Seventh-generation car looks set to build upon the legacy of its illustrious predecessors, says our Man in Detroit Huw Evans...

Against the backdrop of the reformatted North American International Auto Show on September 14, Ford Motor Company revealed its latest Mustang, which will go on sale as a 2024 model. Coded S650, this is not a completely new car, but a significant update of the current S550 which has been around since the 2015 model year. Outwardly, the seventh-generation Ford pony car boasts a heavily updated front fascia and revised rear deck and panel, with angular, LED triple tail-lights. Both coupe and convertible models are offered, the former sporting a roof profile designed to allow driver entry and exit to the cabin with a helmet on (for you, track fans), while the latter sports a one-touch activation power folding top with a single handle to lock the roof in place when up. 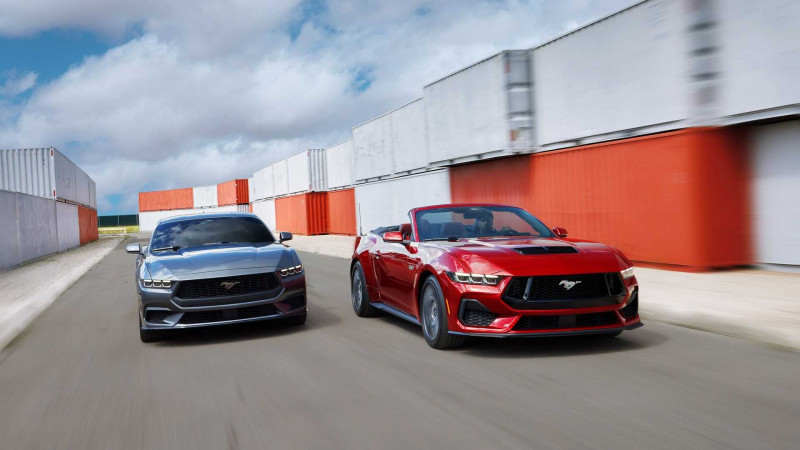 Trim levels on regular Mustangs comprise EcoBoost and GT, powered by updated versions of the 2.3-litre four-cylinder turbocharged and 5.0-litre Coyote V8 engines respectively. The EcoBoost gets a new twin-fuel injection system that combines both port and direct-injection, plus a new twin-scrolled turbocharger and electronic wastegate. Although Ford hadn’t released specific power output figures at the time of launch, the updated EcoBoost is rumoured to deliver more than 330 horsepower. The GT, which is distinguished by a more aggressive front fascia and larger grille opening, new hood vents and revised front splitter, gets an updated version of the fourcam 32-valve Coyote 5.0-litre V8 engine. A new dual-intake box and throttle body set-up are designed to improve airflow and although, like the EcoBoost, Ford hadn’t released specific power figures, it is likely the updated Coyote will generate somewhere around 480 horsepower in factory-stock trim.

Transmissions are carried over, which means a choice of Getrag six-speed manual, or 10-speed automatic. The six-speed manual gearbox sports a rev-match feature on GT models which holds the rpm steady when the clutch is engaged. On seventh-generation Mustangs equipped with the slushbox, Ford is offering a feature called Remote Rev, which allows drivers to start and rev the engine using a special button on the key fob.

Like the outgoing Mustang, the new S650 retains the front-strut and independent integral link rear suspension, but gets revised steering, with a new rack, faster 15.5:1 ratio and revised mounting points to further improve cornering agility and input. Both the EcoBoost and GT models are offered with a Performance Pack option, which adds a front strut tower brace, Torsen limited slip rear differential and available MagneRide active suspension system with wider rear wheels and tyres, plus bigger 390mm front and 355mm rear Brembo brakes. Other Performance Pack features include an active exhaust system, and, on GT models, front brake ducting and upgraded cooling, including a standard auxiliary engine oil cooler. Inside, Performance Pack models get unique Recaro seats and an interesting Electronic Drift Brake feature. Aimed at track enthusiasts, this device, which looks like a traditional handbrake, is designed to allow the driver to progressively lock up the rear wheels, in the same vein as a traditional handbrake, allowing them to enhance their drifting skills.

Inside, the cabin is dominated by a fully digital instrument cluster that can be customised to display different designs and colours, including classic Mustang-style gauges, as well as specific drive modes, including a ‘calming’ minimalist feature. Utilising the same Unreal Engine 3D creation tool technology found in today’s video games, a centre stack display shows the car’s specific settings via real-time graphic rendering. The vehicle’s specific settings can be also adjusted by swiping the graphic which causes the image of the car to rotate in true video gaming style. Additionally, the digital instrument cluster can be optionally configured to flow seamlessly into a 13.2-inch SYNC 4 centre stack behind a single piece of integrated glass that’s angled towards the driver. Assembled at the Flat Rock assembly plant in Michigan, deliveries of the 2024 Mustang for US and Canadian buyers are expected to begin during the summer of 2023.