Vauxhall’s sister brand Opel brings back the iconic manta as a one-off all-electric special to celebrate the coupé’s fiftieth anniversary — looks damn cool to us!

The new Opel Manta GSe ElektroMOD is the latest model to jump on the bandwagon of transforming classic cars into electric-powered ‘RestoMods’, combining the classic visual style of the iconic Manta with Opel’s latest electric powertrain for sustainable motoring. The four-cylinder engine under the black bonnet has been replaced by an electric motor with 108kW (145bhp) and 225Nm of torque. 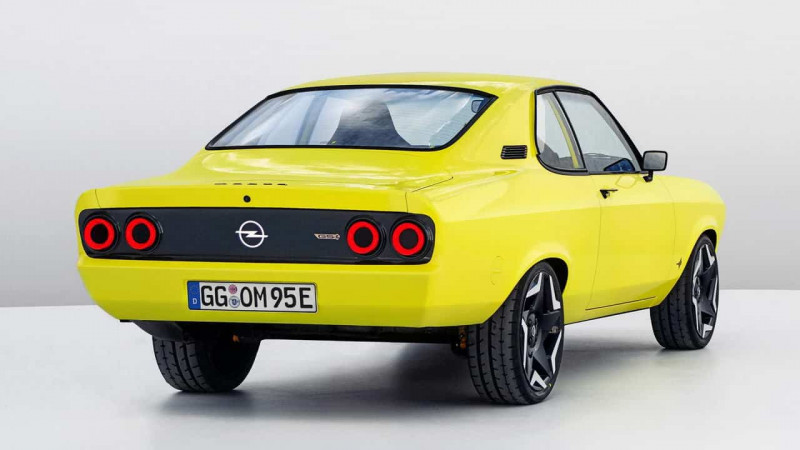 The original car’s four-speed gearbox has been retained, allowing drivers to manually change gears, or simply engage fourth gear and drive automatically. With a 31kWh lithium-ion battery, the Manta GSe has a range of around 124 miles, and like the current Vauxhall electric range, features regenerative braking to improve range. Visually, the Manta GSe features all the original car’s lines, but with a few modern tricks up its sleeve, including a ‘Pixel- Vizor’ front end that stretches across the entire width of the front, with the Pixel technology allowing it to issue messages, such as ‘I am on a zero e-mission’, followed by the silhouette of a manta ray gliding over the Pixel-Vizor. The front end also features LED daylight running lights, while the iconic circular rear lights come with a striking three-dimensional LED design. The yellow paintwork is contrasted by the signature black bonnet, with the wheel arches housing specially designed 17in Ronal alloy wheels with 195/40/17 tyres at the front, and 205/40/17 tyres at the rear.

As expected of a modern RestoMod, the interior of the Manta GSe is packed with the latest Vauxhall digital technology. The classic round instruments have been replaced by the Vauxhall Pure Panel, with two driver oriented 10in and 12in digital displays. The sound system has also been modernised with a new unit from the legendary Marshall brand. The sports seats come with a yellow centre line and offer much more support than the originals, while the steering wheel is a Petri three-spoke wheel reworked by Opel, with a yellow centre line for an added sporty touch. In addition, the cockpit has had a full matt grey retrim, while the roof lining is now clad in Alcantara to complete the makeover of this most modern of classics. Take my money!