It’s not often you see a really new idea in motorcycling but this wild electric land-speed record bike has a touch of mad genius about it. Built by British firm White Motorcycle Concepts using F1 racing technology, the WMC250EV has a radical ‘V-Air’ through-duct to channel high-speed air right through the centre of the bike. That cuts drag by a massive 70%, and, the firm hopes, will help it break UK and world land-speed records. 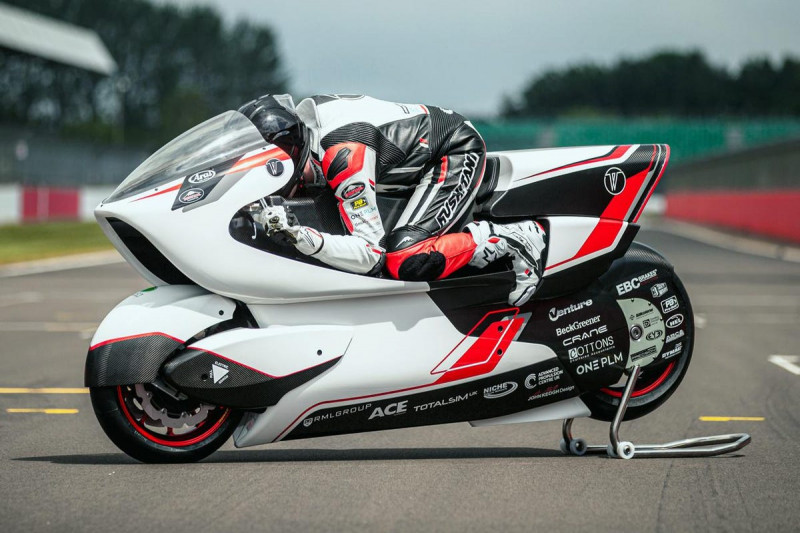 Electric motors drive the front and rear wheels, with the battery pack integrated below the air duct and the rider mounted up high, streamlined into the upper fairing half. The duct is a structural part of the billet aluminium chassis construction, with cable-operated hub-centre steering and all-carbon bodywork.

At about 140bhp, the power output is modest for a land-speed record machine, especially considering the 300kg all-up weight of the WMC250EV. But the aerodynamics are so effective that the firm reckons it should touch 200mph at its first UK record attempt – with 250mph possible with some simple motor upgrades.

“There’s 40kw on the front and 60kw on the rear,” said WMC founder Rob White when we spoke to him. “So 100kw all in, or 137bhp – which isn’t a lot of power. But with the power available and the drag coefficient, we think we’ll be able to snatch 200mph.” White knows how hard it is to hit 200mphplus over the strict measuring conditions needed for a speed record.

“I’ve been riding a Hayabusa in Straightliners for a couple of years so I know a bit about it,” he said. “Historically it’s worked with brute force, but we’re coming at it from a slightly different point of view.”

The V-Air duct doesn’t just cut drag, though. It also boosts stability, with the design helping to reduce lift at speed compared with a conventional machine, as White explains. “The duct removes the centre of pressure from the front of the bike, which reduces lift.

So the front wheel is loaded much more than a conventional bike. We can also create downforce at the rear of the bike; the bottom part of the duct ends at the tyre, and the upper surface of the duct continues on.” And the duct even acts as a massive air brake to aid stopping. “We have an aerodynamic element that sits in the duct to close it to increase drag in the braking zone.”

White is aiming to attack the British record over the next couple of months, at various ex-RAF air bases throughout the country. “We have multiple options in UK for testing over the next 10 weeks. We’re going to Cottesmore, and we’re also looking to run at Straightliners events. I have a relationship with Guy Martin and his Project 300, so there may be opportunities there for us to go testing together. Elvington is the likely choice.”

The WMC250EV will then go on to make an attempt at a world record at the largest salt flat on earth – the Salar de Uyuni in Bolivia, in July 2022.

The speed records are just part of WMC’s plan. The firm’s main aim is to utilise its patented V-Air technology on everyday road bikes, to reduce drag and improve efficiency on more normal machinery. It’s working on the WMC300FR, a 300cc three-wheel hybrid scooter aimed at fast-response vehicles in cities. It includes V-Air technology to reduce drag by 25%, cutting fuel consumption by 18% and boosting performance to around the 500cc level – with much lower emissions.

Longer term, the firm hopes the V-Air could be licenced for use by much bigger firms. “We have UK patents granted, and we have patents pending in Japan, US and Europe,” said White. “We’d like to enter a tech partnership with a major OEM and include it in future motorcycles through licensing. It would be incredible if one of the big four picked it up.”

*We’re looking much more in-depth at the WMC250EV next month.

This is a really new idea in motorcycling