Volvo has announced plans to dramatically increase the range and charging speeds of its future electric cars, whilst also improving safety and infotainment. The raft of changes outlined at the brand’s Tech Moment event, led by Volvo boss Håkan Samuelsson, are aimed at making Volvo a leader in the premium EV sector.

In the near future, its ‘second generation’ of electric cars will focus on improved lithium-ion battery technology and will kick off with the launch of the battery-electric XC90 on an all-new platform in 2022. Volvo confirmed the all-electric XC90 will be equipped with ‘bi-directional charging’, so that owners can transfer power back to the power grid. This allows charging when demand is low and makes it possible to transfer energy when usage and pricing is at its peak. 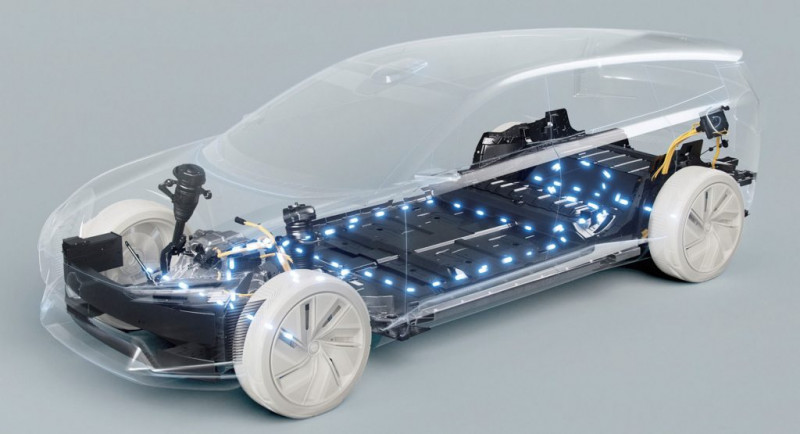 Its ‘third generation’ of EVs will see better integration of the battery pack into the floor of the car, improving vehicle stiffness, according to Volvo. The manufacturer will also ally with Swedish battery provider Northvolt to improve the energy density of its batteries by up to 50%, with the target of 621 miles of ‘real driving range’. Charging times are also expected to be ‘cut almost in half’ by 2025, with battery, software and fast-charging upgrades.

Volvo is also pushing all its battery suppliers to use 100% renewable energy while producing cells, by 2025. Volvo plans to sell only pure electric vehicles by 2030.

The Swedish firm will soon be responsible for its software development, creating a new operating system that it calls VolvoCars.OS, which will allow ‘faster and more flexible development’. It will also offer more regular over-the-air updates to customers to ‘make Volvo cars better every day’, in a move that will compete directly with Tesla’s frequent software updates.

Volvo will centralise the computing of its electric cars into a core system to remove complexity, cutting down on the number of ECUs typically found around its vehicles. Due to be revealed in full in 2022, it will be made up of three main computers responsible for processing and artificial intelligence, general computing and infotainment, respectively. It will be co-developed with Google and computer chip giant NVIDIA, and early mock-ups show vehicles will have a large central tablet, a smaller instrument display and a head-up display.

Volvo plans to harvest traffic data from ‘real-life situations’ in customer cars to help it improve safety more rapidly, allowing ‘continuous and much faster improvements to its cars’. This will include data from sensors such as high-resolution LiDAR that’s being developed by Luminar. The plan will let engineers ‘validate and verify autonomous drive features quicker’, helping Volvo rollout its semi-autonomous driving features more quickly than using ‘a limited number of cars on a test track.’ Once updates have been verified, they can be ‘rolled out rapidly’ via over-the-air updates, so that the benefits and safety increases will arrive step by step.

To harness the data, Volvo is partnering with Zenseact in a data factory that’s expected to hold more than 200 PetaBytes (225 million gigabytes) of data within a few years. This data will be processed using artificial intelligence, and customers can choose if their data is collected.

A LiDAR sensor will be fitted as standard to Volvo’s flagship electric SUV, along with an autonomous driving computer powered by a bespoke NVIDIA ‘system-on-a-chip’.

Volvo’s next generation of infotainment systems will fall under the VolvoCars.OS umbrella. Arriving in cars from next year, it is being co-developed with Google, with the technology giant already supplying its Android OS system for the latest Volvo and Polestar models.

A large, portrait and tablet-style touchscreen will dominate proceedings, and Volvo will also provide information to the driver via a head-up display. A smaller, high-resolution driver information screen will also sit behind the steering wheel, giving the driver ‘the most relevant information’ such as the car’s speed and battery levels.

The central touchscreen will ensure ‘everything customers need should always be easily accessible’ either via touch, or with a voice command. Volvo claims no immediate ‘needs or information’ will be buried within menus. Only the right information will be displayed at the right time to help boost the user experience and safety. Next-generation Volvos will also use compatible phones as a key, and the Volvo Cars smartphone app will allow owners to take care of tasks like charging and connecting to the car and home devices.

Volvo also took the opportunity to announce its Concept Recharge vehicle, which represents a ‘new paradigm in car design’ according to the manufacturer. Based around the mantra ‘less but better’, the car’s proportions have been changed to make the most of its electric powertrain, with more interior space and improved aerodynamic efficiency.

It represents a move away from first-generation Volvo EVs based on platforms shared with combustion-engined models. Instead, the next generation will feature flat floors, allowing designers to dramatically extend wheelbases, increase interior space and storage and reposition the seats.

The new styling direction includes a move to closed grilles, replaced with a ‘shield-like structure’, and a new take on Volvo’s Thor’s Hammer headlights and LED daytime running lights. Concept Recharge’s rear lights are in the traditional vertical layout, but now feature wings that extend at cruising speeds to improve aerodynamics. “Our Concept Recharge represents a manifesto for the all-electric future of Volvo Cars, as well as a new type of vehicle,” said Robin Page, Volvo’s design boss. “It displays new and modern proportions that go hand in hand with increased versatility and shows what technology can enable in terms of design.”

Inside, a 15-inch touchscreen takes centre stage, and previews Volvo’s next-generation infotainment system. To reflect Volvo’s safety ambitions, the Concept Recharge is also fitted with a LiDAR sensor, placed in a prime position on its roof to collect data from around the car.