Renowned motoring writer Roger Bell died on 6 March. He was 85. An accomplished technical author, he rose through the ranks to become editor of Motor. Bell’s authoritative prose were read by many during a time when the motoring weekly had a massive audience. It didn’t matter whether he was evaluating a Ford Corsair or keeping his foot in and braving John Woolfe’s Shelby/ AC Cobra 427 at 150mph, readers trusted his judgements as did manufacturers (sometimes through gritted teeth). During the 1970s and ’80s, he also gave many future big names a leg-up, not least the likes of brothers Tony and Peter Dron and Mark Hales.

Bell was also a handy driver in saloon car racing. He was invited to drive a Motor-backed car in the 1971 Ford Mexico Challenge one-make series. Bell was up against the likes of Gerry Marshall and Barrie ‘Whizzo’ Williams, not to mention soon-to-be F1 legend Jody Scheckter. He didn’t disappoint, finishing fifth in the series. In subsequent seasons, he dovetailed his editorship with racing BMWs and Alfa Romeos in ProdSaloons before graduating to the premier British Saloon Car Championship (now British Touring Car Championship). In 1975, he was team-mate to Andy Rouse in a works Triumph Team Piranha Dolomite.

Bell’s prose subsequently appeared in CAR and Supercar Classics, and in the 1990s he worked as a freelancer for titles such as Classic & Sports Car prior to retiring. He later suffered from Parkinson’s disease but continued to show an interest in the industry and motor racing to the last.

Roger Bell was a leading automotive journalist who joined Motor magazine as a young man in 1959. In Jaguar terms, it’s interesting to note that he was delegated the job of compiling the magazine’s first road test of the new Mark X.

The test appeared in November 1963 and was remarkably critical at a time when some journalists enjoyed a rather too-friendly relationship with manufacturers, and tended to gloss over faults and failings in new models. But not Roger, and in the case of the Mark X, refinement, powertrain noise, the ‘skin-deep quality’ of the woodwork, inefficient heating and an ‘absurd lack of lateral support’ from the seats, were features he commented adversely on. After the test was published, Roger was invited to Browns Lane ‘for a chat’ and he was somewhat taken aback when on arrival he was ushered into a room full of engineers and given a good grilling! But his observations were basically fair and he became a leading road tester, before being promoted to Editor of Motor in 1973.

I had joined Motor in April 1966 and two years later it was Roger who gave me my first drive of an E-type – a story I have related before in these pages. The magazine had borrowed a press E-type roadster (JDU 877E) for a Group Test, and after it had returned from being belted round north Wales, I found on my desk a note from Roger which said something like, ‘In view of your interest in Jaguar, you might like to take the E-type for the weekend’. Would I like to?! So, there followed two days of great joy, driving this yellow ultra-high-performance two-seater Jaguar around the countryside. All these years later I still deeply appreciate Roger’s thoughtfulness. Roger was a fine driver and was highly successful in the British Touring Car Championship in the early/mid-1970s, being runner-up in his Class twice. He drove mainly 3.0 litre BMWs for Dealer Team BMW, but piloted other marques too.

He left Motor in 1981 to edit Thoroughbred & Classic Cars and contributed as a freelance to various other titles and newspapers – so when I conceived a bookstall magazine on Jaguar (Jaguar Quarterly), Roger was one of the first writers I turned to. In the first issue of JQ, published in the autumn of 1988, he wrote an informed piece on three modified Jaguars we had assembled for him – Janspeed XJ6 Turbo, Lister XJ-S and Lynx Performer. Later, he tested JaguarSport products for us. In recent years, Roger suffered from Parkinson’s and it was sad he eventually succumbed to the disease. But I will always remember him with gratitude and admiration.

The yellow E-type Series 1 1/2, which Roger Bell allowed Paul to drive can be seen amongst other cars on this 1968 Group Test. Roger Bell, journalist, editor, author and race driver, pictured around 1970. 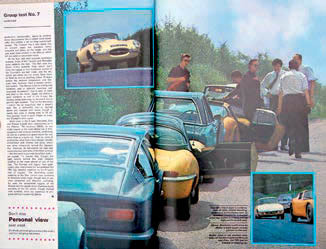 The photo is not of the Roger Bell referred to in the obituary which was originally penned by Paul Skilleter although not acknowledged as such. It is of Roger Bell-Ogilby who works for Bonhams Motoring Department.

That is not a photo of Roger Bell.

To get a photo of Roger, contact either his son Tim Bell or Jeff Bloxham. Both are on Facebook.

Do this ASAP please. And then at least give Paul Skilleter the credit that is due. At present, some people will imagine that Dan Bevis was on the staff of Motor. Is Dan Bevis a real person or a pseudonym?

By the way, how is your friend Butt-Head?

Hello. Is there anyone thre?