Gooding & Company has announced a group of exceptional consignments for its highly anticipated upcoming London Auction, set to take place in conjunction with the Concours of Elegance at Hampton Court Palace on 3rd September. The star of the show is an extraordinary 1956 Porsche 550 Spyder.

“To have the chance to unveil this historic Porsche publicly for the first time in over three decades is especially exciting. It will be an unforgettable experience to witness such a historically significant Porsche see the light of day for the first time in a very long while,” says Gooding & Company European Sales Consultant, Joe Twyman. 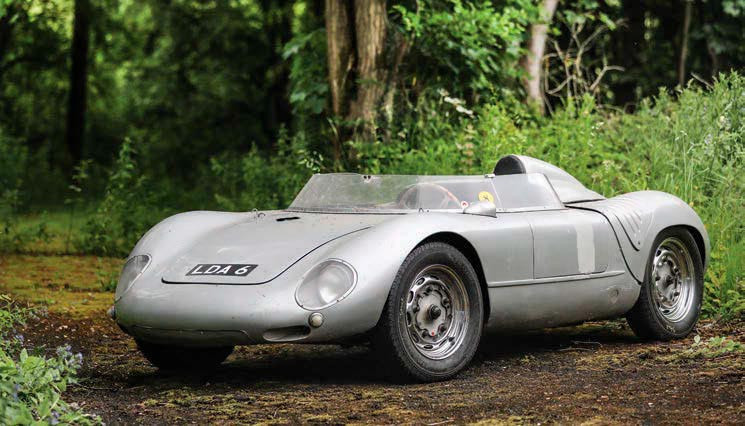 A purpose-built competition car which elevated Porsche’s motorsport status in the early part of the company’s long and fruitful history, the 550 Spyder quickly became one of the world’s most important race cars, clocking significant achievements at the Nürburgring, Le Mans, Carrera Panamericana and Buenos Aires. This particular 550 Spyder, chassis 550- 0079, was completed on 2nd February 1956 and was subsequently depicted in a promotional photograph taken outside the Porsche factory and published in a bid to demonstrate the wide range of colour options available for 550 buyers.

To this end, chassis 0079 was originally finished in red with white darts. The car’s buyer was Rita Rampinelli, a notable Swiss female racing driver who briefly competed with her new Porsche before passing ownership to fellow Swiss competitor, Heinz Schiller. Schiller campaigned the car across Europe at many well-known circuits, including Monza and Avus, as well as in his home country. The car was then owned by a third racing driver, Edouard Margairaz, who mainly entered the Porsche in hill climb events.

From 1957, the 718 RSK was even more successful than the 550 Spyder and yielded the 160bhp RS 60 variant, powered by the normally aspirated Type 547/3 flat-four developed by Porsche for participation in Formula One. In light of this improved specification, during the 1960s, 550 Spyder chassis 0079 was forward-dated with many RS 60 components, thereby bringing the car’s performance in line with newer Porsche racing metal. The modifications included a new engine and RS 60 bodywork, which the car still wears, hence its unusual appearance. 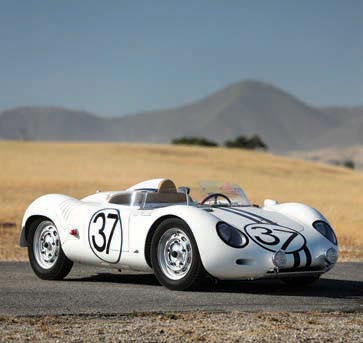