For much of its existence since 1978, the Ford Falcon XC Cobra has been something of an orphan, a side story in the rich tapestry of collectable Australian muscle cars. But that has changed over the last few years, with the Cobra becoming increasingly appreciated – as well as increasingly appreciating in market value. The car featured here recently changed hands for as much as $600,000 – it is the rarest of rare Cobras, one of only 30 Bathurst homologation special Cobras built as part of the run of 400 cars, unrestored and unmolested. Story: Stewart Wilson.

These days any Falcon hardtop in pretty much any conditions is a thing of some value.

They’re celebrated by Ford fans for the classic Aussie muscle that they are – although they weren’t always viewed with such fondness.

In fact, how the XA-B-C two-door Falcon Hardtop series Hardtops are cherished today is something the Ford execs in the late ‘70s couldn’t have imagined in their wildest dreams. Back then, they were struggling to give the things away. 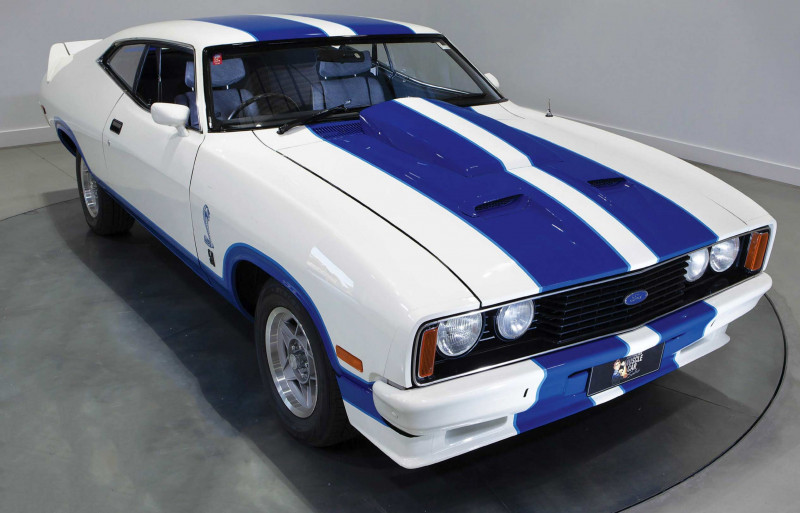 In 1978 the Hardtop coupe was in its seventh and ­ final year of production. A new era was dawning as the ‘80s approached. Big coupes were out of style as the automotive market embraced the trend to the smaller, more angular lines of the European car makers. Holden’s all-new VB Commodore was a case in point; Ford was preparing to launch its new squared-off, slimmed back version of the Falcon in the XD model the following year.

So, as Ford geared up for XD production to begin, what was to be done about the stockpile of 400 brand new Hardtop bodyshells for which there seemed no buyers?

Ford simply did what car makers usually do in such circumstances: create a special limited-edition version. 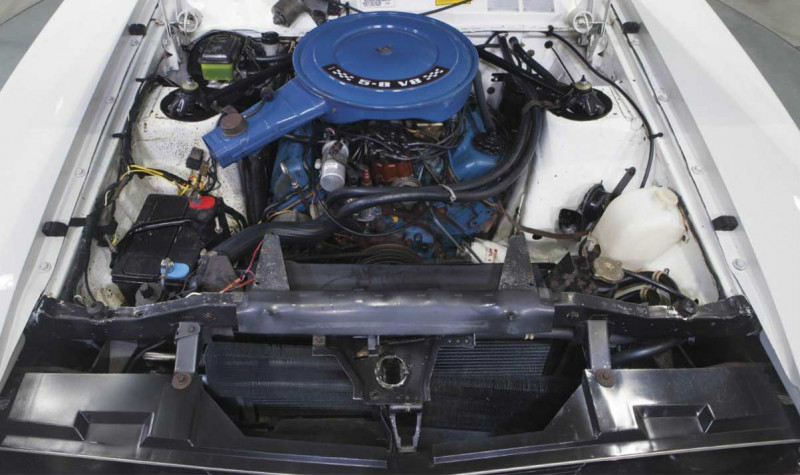 The Cobra may have been little more than a marketing exercise to move those soon-toe-be-obsolete hardtops through Ford dealer showrooms. The more cynical might even have suggested it was a shameless attempt at associating the car with the Ford high-performance Shelby name, but without the performance to match.

This Cobra certainly was no Shelby. Yet in other ways it did have a certain blue oval authenticity: the Falcon Cobra was, after all, the brainchild of Edsel Ford II, the great grandson of company’s founder, Henry Ford, who was on secondment to Ford Australia as assistant managing director as part of his ‘education’ to move up the ranks within the company. So this was a Ford created by a Ford.

Four hundred Falcon Cobras were completed, each car individually numbered 001 to 400 with a glovebox-mounted badge to proclaim which one it was.

The Cobra was available in only one colour scheme – Sno White with bold blue Shelbyesque stripes running lengthwise over the boot, roof and bonnet of the car. Stylised Cobra decals completed the exterior decorations. 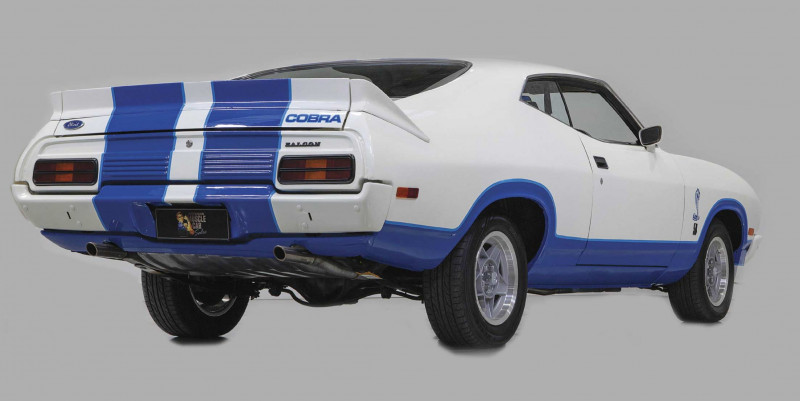 The first Cobra was completed in April, 1978, and production began three months later. Released in August 1978 in time for the major long distance Championship of Makes races at Sandown and Bathurst, the Cobras were of course the last Falcon Hardtops built, and at $8,705 for the base 302 manual and $10,333 for the Bathurst edition, they represented good value for money.

Most of the 400 were ordinary or garden variety V8 hardtops with either the 5.8-litre (351 cubic-inch) or the 4.9 (302) engines with manual or automatic transmissions. The effects of the dreaded emission controls of the late ‘70s had reduced the 5.8’s brochure ­figure power to a relatively puny 217hp (162kW) despite four-barrel carburation and a more efficient exhaust system. The 4.9-litre engine was listed as producing 202bhp (151kw).

Thirty of the 400 Cobras were very special. Called the Option 97 Bathurst model, they were the last Australian Fords built speci­fically as homologation specials for racing. The car featured here is Cobra number 31, the last Bathurst model built and the car which recently changed hands.

Its selling price of $600,000 well and truly puts the Bathurst Cobra on the list of desirable and collectable Falcons.

The ­ first Falcon Cobra (number 001) was a 302 automatic which became the Ford press car while numbers 002 to 003 were the Option 97 Bathurst homologation specials. All Cobras were given such niceties as four-wheel disc brakes, limited slip differential, Globe ‘Bathurst’ alloy wheels, laminated windscreen, driving lights, spoilers, and bonnet air scoops.

Most of these were intended to improve reliability rather than performance, and some had already been incorporated in a small number of production Falcons. In December, 1977, Ford built 13 XC Falcon GS Bathurst evolution hardtops to special order with homologated upgrades that could be applied to racing Falcons from early 1978. These upgrades formed the basis of those ­ fitted to the 30 Option 97 Cobras.

As for the Cobra road car, performance ­figures were the same as any other XC Falcon hardtop with 351 engine and manual gearbox: 0-100km/h acceleration in 8.9 seconds; 0-400 metres in 16.0 seconds and a maximum speed of about 211km/h.

All Cobras attracted arti­ficially high ‘black market’ prices initially, when demand outstripped supply. These prices quickly settled down to more sensible levels, but over the years as their signi­ficance and extreme rarity came to be recognised and appreciated, the Option 97 Bathurst cars in particular have steadily increased in value.

Built in September 1978, Cobra 31 is of special interest for not only its rarity as one of the 30 Option 97 cars but also as it is the last of them. An interesting point is that although these cars were produced to homologate new parts for the Falcon Hardtop race cars, none of them was ever converted into a race car.

In fact, most of the 30 Bathurst cars have been stored since new, with only delivery mileage on their odometers. A few have spent a bit of time on the road and logged low mileages, while Cobra 31’s various owners have recorded about 57,000km over the years.

As a result this car is an original, unrestored example with some road history behind it, something which in itself is of interest and separates it from most of the other cars. The car has been well looked after – ‘largely unmolested’ is one description applied to it – and is in excellent condition with its mostly original paint, original engine bay and boot and original interior. Everything works as it should, all the documentation and numbers match and it does not require any restoration work.

As an investment, the car is pretty much a sure thing. The upwards trend in Bathurst Cobra values is already happening with sales of three cars reaching between $400,000 and $462,000 about three years ago. Cobra 31’s sale price of $600,000 represents 30 percent increase since then.

An interesting point is that although these cars were produced to homologate new parts for the Falcon Hardtop race cars, none of them was ever converted into a race car.

This rare low-mileage, unrestored and unmolested Bathurst homologation XC Cobra was sold through Australian Muscle Car Sales late in 2021 for an unprecedented $600,000. The Bathurst Cobra specials had various niceties not available on the standard Cobras, including shock tower bracing and larger radiator. Brian Wood Ford ran a full-page ad for Bathurst Cobra #18 in Motor Manual magazine. It looked the goods even if it was not much more than a cynical marketing exercise aimed at moving surplus Hardtop stock Ford was having trouble selling. Fast forward more than 40 years and the XC Falcon Cobra is a sought-after Ford. Edsel Ford II.