With modern vehicles becoming increasingly homogenised, Evans ponders on the need to preserve 20th century car culture so future generations can appreciate how distinctive it is.

I was having a conversation with a friend and owner of a restoration shop the other day and the topic turned to new cars. He asked what I would buy if I was in the market for a car. In the past that wasn’t usually a difficult question, but this time I really had to think about it. I’ve long considered myself what they call a ‘car guy’ out here in the colonies and growing up I knew every make and model of car on the road. Today (and perhaps it is just a result of getting older), almost every other sedan or crossover utility looks like another. It’s almost as if personal transportation devices have been so homogenised in North America that vehicle ownership today is about the connectivity features on the inside, not what engine is under the hood, or how capable off-road the thing is.

Personally, I think this is rather sad. Back in the 20th century, buying a car, either new or used, was an experience. The way it looked, the way it drove, the way it sounded; these were all important attributes and factors that differentiated one vehicle from another. Cars were a part of the family, not some four-wheeled toaster or microwave to just get us from one place to another. When marketers and business analysts discuss the lack of interest in driving among today’s youth, I’m not surprised. Modern cars don’t exactly get the pulse racing in many cases. Even when it comes to performance offerings, while they may boast obscene levels of horsepower or torque and incredible test statistics – every time I drive one, I feel there is just something that seems lacking.

Which is why, the older I get, the more I seem to gravitate towards classics. Even the cars that were new 25 years ago and are now on the verge of collector car status hold far more appeal for me than what’s available in showrooms right now. I hark back to Pontiac’s ad slogan back in the late Eighties: We Build Excitement. Even today, cars like the Firebird Trans Am GTA and Formula, Grand Prix GTP, 6000 STE and Sunbird Turbo still hold a certain appeal; provided you can actually find them.

Times change, people, trends and technology move on, but it somehow seems that culturally, things haven’t progressed a great deal in the last quarter century. Which is why I think we, as car enthusiasts, have a mission to not only preserve our beloved artefacts from a bygone age but to ensure that future generations get to experience them and understand them the same way that we did. I think by doing so we can show them there was a time where cars were fun, involving and truly exciting to drive.

And I feel a big part of being able to do that, especially now, in the post-Covid era, is by organising events that can really showcase what old cars are all about, events where people have a chance to go driving, cruising and even racing in them. One of my favourite car-related events over here is the Woodward Dream Cruise, which takes place in the Detroit suburbs on the third Saturday in August. Along a 16-mile stretch of the famous Woodward Avenue (a street racing mecca in the Fifties and Sixties), cars, vans and trucks of all shapes and sizes cruise up and down the street. It’s like a car carnival come to life.

Whether you want to partake in the cruise or pull up and stop off at one of the many carrelated events along the route, it’s a fantastic day out with so much to see and do. In the west, Reno, Nevada hosts something similar, called Hot August Nights and if you haven’t been to either of these events I recommend you do attend them at least once in your life.

Getting back to modern vehicles, will there come a day when our daily transportation is demoted to soulless electric modules that move us about autonomously from one place to another?

Possibly, but if we, as enthusiasts and custodians of classic iron, do our part and keep the passion alive, there’s every chance that in the distant future, somebody that gets dropped off at home by one of these conveyances will open their garage, fire up their vintage steed and revel in the sounds of an internal combustion engine bellowing through a dual exhaust, the tyres chirping as they hit second gear. Long live excitement! 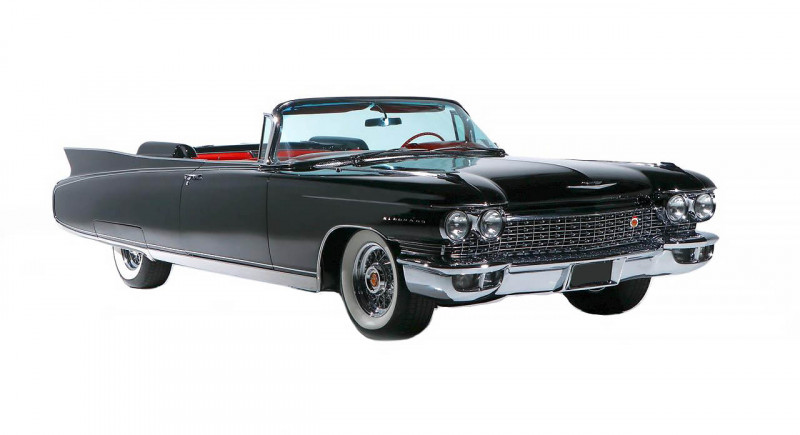 1960 Cadillac. From this to this, the Cadillac LYRIQ.