The XC40 is Volvo’s first foray into the compact SUV market, and will soon be followed up by a SUV-Coupé edition named C40, though that car will be exclusively pure-electric and sold online. As the XC40 didn’t have a predecessor to worry about, all of the people that bought the XC40 were new to the brand, though there might have been a few V40 owners upgrading and perhaps some XC60 customers downsizing. The story of the XC40 started in May 2016, when Volvo revealed a pair of concept cars.

Concept 40.1 indicated what the XC40 would look like, and Concept 40.2 was the precursor to the Polestar 2. Both featured a fashionable jacked up design and have seen production largely unchanged. It wasn’t until September 2017 that we saw the final production version of the XC40, with the first cars arriving in UK showrooms in the following February, initially in upmarket First Edition guise. Volvo’s newcomer was exceptionally well received, as not only has it won European Car of the Year in 2018, but it also grabbed the 2018 Car of the Year award from this very title. 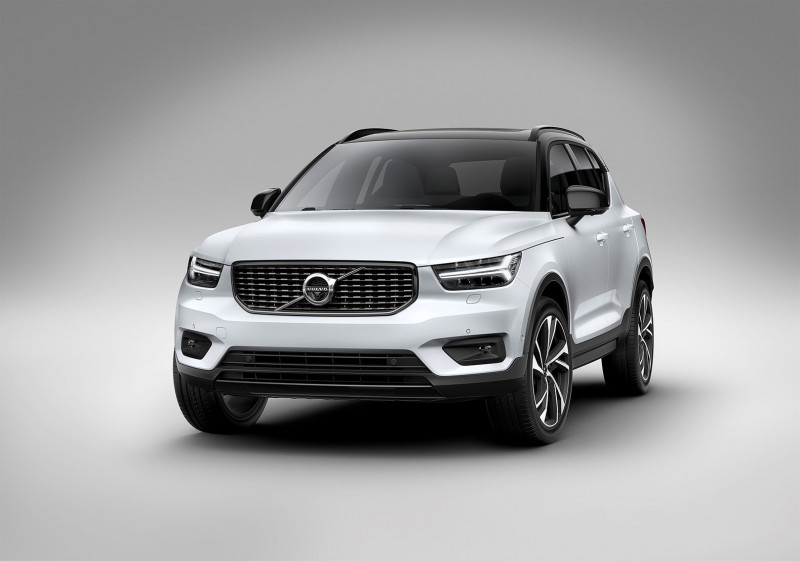 At launch, there were three trim levels – Momentum, R-Design and Inscription – each delivering a distinctly different ambience. Momentum is the entry into XC40 ownership, while the R-Design models adds a sporty flavour. It is up to the Inscription versions to deliver a dose of luxury to the compact SUV range. Each of the trim levels are available as Pro editions, each featuring additional equipment.

The engine range consisted of a pair of 2.0-litre diesel engines with 148 (D3) and 188bhp (D4) power outputs. The lower engine was offered with both front- and all-wheel-drive and a choice of manual or automatic transmission. By contrast, the 188bhp D4 model was sold exclusively with an automatic gearbox and all-wheel-drive. First Edition models were discontinued in March 2018, while manual gearbox versions of the D3 all-wheel drive were axed in May 2018. In February 2020 it was time for the Momentum Pro models to be stopped, and in a surprise move, all diesel engines were removed from the range in August 2020. And we say surprising, because at the time the derv variants accounted for 20% of all XC40 sales. It was a bit of a gamble for the Swedish firm, as it pursued an electrified plug-in future.

What equipment do you get?

Just one update to equipment in the life of the XC40 and that was in July 2019 when paddleshifts became standard on automatic editions, as well as power folding door mirrors, a 12-volt power outlet in the cargo area, a locking glovebox and a load protection net.

If you’ve experienced any of the new generation of Volvo’s, you’ll be instantly at home, with a nine-inch portrait orientated touchscreen dominating the centre of the cabin. The hi-tech feel is backed up by a 12.3-inch digital instrument cluster and a short, stubby automatic transmission lever that feels modern. Manual editions stick with a traditional gear lever. Interesting inlays and dashboard appliqués complete the striking interior look. All of the materials high up are nicely squidgy and top quality, though the further you move down, the harder the surfaces become, particularly in the rear, where the plastics are hard and scratchy. The driving position is excellent, multi-adjustable and with a lovely, elevated seating position and chairs that offer good comfort levels. The touchscreen is logical and easy to navigate, though it’s sometimes difficult to adjust the temperature settings using the sliding scale, and physical buttons on the dashboard would be far more intuitive – the kind of dial that you’ll find for the volume of the audio system, which feels great and is easy to locate and operate. Space for both front and back seat occupants is good, with generous leg, head and kneeroom. There’s plenty of space for oddments too, with a large bin underneath the centre stack, a deep armrest cubby, enormous door pockets and a pair of cupholders, though the glovebox is quite small. Boot space is a two-tier design and folding down the rear chairs opens the space from 460 litres to 1,336. With the divider in the upper position, it provides a flat surface, though beware that the seats are pretty heavy to fold down, and the sill to haul your luggage over is relatively high.

The 148bhp D3 models offer more than sufficient performance, but it’s the most powerful XC40 that delivers lots of zip away from rest, with excellent mid-range overtaking punch. The 188bhp 2.0-litre D4 unit is paired exclusively with an eight-speed automatic transmission, and that’s a bit of a shame, as it can be a bit slow witted at times. The homegrown four-cylinder powerplant is quiet, even when you’ve got the accelerator pedal buried in the footwell, and though you’ll hear a little tyre and road noise, it’s certainly not intrusive, while wind flutter is nicely dialled out. Thanks to its quick steering, the XC40 feels quite agile to hustle along an entertaining B-road, with good precision and accuracy and great manoeuvrability around town. It’s good fun to pilot and has little in the way of body lean through corners and plenty of grip, feeling more like a hot hatchback than an SUV. But the real ace in the pack is the suspension that is incredibly supple. It soaks up potholes really nicely, shrugs off speed humps, and is a great companion on a long-distance motorway schlep.

What are the running costs?

From April 2017, all car buyers pay the same rate of vehicle excise duty at £155 per annum, but you’ll need to watch out that the car you are buying didn’t cost more than £40,000 when new. If that’s the case, a premium tax is added and you’ll end up with a bill of £490 for years two to six, with year seven back down to the standard rate, which is currently £155.

As you’ll see from the facts and figures matrix, different versions of the XC40 produce different levels of CO2 emissions and that’s all down to the size of the wheels. While it only makes a difference of a gram or two, this then translates into differences to the fuel economy figures, too, as there is a direct correlation between the two. Key dates in the diary are April 2019 when the fuel economy figures moved from the old NEDC way of calculating them to the newer WLTP figures. And there was a similar jump in April 2020 when the CO2 emissions were brought into line with the newer WLTP testing, too. Ultimately, the figures may have changed, but the cars didn’t, so think of these revised figures as a truer reflection upon what the XC40 can achieve.

Opt for the D3 model, whether that be front- or all-wheel drive and insurance will fall between group 22 and 24, no matter which trim level you opt for. It’s only the more powerful D4 versions that jump up to between 29 and 30, and that’s hardly earth shatteringly bad. Servicing is required every 18,000 miles and the original warranty was three years or 60,000 miles. The earliest cars will no be out of warranty, so it pays to shop around and choose one with some cover left, if not just for peace of mind. You can then get anything that isn’t functioning properly resolved before the warranty expires.

It’s a familiar story. A new car is launched with the option of a diesel engine, only for it to be dropped in favour of an electrified unit. The Volvo XC40 arrived in 2018 with a pair of 2.0-litre diesels, but the D3 and D4 variants were removed from the price lists in 2020. Volvo said the decision was part of its ‘ambitious global electrification strategy, which includes our well-established commitment to the phasing out of diesel in the long term. It also reflects the strong shift in customer demands towards petrol and electrified models.’ According to Autocar, diesel accounted for 36.5 per cent of the XC40’s UK sales mix in 2019, before dropping to 19 per cent in 2020. That still represents one in five of all XC40s sold in the UK. Hardly surprising, then, that there’s a good selection of used diesel XC40s to choose from. Great news, because the D3 and D4 versions are two of the most convincing variants of this highly appealing compact SUV.

Most people should be happy with the front-wheel drive 148bhp D3. You won’t get close to the official fuel economy, but the Honest John Real MPG data suggests that 48.5mpg is realistic. This drops to 45.4mpg if you opt for the eight-speed automatic, which is preferable to the six-speed manual. If you must have all-wheel drive, it’s best to opt for the 188bhp D4. It’s auto-only, which means 38.6mpg from the D3 and 37.5mpg from the D4, according to the Honest John figures.

A Volvo Selekt used car provides an unlimited mileage manufacturer-approved warranty of at least 12 months and 12 months’ Volvo Assistance. There’s a 30 day or 1,500-mile exchange programme and MOT care included within the price, which covers the cost of repairing, replacing or adjusting specific defective parts in the event that your car doesn’t pass its next MOT. More than 150 checks are carried out by Volvo technicians and the latest software is downloaded to the car.

Reputable companies like Celtic Tuning, Tunit and Avon Tuning offer a range of tuning options, suited to both extra muscle and fuel efficiency gains. Power and torque increases aren’t the whole story though, and so you should always discuss your requirements directly with your chosen tuning company, whether it be extra performance, improved fuel economy or additional pulling power. Please be aware that any increase may mean that you put extra pressure on the gearbox and clutch, not to mention the braking system, and so you should consider uprating these areas, too. But more importantly, any kind of modification needs to be revealed to your insurance company. See our Trusted Tuners section for details of companies that our team have experience of and are recommended.