Well over two years in development, the RennTech S76R is the most powerful naturally aspirated 140-series S-Class in existence. Mercedes-Benz Enthusiast spoke exclusively to its creators...

REVIVAL OF THE FITTEST 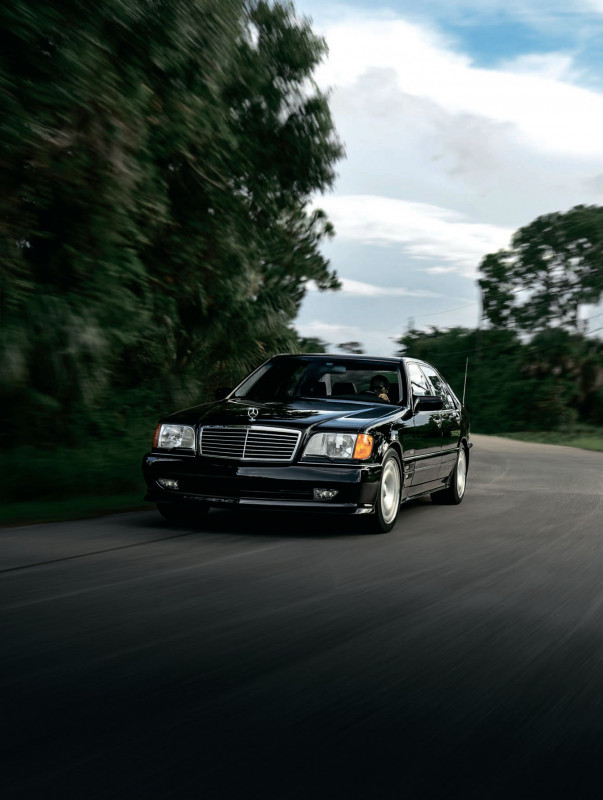 There are many stories about the gestation of the Bruno Sacco-designed W140 S-Class, the most well-known being how its 18-month development delay and cost over-runs triggered the resignation of engineering chief Wolfgang Peter. A lesser known fact is that this significant delay allowed the engineers to complete development of the all-new M120 V12 and adapt the 140-series’s engine bay to accommodate it, while specific suspension and brake components were also upgraded to handle the extra power and weight. Final development prototypes were completed in June 1990, with pilot production models built between June 1990 to January 1991 in time for the media launch. 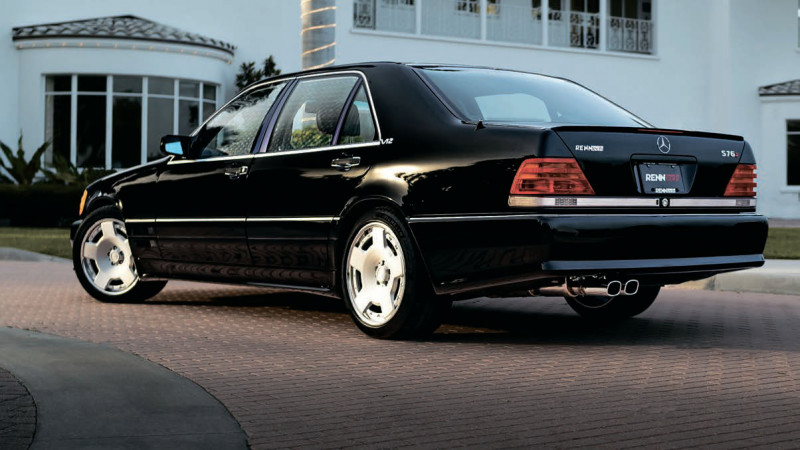 The biggest and most bombastic German luxury saloon of the 1990s, the long-wheelbase 600SEL/S600 L, was acknowledged as the supreme autobahn stormer. For some, however, the V12’s 402bhp and 428lb ft of torque was not enough, and soon AMG, Brabus and RennTech were busy exploring the outer limits of this incredible engine’s tuning envelope. In the end Brabus won the contest, the 574bhp and 568lb ft of torque of its 7.3 S motor propelling the W210-based E V12 into the Guinness Book of Records as the ‘World’s Fastest Production Saloon’ in October 1996. 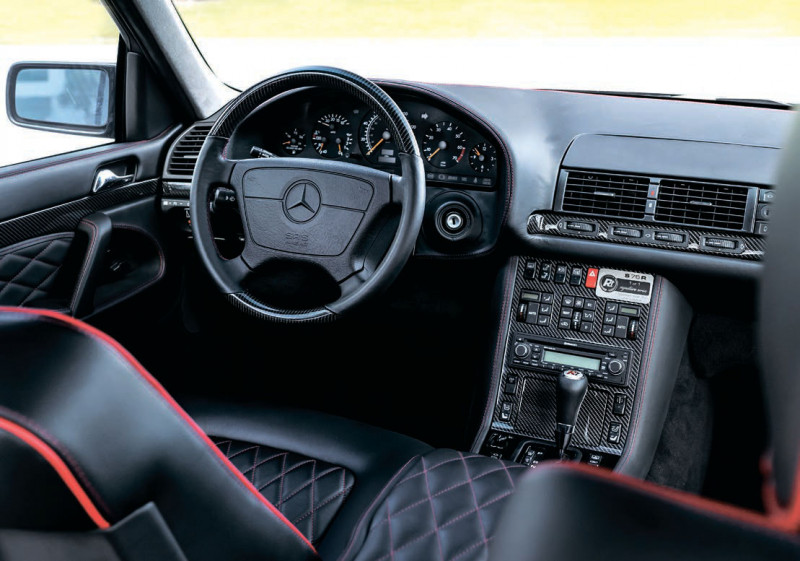 Fast forward a quarter of a century to 2022, and Florida-based RennTech recently handed this 600SEL-based S76R back to its owner. “He’s a local client who first came to us with his W221 S65 AMG about six years ago,” explained RennTech boss Hartmut Feyhl. “He likes big sedans and has an eclectic car collection that includes classic Italian, British and American cars and a few Porsches. He does not follow any so-called trend, and simply enjoys driving.

“However, he did not have a W140 in his collection and was looking for a good base car for a retromod project,” Hartmut recalled. “I offered to find a good donor car but he insisted on searching for himself. He came up with a nice example, but it was an early 1992 model, which set off a cascade of issues that took a lot of time and money to resolve.” 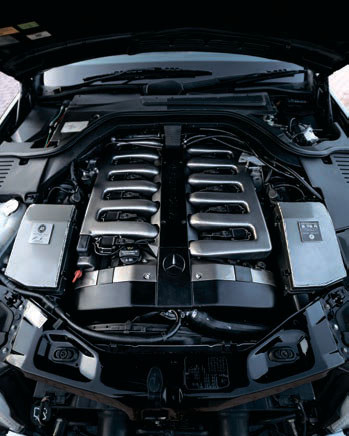 The main problem was the Bosch LH-Jetronic that fuels the V12 in the first series 600SE/L. Compared to the Motronic ME1.0 used on the MY1995-on version, it lacks the adjustability to control a tuned, larger displacement conversion. This 1992 car also has the four-speed rather than the five-speed automatic that came later. “While the car had low mileage and excellent bodywork and paint, it came with a brown leather interior without the full leather dashboard option,” Hartmut explained. “The owner wanted a full black leather interior and we thought we could just swap out all the ‘wrong’ bits. But the actual changes required came as a big surprise.”

Mercedes-Benz created more components than you would think just for their trim options. For instance, the moulding for the optional leather covered dashtop is reinforced to cope with the twisting forces imposed by leather shrinkage over time, while the double stitch feature on the full leather dashtop requires grooves in the moulding. You can’t just buy these dash tops off the shelf from a Mercedes dealer 25 years later, so RennTech had to modify the basic vinyl covered dashtop of the donor car.

The company ended up buying a cheaper, higher mileage donor car for the Bosch Motronic ME 1.0 along with some other parts, and the model year upgrade alone added nearly six months and additional costs to the project. More than just a cosmetic facelift, the MY1995 facelift S-Class was also a significant engineering upgrade. The wiring harness had to incorporate many new control and convenience features that added additional ECUs and unique connectors to the CAN bus system. There was also a different engine bay wiring loom as the whole Bosch fuelling system has wiring for the throttle body, air mass sensor and so on.

All this took place leading up to the Covid-19 pandemic, during which everything shut down and one staff member retired. Factor in pandemic-related supply chain issues and an extra year was added to the 18 months originally allocated to the project.

The engine is the heart of any car, and here RennTech has really done itself proud. “In the days when AMG and Brabus were making 7.3 litre conversions, we had a slightly longer stroke that achieved a real 7.4-litre displacement with 7,414cc from a 91.0mm and 95.0mm bore and stroke,” said Hartmut. “The first few M120 conversions we did were 7.1s with crankshaft mods alone. Our mainstream 7.4-litre conversion used US-made steel billet cranks and KS [Kolbenschmidt] pistons linked by forged titanium con rods.”

Hartmut was mindful of future rebuilds and commissioned a few sets of 92mm over-sized pistons for stock just in case a block was damaged and needed to be over-bored. However, by the time the M120 went out of production in 1998 RT had never experienced a problem with this bulletproof engine and started using its over-sized piston stock for even larger displacement conversions.

These 92mm-diameter pistons took swept displacement to 7,578cc, and the first such motor was installed in a California-based R129 SL that Hartmut remembers fondly. This was a very late production SL600 to which Mercedes had fitted the improved smaller ABS unit and cleaned up other parts of the engine bay. The extra room allowed RennTech to use a larger airbox, which liberated extra power. Sadly, the owner took the car to a local detail where one of the staff had a Ferris Bueller moment and crashed it.

“I was looking for more aggressive cams, and one of my German sources offered me some special development intake cams that AMG had made for the Pagani Zonda,” he continued. “Together with our larger air boxes and equal length headers this showed over 600hp on the first dyno pull, and 615hp after some fine adjustments to the camshaft timing.

“The Bosch Motronic ME 1.0 has its limits because it is a first-generation Motronic with a single-core processor per cylinder bank. You can adjust the ignition, fuelling and intake cam phasing, but as these are one-time programmable chips, we got through a lot of them,” Hartmut explained. “The car runs great but the idle speed could be just a bit higher. Right now, it is set at the factory 750rpm, but with the overlap of the hotter cams we could do with another 150rpm on top to smoothen it out.”

The stock intake and exhaust on the M120 are incredibly restrictive and really strangle output. Hartmut explained that the M120 intake boxes and filters are disproportionately small, and that the engine really wakes up if you have space for bigger air boxes and larger diameter intake pipes.

“The stock intake boxes are just 350mm long and 120mm wide, which is ridiculously small for the stock six-litre V12, and the noise insulation foam inside each makes the space for the filter unit inside even smaller,” he explained. “On top of that, the intake trumpets are just 80mm high and 30mm wide, and make a 90-degree turn to reach the throttle body.”

RennTech did some engine bay space rationalisation so it could fit larger air boxes. This included relocating some air conditioning components and the suspension oil reservoir, and making a smaller coolant expansion tank. It was well worth the effort as the company’s bespoke larger air boxes and re-designed intake pipework liberated 30bhp!

Meanwhile the equal length headers add another 20bhp or so, while the big bore sports exhaust with 200-cell metal catalytic converters and custom-made resonators and rear silencers helps too. “The exhaust sounds really good as it is, but we are still working on achieving an even deeper note under full throttle,” said Hartmut. The final dyno numbers are 615bhp at 5,500rpm, underpinned by a whopping 703lb ft (952Nm) of torque between 4,250 and 4,500rpm, making this by far the most powerful naturally aspirated 140-series S-Class ever created.

To handle the massively increased output, the 722.6 five-speed automatic gearbox was beefed up using the tried-and-tested method of modifying the clutch packs to accept one or two more discs each. An OS Giken limited-slip differential was fitted for improved traction and handling, while the driveshafts reinforced with high performance tripod CV joints from Metalore in California are a standard RennTech upgrade following a couple of axle failures with 7.4s back in the day.

To help maintain optimum suspension geometry under acceleration, cornering and braking, uprated springs were matched to the stock dampers along with stiffer control arm bushes to take the slack out of the car’s chassis responses. The rubber mounts of the front and rear subframes were fitted with travel limiters to counter torque induced movement, and during the development phase the front subframe was modified to lower the motor slightly in the engine bay.

“At that stage, we thought we might need to make headroom for a single throttle intake system, but in end we achieved over 600hp using just our larger airboxes and intake pipework,” Hartmut explained.

Brakes have come a long way in the intervening years, and RennTech grafted on a set of 402mm and 360mm AMG carbon-ceramic brake discs with six-pot front calipers and four-pot calipers at the rear. Designed to stop the charge of the heavier W222 AMG S-Class, these brakes were fitted to the 140’s stub axles using one-off RennTech adaptor hats. One of the most impressive features of the S76R’s driving dynamics, these huge brakes sit snugly behind the 9.0Jx19 and 10.5Jx19 RennTech Classic Series three-piece forged wheels specifically made for the S76R and wrapped in 255/45ZR19 and 285/35ZR19 Michelins. Together with the 25mm lower ride height conferred by the sports springs, these big wheels and tyres give the car its purposeful stance.

A couple of items not initially planned for the car came along purely by chance. One of these was the AMG bodykit found online by one of the RennTech engineers working on the car. A 140-series enthusiast who owns two C140 coupes, a W140 saloon, and an R129 SL himself, he also found the individually reclining rear seats for the car on ebay.

The subtle front splitter and bootlid spoiler help to reduce lift at speed. Like the side panels with air extractors behind the wheels, they were 3D-printed in-house from ABS plastic. The only real upgrade in the plush fully retrimmed cabin is the audio system with modern speakers behind the factory grilles and the period-look head unit with up-to-date features like a USB input and Bluetooth.

While its sheer size and in-your-face presence was viewed negatively in the recession ridden early 1990s, it did not take many years after it was replaced by the 220-series for the 140 S-Class to be acknowledged as a high-water mark in Mercedes-Benz engineering prowess. Using a combination of period and modern design and engineering, the RennTech S76R is the ultimate expression of the 140-series S-Class. The car was delivered to its owner in early July 2022 and he is reportedly over the moon with it. We would like to think that he will enjoy its power and uniqueness for many years to come.

AMG cams originally made for the Zonda.

The engine is the heart of any car, and here RennTech has really done itself proud

Article type:
Translation
2023 renntech s76rmercedes-benzrenntechmercedesmercedes benzmercedes-benz w140
—
1257
Write a comment
No comments yet. Be the first to add a comment!