Having not had a Bentley in his life for some years, Richard McCann impulse-bought this 2005 Continental GT after just a quick spin… and remains highly delighted with his decision.

It was the most expensive bacon roll I have ever purchased. You see, on some Saturdays I would drift down to the Cotswolds base of my friend, Ian, a classic Ferrari dealer. I’d driven Ferraris as my daily transport during the 1980s, and raced them too, so we had common backgrounds. And if we were not interrupted by customers, Ian would dispatch his assistant to a nearby bakery for porcine-themed sustenance. This particular morning, I was paying; and while we were waiting for the orders to arrive, I surveyed the car park. “So, what are you driving right now, Ian?” I enquired. The transport of the moment turned out to be a Bentley Continental GT, taken in part-exchange. Full service history at Bentley, engine just removed for a pipework check as part of that famous £8500 thirty-something- thousand-mile service. 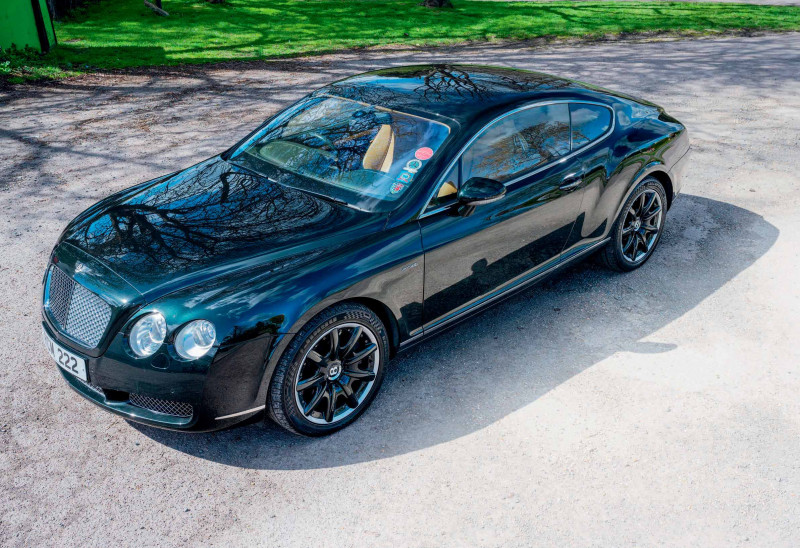 “You’ve had lots of Bentleys,” said Ian, suddenly throwing the key in my direction like David Gower aiming at a vulnerable wicket. “Tell me what you think.” Having nothing better to do, and never one to pass up the opportunity to burn a friend’s petrol, I walked up to the beautiful GT parked outside, the watery early morning sunlight revealing that what initially appeared to be black coachwork was in fact that gorgeous Midnight Emerald metallic green favoured by Her Majesty the Queen among others. Original is not always best, I admit. Show me any operation involving leeches, or a motor car on beadededge tyres, and I shall be the first to champion progress. But where car design is concerned, I sometimes wonder how a designer views attempts by marketing departments to ‘update’ a design using that tried-and-not-very-well- tested method of nailing on plenty of bling. Mona Lisa in a Pearly Queen dress and a tiara anyone? So, to my eyes, at least, the original Pires/van Braeckel-penned look of an early GT is so pure. 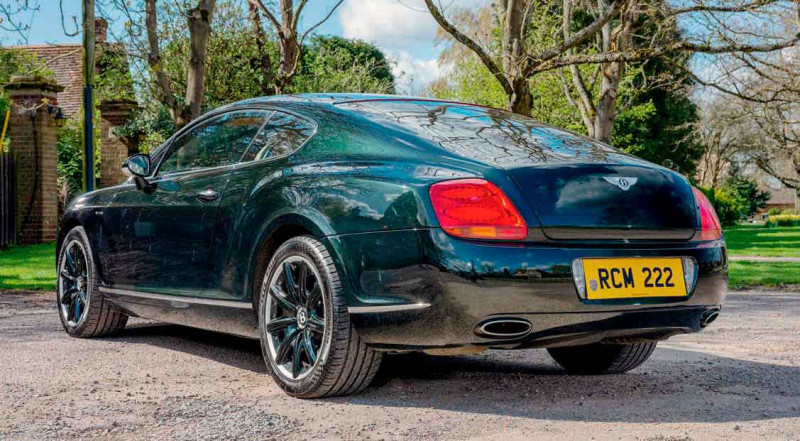 Inside, the original buyer of this 2005 car had specified all the interior trim options that had taken a few months after launch to come through, including two-tone Saffron and Laurel hide. As soon as the car unlocked upon my approach – sensing that I had the key in my pocket – and readied itself for ignition, I was in familiar territory. As a past team captain, I’d assisted with several launches over the years; I’d represented the factory at the Mille Miglia on five occasions, I’d set the class lap record at Silverstone and at Prescott, and had managed to take the coveted St John Horsfall Trophy to Crewe away from Aston Martin. And in turn, Bentley Motors had been good to me. I started my Bentley driving at the age of 25 with a MkVI special rebuilt for me by two fresh-faced young boys called Hillier and Hill, who had just returned from Bentley in Beverly Hills. I’d raced a Derby 3.5, a 3/4.5 (now with Jay Leno), a Speed 6 and an 8 Litre. Before that I’d grown up around my family’s Phantom, Silver Clouds and Silver Shadows, and via a Mulsanne I’d progressed in road cars to a lovely Continental R, Arnage, Azure, Continental W12, Continental V8 and Supersport. I’d been so fortunate to have been mentored into the Bentley Drivers Club by the legendary chairman Hugh Harben and A.F. Rivers-Fletcher, so I wasn’t a Bentley newbie or easily impressed. This borrowed GT did impress me, however, with its sheer all-round competence as I put it through its paces that wet Saturday morning. How had I managed to live these past four years without at least one Bentley in my life? 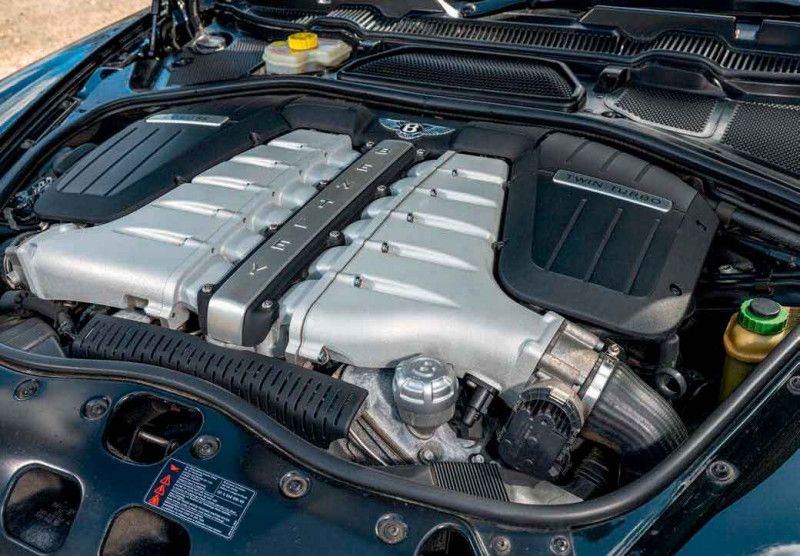 A strategy that up to that moment had seemed so sensible suddenly felt ridiculous. Why would anyone with the ability to drive a Bentley not do so? I returned to Ian. “Well?” he asked. “What’s not to like?” I responded.

Upon reflection, those words were not my best pre-purchase bargaining technique. “Is it for sale?” It was, of course, a silly question to ask any car dealer. No matter how much he loves his current ride, there’s always a sack of gold sufficiently large to make him part with the keys. And so it came to pass that a few days later I was driving through the Cotswolds with the nose of what was now ‘my’ W12 GT pointed homewards.

That first year was not as expensive an experience as I’d anticipated. Apart from servicing (at modest Audi prices via the Bentley specialists at Blackridge Automotive), repairs cost me £25 for a replacement tyre valve. I had suffered the anticipated teasing from friends interested to know which football club had signed me, but I took everything in good humour. I liked this motor car a lot. What other nonsense do I hear as a GT driver? Drivers of Mulsannes (no, let me correct that… people who own an old Mulsanne that they keep in the garage while they drive an anonymous euro-diesel hatchback every day) tell me that a GT is “not a proper Bentley”. It’s “just an Audi” or a “posh VW”. Well, peeling back the leather glued to the key fob of my last Aston Martin used to reveal a Volvo logo. Do people really believe that modern cars comprise 100% solus parts?One question I often hear is: “What’s the monthly on that?” (Correct answer: “Bentley drivers pay cash”.) Another is: “I bet that drinks fuel”. And while I actually see mid-20s to the gallon on a motorway commute, I generally reply: “One day I did get into double figures”, so as not to disappoint the interested party seeking confirmation of his prejudiced assumption.

While I’m pleased to report that – just as in the days of the Bentley T-series versus the Silver Shadow – most people don’t seem to know what a GT is, the footballer image can occasionally be useful. One evening I was driving home across the Midlands. I left a meeting in Cannock and was crossing Wolverhampton city centre. 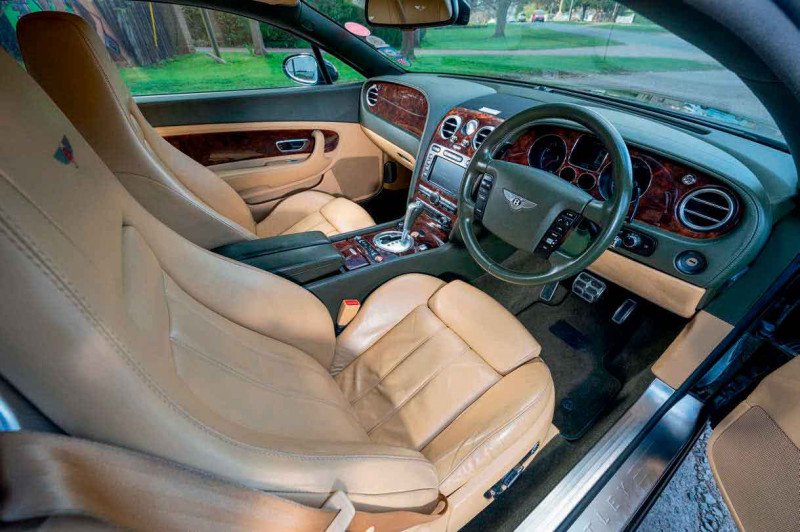 Traffic was crazily busy for a weekday early evening and it dawned on me that there was a big ‘Wolves’ game at The Molineux stadium. Suddenly, uniformed officials spotted the GT and gestured for me to leave the queue. Police officers stepped in and guided me down the centre of the road, past all the traffic right to the stadium. Who did they think was inside? A player? A manager or director? I confess that I did feel just a little sheepish as I declined the gestured left turn into the stadium and struck off straight ahead into the clear night towards home…

Next day I had a call from the Bentley Drivers Club. There was a race day at MIRA. Would I be interested in entering the GT? There were lots of W.O. and Derby cars attending but none of the new breed. I’d won my class the previous year in a sports car despite a lurid spin, so I knew the track. But how would this big, heavy coupé manage in proper timed track conditions? Would the GT be humiliated?

I can tell you now that a cruising – no matter how fast – on the public highway tells you less in two years about a motor car than two minutes on a track. And on track, the Continental is MIGHTY! A spectator congratulated me on my start line launch technique: “The others had loads of wheelspin and fishtailing but you just left the line as if you were fired from a gun.”

I freely confessed that my sole concession to racing was a switch to Sport mode. When the flag dropped, I simply moved my foot from the brake to the loud pedal and pushed. The wonderful Bentley did the rest.

I hung on and twiddled the wheel a bit. Ninety miles an hour in a drift never felt so under control as in the GT. I didn’t win my class that day but the GT did… on its own. Since then, the GT has gone about its business discretely and without any fuss. We’ve replaced a couple of rear calipers and those wires that guide the window in the passenger’s door. Plus a brake light. And that’s it.

Despite my familiarity with the GT, every journey still feels special. Oh yes, and to all the people who ask me if I miss the performance of the Speed model’s 202mph, I can honestly say that the 4mph shortfall in my GT’s mere 198mph maximum velocity has never seriously inconvenienced me. As I explained to the Comps Captain before I put my race suit and helmet in the boot ready to cruise home after my day at MIRA: “When I drove here, I liked the GT a lot. But now I’ve seen what it can really do, I love the car.”

“I’d suffered the teasing from friends interested to know which football club had signed me, but I took everything in good humour”

The W12 in Richard’s Bentley performs effortlessly on both road and track. After sixteen years of use, the GT’s interior remains in superb condition. Richard is clearly delighted with his latest Bentley.

With Volkswagen taking control of Bentley in 1998, the early years of the new millennium would inevitably see a new model line-up, a process that truly began via the headline-grabbing launch of the Continental GT at the 2003 Geneva Motor Show. It was the first Bentley with four-wheel drive and it was (in relative terms) something smaller, sportier and more affordable than Crewe had ever made before. The Continental GT marked the start of a whole new era and a complete break with Bentley tradition. There was obviously no connection with any previous Rolls-Royce, with the GT in fact owing more to the Volkswagen Phaeton in terms of its platform, transmission, adjustable air suspension and unusual W12 engine – which in Bentley form boasted twin turbochargers and an output of 552bhp. With four-wheel traction, the Continental GT could get to 60mph in under five seconds, with its top speed being somewhere near 200mph. Revisions in 2008 brought lightweight suspension and improved steering, with variable assistance for more ‘feel’, while the addition of the GT Speed meant more power and further-tweaked suspension. This was joined by the Supersports the following year, with over 600bhp, ceramic brakes and a rear-biased transmission – the fastest and most powerful car that Bentley had ever made.