Driving the 1989 Ferrari Testarossa Gerhard Berger used to own

Driving the car Gerhard Berger used to own.

I’ve pored over the Testarossa’s angular form at endless car shows, watched countless videos and read many more magazine articles on this most ’80s of Ferraris. It’s become so familiar that it’s hard not to feel blasé when my eye drifts over its form. Well, that is until I’ve closed the door and caught sight of its wide hips in the rear-view mirrors, and gazed upon the scarlet italicised font on the binnacles – I’m about to drive a bloody Testarossa! Even when the Testarossa was never my dream car – more on that later – it’s impossible to stop a frisson of excitement coursing through my veins. 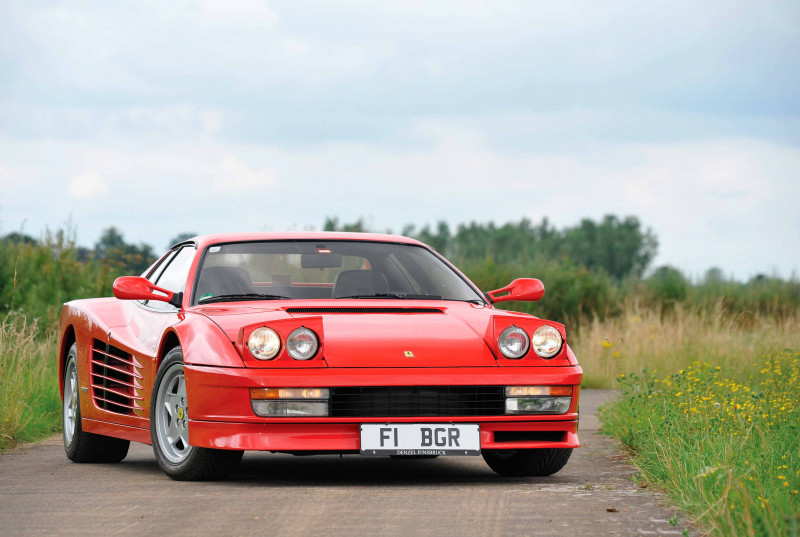 This isn’t just any Testarossa, either, because chassis number 80974 was originally given to Gerhard Berger by Ferrari as part of his F1 contract to drive for the Scuderia. Supplied by the Denzel dealership in Güssing, Austria and first registered on 19 May 1989, it was soon adorned with Berger’s personal plate – T.4798 – which had previously been used on his 328 GTS.The 1989 season saw a lot of firsts for the Scuderia, although sadly not too many firsts on track. Nigel Mansell joined the team and the new 640 featured not only the team’s first V12 engine since 1980 but also a semi-automatic gearbox. This was also the year of Berger’s horrific crash at the San Marino Grand Prix at Imola, when a broken front wing speared him into Tamburello corner at high speed. The car burst into flames and Berger was briefly knocked out, had minor burns and a couple of broken ribs. He suffered a run of 11 retirements until he took second at the Italian Grand Prix, an outright victory in Portugal, and another second place in Spain, earning him seventh place in the drivers’ standings. The following year Berger would lose his Ferrari F1 seat to Alain Prost, as he moved to McLaren alongside Ayrton Senna.

It wasn’t all grim news – 1989 would end on a high note for Berger with a company car upgrade from Testarossa to F40. He certainly enjoyed the former. On one occasion that’s mentioned in his memoirs, he was cruising at 270km/h (168mph) when a truck pulled out to overtake another car at 60km/h – avoiding the inevitable took all of his F1-honed skills. 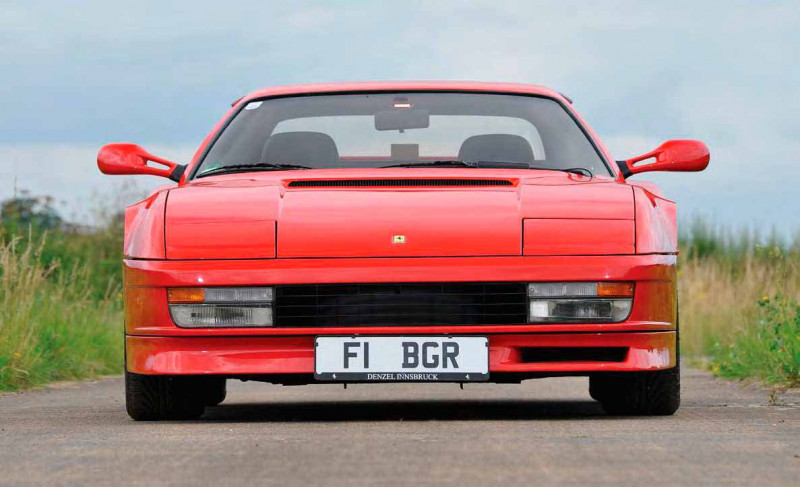 As I hover myself over the wide seat and shoehorn my oversized feet into the car – there’s a reason why F1 drivers tend to be on the short side – I’m hoping I won’t have my skills similarly tested. It’s cramped in here – my head’s forming an intimate relationship with the sun visor and my right knee’s covering the gearknob – so manipulating a typically belligerent cold Ferrari gearshift is proving even trickier than usual. Add in heavy unassisted steering for low-speed manoeuvring and my inner eight-year-old boy is chuckling away to himself.

That inner youngling’s mirth is because, so far, this Ferrari is living up to his expectations. The Testarossa is feeling more pose than poise, the automotive equivalent of Cameo’s ‘equipment package’ in the Word Up video. The Testarossa always seemed to me a car for people who liked saying they owned a Ferrari rather than actually driving it over 3000rpm. You’ve heard the adage about never meeting your heroes, but what about meeting your enemies?

The powers of persuasion, or to put it more accurately the persuasion of power, begins with the throbbing grumble emanating from just behind my head. The Tipo F113 is often referred to as a flat-12, but in reality it’s a V12 with a 180-degree vee. First introduced in the 365 GT4 BB in 1973, by the time the Testarossa whinnied into public consciousness in 1984, its 380hp output had made it the most powerful production car in the world. Of course, power is nothing without control, and this where the Testarossa has a tricky reputation. That enormous engine gives it a weight distribution of 40/60 front/rear and a reputation for on-limit handling woes.

Do you have to be Gerhard Berger to tame a Testarossa? No, not really. For what lies beneath is an exceptionally well-mannered GT car. The 255/50 ZR16 rear tyres do bring bump steer issues on B-roads, but such routes are not what this car was built for – and given its huge width, best avoided.

The key thing is compliance. This may be a car capable of cracking 60mph in a smidge over five seconds, with 100mph popping up less than seven seconds later, but the Testarossa doesn’t assault you for the privilege. There’s a lot of give in the wide sidewalls, and bumps are dismissed with ease, giving you more confidence to place the car on lumpier roads. Try wrangling more modern hypercars over such knobbly surfaces and your nerves will shred.

This compliance makes for truly useable power. No, not all of it, but certainly enough to get the adrenaline going, thanks largely to one of motoring’s finest orchestras. Yes, 380hp isn’t a great deal these days but in the Testarossa you feel each every one of those nags dragging you towards the horizon with a cacophony of 12-cylinder artistry. Punch the throttle into the floor and the response is immediate, the engine rousing from its refined burble into a gurgle, growing into a smooth, waspish howl as the rev needle catapults around the dial.

Torque impresses in equal measure. According to the stats, the peak is 361lb ft at 4500rpm, but you start to feel it from as little as 2000rpm, and it doesn’t really let up until the rev limiter at 6800rpm. It’s a truly flexible engine, this, perfect for the kind of outside-lane-of-the-autostrada blasts it was intended for. The notchy open-gate gearshift is less of a bugbear on such roads; there’s enough urge that you can simply leave it in fifth. Even the widest A-roads of Bedfordshire seem too small a playpen for this car; each prod of the throttle draws the next apex with the speed and smoothness of scissors through taut tracing paper, accompanied by loud, vivid tones.

At higher speeds the Testarossa becomes a coherent car. The steering lightens considerably but is still quick to respond; it’s not overwhelmingly feelsome but it’s clear and concise rather than verbose in its feedback. That’s what you want from a GT, after all – at 140mph, you don’t want each minor hand movement translated into a tree-climbing instruction. Quick, sweeping curves are a delight, with the Testarossa never feeling anything other than confidence-inspiring, while on mildly knottier corners there’s a dartiness to the front end that belies the car’s girth and weight.

Settle back down again and the quirks become more apparent. It’s hard to ignore the gawping, beeping and waving – and the swearing, spitting and frowning – from the general populace that goes along with driving a big red monument to 1980s excess. There are many who love the Testarossa’s visual assault, but I’m not one who covets attention. In a Testarossa, you have to get used to it.

It’s not all for show, however. Those dramatic side strakes do serve a purpose. This car’s predecessor, the 512 BB, was well known for cockpit temperatures as hot as its performance. For the Testarossa, Ferrari moved the radiators from the front end to behind the cockpit; hence the cooling side strakes. This was a controversial decision, as it was thought they wouldn’t pass US regulations; they were also intended to be much smaller. However, Pininfarina’s design team – Ian Cameron, Guido Campoli, Diego Ottina and Emanuele Nicosia, led by Leonardo Fioravanti – chose to make strakes a feature of the car and it became a much copied, but never bettered, design theme in the 1980s.

In this pre-Montezemolo era, interior ergonomics were seemingly given less attention than which grappa was going to accompany lunch. My arse is perched near the super-wide sill, my feet are somewhere near the centre of the car and my right knee’s hanging over first gear. As such, each roundabout represents an impromptu yoga class. Funnily enough, though, I find myself in forgiving mood the next time the road opens up.

This particular car’s own road has been rather more twisty – and tinged with tragedy. Berger owned the Testarossa for just one year, before he sold it to a friend in March 1990. He would only own it a year before it passed into the collection of a renowned Ferrari collector called Wimpissinger. Although well-maintained, it wouldn’t be much used – especially after a fire at Wimpissinger’s home. While the Testarossa was saved, his daughter wasn’t, and his grief led to the car being sold on in 1993. Sixteen years later, Oliver Robert Schlachter, an Italian car enthusiast and fan of Gerhard Berger, heard about the car (he had worked on the insurance file from the Wimpissinger fire) and after buying he used it sparingly, clocking up at most 200km. The car then passed to Thomas Zettl in 2014 and was then used as the official press car for the Mille Miglia and driven to both Maranello and Imola.

The current owners, John Marton and Martin Taylor, came across the car via a European classifieds site in February 2015. “It just said it was an ex-F1 driver’s car,” says Martin. “We decided to go to Augsburg to meet the owner, but it was snowing so badly we were diverted to another airport and had to be driven another 50 miles.”

A deal was soon done and the car was trailered back to the UK a month later. “Barkaways looked after the car for us,” says John. “The belts had already been done, so it was just a check-over, some new tyres, wheel bearings and seals, and a new horn, as well as changing the lights to UK specification.”

More work followed in 2017 – new spark plugs, fuel filters and a replacement vacuum pipe – but better was to follow. Gerhard Berger was coming to the UK to do some work with Bentley and agreed to meet John and Martin at Birmingham airport. Berger signed the dashboard and engine bay, as well his former race helmet and overalls that John and Martin had acquired to match the car.

This car has been used alongside another Testarossa that the pair own for events such as Salon Privé, Festival Italia at Brands Hatch and the Tour of Kent. Now it’s heading for auction with Historics, as the pair have an eye on something new. It’ll have to be something special to live up to this Testarossa with its genuine F1 history.

The Testarossa is a car that, once experienced, silences those who view it as more of a trinket than a driving tool. It may put the ‘grandiose’ into ‘grand tourer’, but it deserves to shout about its talents. In an era when today’s cars have fake exhaust tips and fake engine sounds, the Testarossa is a gloriously analogue experience, one that cuts through the image to deliver a truly engaging, addictive experience. There are faster, more amenable, better-handling Ferraris but there is only one Testarossa.

Thanks to John Marton and Martin Taylor, and Historics Auctioneers, where this car is due to be put up for sale soon.

Berger signed dashboard, engine bay, former race helmet and overalls for car’s current owners. Side strakes may look melodramatic but as ever at Ferrari, form follows function with cooling role. Gerhard Berger owned this example for just one year but loved driving it at up to 170mph on the autobahn.