Fusing the elegance of the W126 saloon with the dynamic aesthetic of its SEC stablemate, this periodperfect rarity is an example of 1980s AMG creativity at its finest

There’s something unusual going on here. You might have noticed. Looking at this car dead-on, it’s clearly an SEC… except, no, the proportions are slightly different. And moving round to the side, there’s a whole lot of extra real estate and far too many doors. What you’re looking at, in fact, is a period AMG conversion, taking the nose of the 126-series Coupe and painstakingly grafting it onto the statelier proportions of the 500SE Saloon. 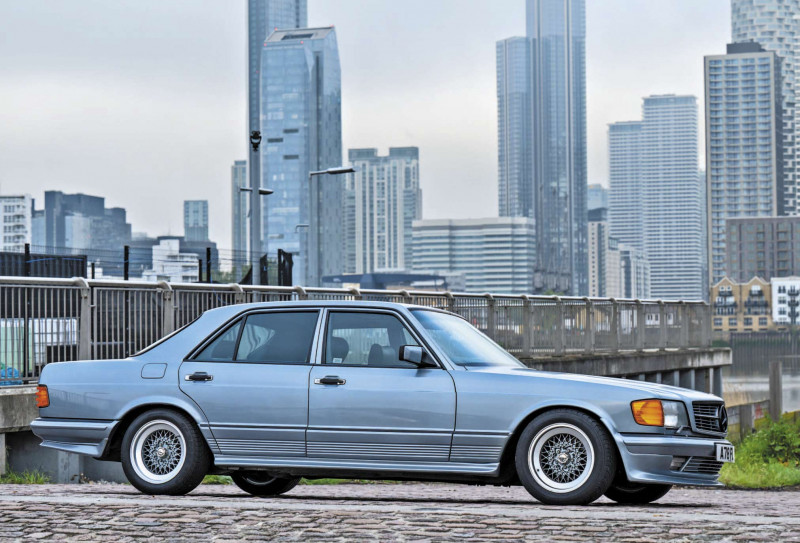 Before we get into the intricacies of it all, however, let’s take a look at the context from which this all sprung. It’s an oft-cited observation that the innovations which appear on the S-Class will filter down to their rival manufacturers’ offerings in a few years’ time; perhaps the most opulent and unashamed example of Mercedes’ premium approach is the 600 Grosser – a car designed for film stars, musicians, dictators and despots. Introduced in 1963, it was borne of the ambitious aim of creating ‘the best car in the world’, something which it arguably achieved with gusto. The entire car, vast and statesmanlike, was plumbed to operate on a hideously complicated system of hydraulics (suspension, windows, privacy shields, the works), because it was felt that this was the smoothest and least intrusive means of making things work: the kind of thing a modern businessman would appreciate: behind-the-scenes efficiency. Occupants of the leather-lined, walnut-encrusted, double-glazed interiors would be largely unaware of the rumbling of the substantial V8 up front, although the effect of the LSD might make itself known should they be pursued by paparazzi (or assassins, depending on the owner). And there’s the rub: Mercedes-Benz, in the upper echelons of the model range at least, stands for swollen luxury that goes hand-in-hand with outlandish thrust and great physical prowess. The proverbial iron fist/ velvet glove.

In the early 1980s, Stratton was appointed by AMG as the sole British distributor of the brand’s products 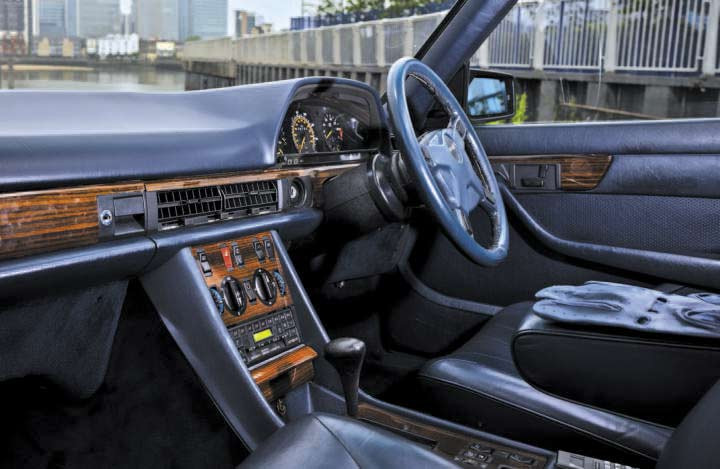 The 116-series S-Class proudly and bullishly elbowed its way through the fuel crisis, providing post-Grosser V8 limo luxury to the moneyed classes from 1972 through to 1980, and the demand for substantial, well-specced ultra-wagons with immense under-bonnet firepower showed no signs of abating as Mercedes-Benz developed the 126-generation S-Class. The 80s were a boom-time for pricey, flashy motors in the UK – the clichés of city boys in red braces and 930 Turbos rang true, although they didn’t all fancy widowmaker sports cars; those who wanted the proles to spy their Omega Seamasters as they cruised past had a posh new range of Mercedes Sonderklasse models to choose from. The W/V126 built on the luxurious reputation of its predecessor, bulked itself up as if it had been photocopied at 120 per cent, and set about showing the world how money talked.

An all-original example of an extremely rare Mercedes – it even still has the original Stratton keyring!

And it wasn’t just Britain that welcomed the model into the fold, of course. The US, Middle East and BRIC economies lapped it up, and this continues to be the case; while the kudos and cachet of having the latest and greatest S-Class is an enduring automotive constant among the caviar classes, you’d struggle to find an oil sheikh or Texan tycoon who didn’t also have a cherished 126 in his collection, proudly wearing the gentle patina of several decades of fat-cattery polishing a sheen onto the leather of its cigar-infused interior. 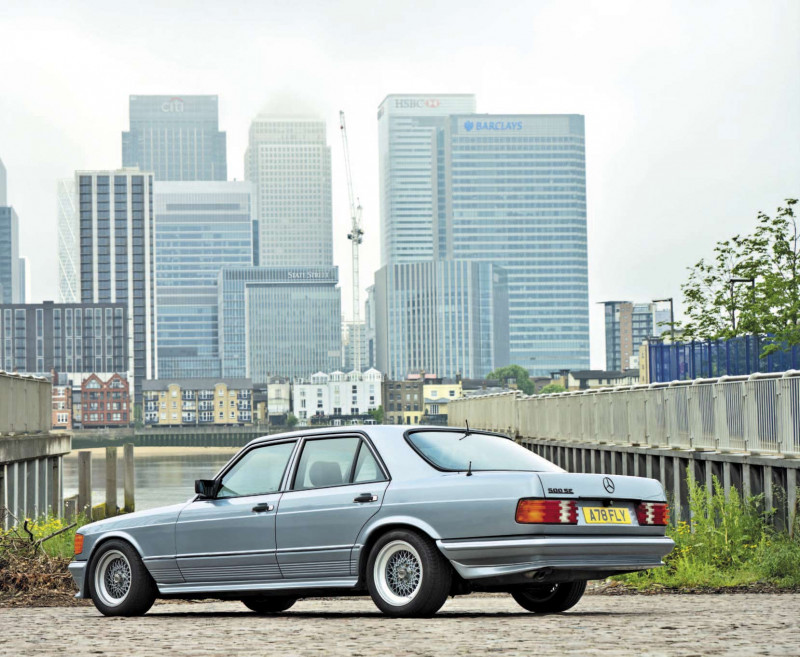 Another interesting point to consider is the involvement of AMG in these swanky luxo-barges. The development and launch of the 126-series Saloon all occurred some time before Mercedes-Benz (or rather, DaimlerChrysler) took a controlling interest in AMG in 1990; before that, AMG Motorenbau und Entwicklungsgesellschaft mbH had operated as its own independent entity – an engineering firm specialising in tuning Mercedes-Benz products, although it did dabble in other brands too (AMG Mitsubishi Galant, anyone?).

The first commercially available, official AMG Mercedes was the C36 in 1993. So, unlike today, when it’s possible to walk into a Mercedes-Benz showroom and choose from a variety of official AMG models, it was more the case that an AMG 126 was a bespoke affair, looked on kindly by M-B but by no means officially sanctioned. They were hugely popular though, with AMG offering tuning options and bodykits for all 126s – Saloons, Coupes, even LWB limos – as well as an ostentatious widebody kit for the coupe. And inevitably there was its celebrated six-litre DOHC V8, to whet the appetites of the high net worth speed freaks.

All of this found itself working on an exemplary platform. What was the 126 Saloon all about? Well, Bruno Sacco’s design was smart and progressive; while we’ve been giving you the impression that the S-Class was overtly about brash opulence and hang the consequences, it was in fact a guiding principle of 126 development to integrate the ‘Energy Concept’: lightweight materials and countless hours in the wind tunnel made the car as frugal as it could possibly be. An improved ride and superior handling were also key principles, and a bafflingly broad array of engine options helped in Mercedes’ aim to retain the ‘world’s best-selling prestige luxury sedan’ title while also appealing to a more diverse audience.

If you’ve ever been in a W126 taxi, your buttocks undoubtedly shimmied to the rhythm of the straight-five three-litre diesel, while petrol variants ranged from 2.6- to three-litre in straight-six form, with V8s starting at 3.8-litres and swelling to a girthsome 5.6. An everyman luxury car? Well, kind of. In terms of body style, it was available in standard four-door saloon guise (SE/SD), long-wheelbase (SEL/ SDL) and two-door coupe (SEC) variants, all featuring that vast in-your-face grille that looks magnificently like some kind of chromed breadbin. And with all of these ingredients coalescing, we arrive at Stratton of Wilmslow.

Situated on Water Lane, this specialist dealership has become inextricably intertwined with the AMG name among old-school UK-based aficionados. In the early 1980s, Stratton was appointed by AMG as the sole British distributor of the brand’s products – and it wasn’t just a case of shipping over AMG Mercs and flogging them to well-heeled clients, the company was fully trusted to build its own examples under licence, and that’s what you’re seeing here. The car before Jason Dodd’s lens today is a genuine AMG 500SE, built by Stratton of Wilmslow and supplied to its first discerning owner in 1984.

The SE’s current owner is a serial Mercedes-Benz collector, enthusiast and marque cheerleader by the name of Shyam Bhundia. He’s had an impressive variety of retro Mercs over the years, many of them with ‘500’ on the bootlid, and he knows whereof he speaks. “I’ve always been fascinated by 1980s and 90s Mercedes, and enjoyed going to motor shows as a child,” he says. “I bought my first classic in 2016, a 1984 500SEC AMG; this was a project car. Since then, I’ve progressed to owning a few more, as well as co-running an Instagram page dedicated to classic German cars: @Deutsche_Classics.”

So how did Shyam come to own this extraordinarily rare and original curio? As with so many stories these days, it’s thanks to the guiding hand of social media. “I saw a post on Facebook by the previous owner’s son-in-law, asking advice on identifying the car due to its SEC front,” he explains.

“I started a conversation with him and learned that the car had been in the family from new since 1984; it was ordered brand new with the rare AMG kit from Stratton in Cheshire. The original owner passed away in 2015 and the car had been stored in a garage since then. After a few weeks of chatting, and a trip to Leeds (where the car was kept) from London, we agreed a sale.”

It really was too good an opportunity to pass up: an all-original example of an extremely rare Mercedes, in superb condition inside and out – it even still has the original Stratton keyring! The specs are really intriguing too; the full-fat 500SE was treated to the full AMG kit, comprising bumpers, skirts and spoilers, along with the 16-inch BBS Mahle wheels and AMG Atiwe steering wheel.

Of course, the most notable change is the SEC nose job – this was a far more complex undertaking than you might imagine, as it wasn’t just a simple bonnet swap. The markedly different proportions and profiles of the two models meant that the conversion required Stratton to fit new outer and inner wings and a different cooler surround too. An in-depth task to carry out on a brand new car fresh from the production line, for sure! Shyam is the car’s second owner, and he’s only aware of one or two other SEC-fronted Stratton AMG 500SEs in the country, making this car one of the rarest machines to feature in these pages. “I’ve owned it for around a year,” he says, “and in my ownership I’ve done a full service, some suspension work, and overhauled the fuel delivery system. There was an issue whereby the car would lose power, and after investigation I found that the fuel tank had rusted from the inside, which was causing fuel starvation. So a replacement tank was fitted, along with a new pump, filter, tank strainer and hoses. The car came with its original black rubber overmats and I’ve sourced a genuine set of blue ribbed ones.”

He’s a man with an eye for correctness and detail, and Shyam is keen to take a light touch here to ensure originality and usability without altering or modifying this obscure curiosity. Future plans are to give the suspension a little further attention and finesse the bodywork, but on the whole just to enjoy the car as the piece of automotive art that it is, as well as using it as its original makers intended.

Such is the SE’s unusualness that it was featured in the April 1984 issue of Gran Turismo magazine, back when it was all shiny and new, and it’s just as much of a head-turner today. “People are fascinated by the car,” Shyam says, and we can well believe it. Any 126 Saloon is special, and a 500 all the more so. An AMG 500 is approaching holy grail status, but this? This really is something else. A period-perfect example of unfettered AMG creativity.

All figures from Mercedes-Benz for a standard 1984 500SE on which this car is based; fuel consumption according to EEC urban

Original Stratton keyring a great detail! Just under 110,000 miles on the odometer. This 500SE is equipped with an AMG Atiwe wheel.

What you’re looking at is a period AMG conversion