The start of something Mercedes-Benz dealerships, it was also the first Mercedes to

The C36 AMG is one of the most elusive models of the 1990s. Despite being the first AMG officially sold in Mercedes-Benz showrooms, this 202-series C-Class is not widely recognised – and with good reason. Just 5,221 units were made. Available only as a four-door saloon from 1993 to 1997, it was superseded by the more abundant C43 and the ultra-rare C55 V8 Saloons and Estates.

The 124-series E36 Saloon, Estate, Coupe and Cabriolet launched around the same time as the C36 are equipped with the same straight-six engine and suffered a similar fate: produced in very limited numbers, they never quite received the same level of attention (or affection) that eight-cylinder cars from both Stuttgart and Affalterbach enjoy to this day.

The W202 C-Class picked up where the W201 190 left off, offering more interior space and comfort, increased refinement from the driveline, improved safety and more choice in the form of a much broader range that included an Estate version. Despite these advancements, though, it’s the W201 that is the more sought-after generation today. Although the C36 proves there is hope yet for the first Mercedes designated ‘C-Class’.

This Lapis Blue metallic example belongs to Sam Parmar, who lives in Surrey. Inspiration to own a C36 AMG came from seeing the F1 Safety Car version in 1996. After that first sighting, Sam promised himself that someday he would have his own. That day arrived in 2011, although it wasn’t a straightforward journey. A number of examples that Sam spotted for sale online did not make the grade, and an example he travelled many miles north to see turned out to be so rusty and scruffy that he didn’t even bother getting out of his car to check it up closely.

After that episode, Sam found this 1996 example with 105,000 miles on the clock. It is believed to be just one of two C36 AMGs in this colour in the UK. When brand new, the car was used occasionally by its first keeper, however after just three months on the road a roof tile fell onto the bonnet in a storm, smashing a headlamp in the process. The car was then stored for 10 years, during which time it was occasionally exercised, until April 2021 when the part-restoration could finally take place.

That work has taken much time and effort. Thanks to Lee and Ron at Vanleigh Coachworks in Surrey, this W202 C-Class’s wheelarches, bootlid and bootlid lock are now completely rust-free, and you can’t spot where the roof tile landed, so good is the repair work. To make the C36 drive and handle as good as it looks, Sam’s local mechanic Nathan carried out a full renewal of the AMG suspension down to the subframe, fitting Powerflex bushes and even rebuilding the differential. As well as servicing the C36 Saloon, Nathan fixed a tricky crankshaft sensor oil leak, and will change the fluids every year going forwards, regardless of mileage.

So, this performance saloon has been given a new lease of life and is surely among the finest W202s in the country. Its low stance on AMG monoblocks suggests real purpose and contributes to an undeniably sporty, powerful demeanour. The C36 has a lot of presence and looks far more purposeful than a six-cylinder R129 SL with small alloys, for example. And so it should, given that AMG-tuned, 3.6-litre straight-six engine under the bonnet, which is linked to an original, stainless steel AMG exhaust. 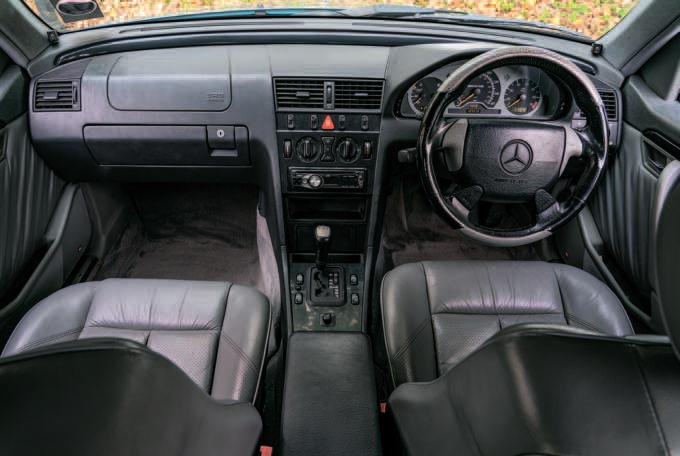 According to Sam, the C36 is a proper driver’s car. “It can get a little wayward, which always puts a smile on my face. With new cars, you just get in and they basically drive you, whereas the C36 demands to be driven.” Hardly a soft alternative to the V8, then. The C36’s brake discs measure 288mm up front and 278mm at the rear, and Sam finds that they “bite very hard, and on demand.” The four-speed automatic transmission (a 722.4 unit) is bulletproof – even more so than the five-speed auto installed on cars built from August 1996. After a gearbox service, Sam says that it was transformed from being simply a decent gearbox to a silky smooth one with almost imperceptible shifts. And with that more aggressive AMG styling than the succeeding C43, this all does make you wonder why the eight-cylinders have hogged so much of the limelight.

There is much else to the C36’s styling that appeals too, including the chrome accents along the flanks, the rear AMG spoiler and the twin-pipe exhaust system whose square-cut tips stand proud of the bumper and let loose a wonderful six-cylinder yowl under acceleration. Next up in terms of work on the car is the headlining, which has suffered from some years of being in storage. The overmats are factory original ribbed texture and need to be protected, so an extra set is on the way. After a few more minor bodywork blemishes are tidied, the paintwork will be flawless.

This car has a very early example of Mercedes’ infrared key and that will soon be refurbished rather than replaced, as new ones are no longer available from Mercedes-Benz. Finding AMG parts from this period can be difficult too, although Sam is lucky because his C36 wanted for very little when he bought it; that rear spoiler isn’t available to buy new from Mercedes either, and when they do come up for sale second hand, they’re not exactly cheap. 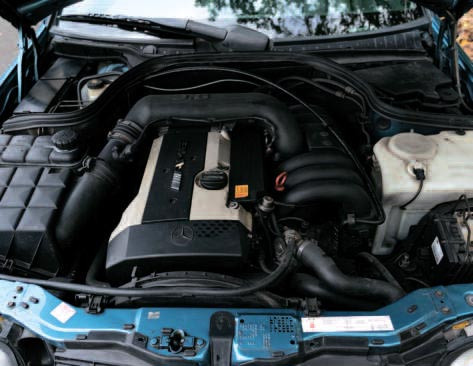 The (non-standard) 18-inch AMG alloys have been nicely refurbished by Sam himself – another example of his raw enthusiasm for the car. When he purchased this C36, the wheels were painted and in need of restoration. After working his way through various grades of sandpaper and finishing off the wheels with aluminium polish, they were returned to their former glory and complemented new, low-profile tyres perfectly.

All of this work has resulted in a great looking and solid feeling car which, although perhaps not quite matching the robustness of a 124 E-Class, 140 S-Class or 129 SL, delivers an exciting and rewarding drive nonetheless. The plush, grey leather seat upholstery and two-tone AMG steering wheel certainly contribute to the C36’s overall sense of sophistication and take the last edge off what is otherwise a raw and engaging 1990s saloon.

Not just one of the nicest C36 AMGs around, this example should make those who have previously written off the 202-series C-Class sit up and take note. There’s real classic potential here and the C36 offers affordable entry to early AMG experiences. How often can we say that?

This C36 takes pride of place in Sam’s household at the head of the fleet and is rolled out only on special occasions. It shares space with a BMW now retired into storage, plus a W202 C180 project car bought for just £680 and now fitted with familiar AMG monoblock alloys. With this AMG saloon all but complete, Sam is considering adding a W201 190 to his collection. As a predecessor of his 202-series C-Classes, we think it would make a great choice.

All figures from Mercedes-Benz for an early 1996 car as pictured; fuel consumption according to EEC urban

Sold before AMG officially became part of Mercedes- Benz, C36 AMGs hail from the tuner’s bygone era – but what are they worth now?

At the time of writing, a handful of C36 AMGs were offered for sale in the UK. Manufactured in 1995 and now with 67,000 miles on the clock, the first example we found was advertised online by its private seller in London for £49,999 due to its ‘one-off’ nature and stack of options including three-piece AMG alloys, Azurite Blue paint and two-tone black/blue interior. The second C36, a 1994 car with 169,000 miles and living in Manchester with its private owner, was priced at £5,750 to reflect its condition. It did have a fresh MOT and service history, though.

I am the proud owner of the other only C36 in this colour :)