The 2200 Spider represented the ambitions of Abarth and patron Fiat to strike at the higher order of Italian motoring, but it was destined to remain a rarity.

ON A SOFTER NOTE

WHAT’S IN A NAME?

We appear to be driving at the pace of a funeral cortège, but then we don’t want to scare the locals, do we? The New Fores t offers a seemingly never-ending but ever-changing backdrop, not forgetting the requisite ponies that roam where they please with unhurried intent. It is hauntingly beautiful, the landscape teasing us, perhaps even goading. It’s late winter and neardeserted save the hoofed herbivores, and we are in an Abarth with all that entails. This day will end with wide eyes, even broader smiles, and tested reflexes. Or a stampede. One of the two. 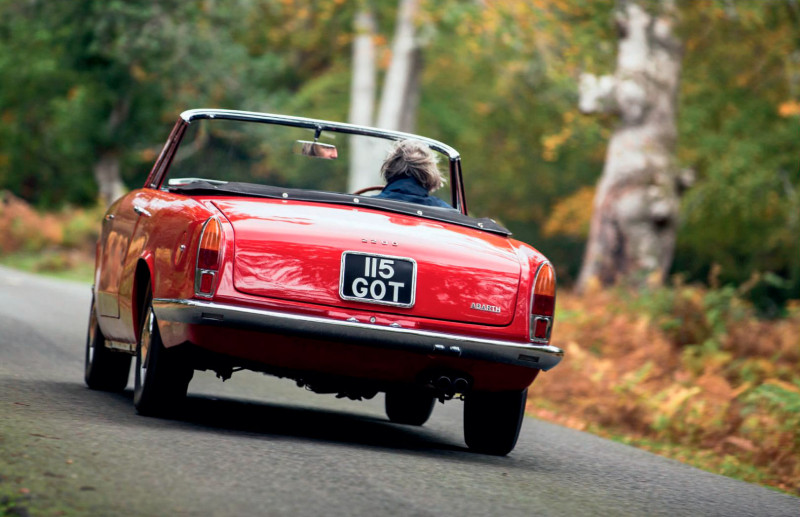 But no. This is not your usual classic Abarth, should such a thing exist. Forget shrill sportsracers or Fiats pop-pop-popping and banging their way to valve bounce, the 2200 Spider is that bit more… refined. It is nothing like what you might picture an Abarth to be in your mind’s eye, not least because it is powered by a straight-six rather than a peaky four-banger. What’s more, it’s mounted in the front. As such, this handsome convertible has a certain enigmatic air that only heightens its obvious attraction.

‘The Abarth badge here is befitting: the 2200 feels special, much more than just a gussied-up Fiat. It is, well, lovely’ 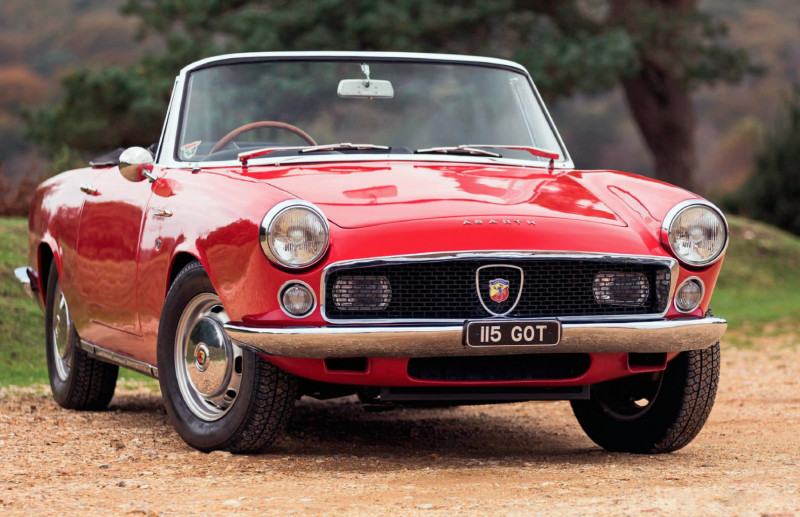 Posterity pays scant attention to this subspecies of Abarth, but it should. The 2200 and its siblings represented a period when the marque of the scorpion attempted to take on the exotic elite. This move was quite the leap, but then company founder Carlo Abarth (né Karl) always was a big-picture man, and a defiantly self-directed one at that. He had already succeeded in so many other spheres, and in relatively short order, so making ‘big’ cars should have presented just another stepping stone in his well-crafted and carefully nurtured narrative. 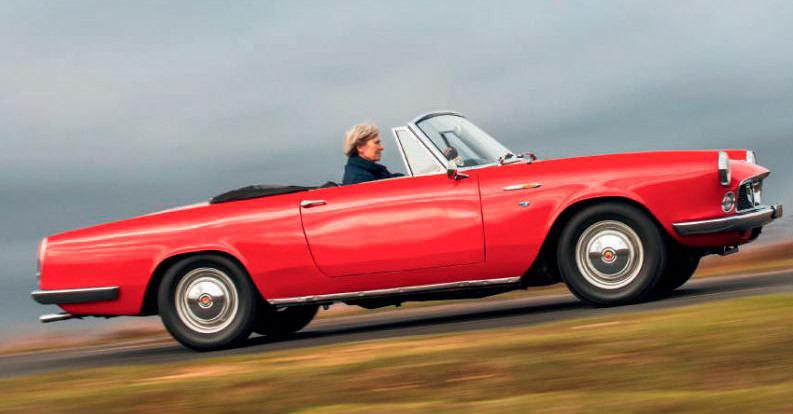 Born in Vienna in November 1908, Abarth earned a degree of fame for his two-wheeled exploits prior to the outbreak of the Second World War. Reminted as an Italian citizen at the end of hostilities, he became embroiled in Piero Dusio’s Cisitalia Grand Prix car project, one that unspooled before it ever had the chance to compete (although the Ferdinand Porschedesigned single-seater did establish speed records in Argentina). Abarth went it alone in 1949, initially fielding Cisitalias under his own name while producing tuning equipment that brought in much needed lire. 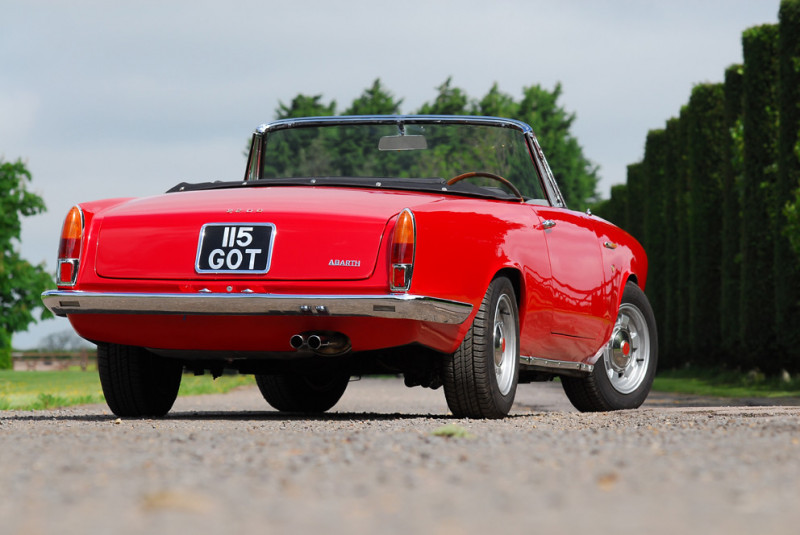 A man who from most accounts rarely sought counsel, the bootstrap entrepreneur was blessed with a genius for sales and marketing. There were plenty of rival go-faster outfits, but none enjoyed similar levels of exposure. ‘The Sorcerer’ employed numerous well-known journalists as works drivers, and basked in the reflective glow of positive ink. Abarth & C cameinto its own in 1958, after Carlo signed a deal with Fiat whereby his firm would receive a bonus payment for each race win. The Turin giant must have shelled out a lot, because Abarth allegedly accrued more than 7300 overall or class victories in the years up to 1971.

Within a decade, Abarth was the de facto king of the domestic aftermarket: his sports-racers owned several small-displacement classes trackside, while his small-series road cars were clothed by the cream of Latin coachbuilders. He then sought acceptance as a manufacturer of aspirational products and thus headed into virgin territory. The first of this new breed of Abarth – the rather blandly named 1600 – was launched at the 1959 Turin motor show. It comprised a Fiat 1500 platform and an engine based on a 1.5-litre, twin-cam, Fiat-made Osca ‘four’.

Variations on the theme were offered in open and closed forms, with outlines penned by Giovanni Michelotti and crafted by Carrozzeria Allemano (a 2+2 version followed, some of which were bodied by Carrozzeria Ellena). Altogether more absorbing, however, was its other debutant, the 2200. The home market for cars with large-displacement engines had historically been considerably limited, there being a massive tax hike on anything with a capac of greater than o litres. Nevertheless, Alfa Romeo had enjoyed some success with the 1900 and would soon launch the 2000, while Lancia shared similar prosperity with the Flaminia range. Fiat, by then Abarth’s patron and protector, had also entered the fray with its sober-looking 1800/2100 saloons.

The outwardly uninspiring 2100 provided the foundations for the new range-topper. By increasing the bore from 77 to 79mm, Abarth’s cabal of demon tweakers hiked the straight-six’s displacement from 2054 to 2162cc. They also raised the compression ratio from 7.8:1 to 9.5:1, added bigger pistons, three triple-choke Weber 40 DCOE sidedraught carbs, a large-capacity oil sump and, naturally, a new exhaust system. If the factory’s figures are to be believed, these modifications served to increase power output from 82 to 135bhp at 6000rpm.

Around 200mm was removed from the donor saloon’s wheelbase and refinements included an Abarth floor-mounted gearchange, a higher final-drive ratio, uprated dampers and Dunlop disc brakes all-round. Just as night follows day, Michelotti was brought in to style the new variant. Inevitably, the pretty new 2+2 coupé looked a mite similar to other cars shaped by this ubiquitous pen-for-hire. The Spider variant, in contrast, was not quite so happy-looking: a slanted quad-headlight arrangement initially lent it a pronounced squint, but was rapidly changed for a more conventional twin-headlight set-up that worked wonders.

Once again, the favoured coachbuilder was Serafino Allemano. His eponymous carrozzeria might not be fêted today, but it was prolific way back when. Starting out in 1929 performing general repair work, it hit its stride during the 1950s thanks in no small part to the input of the boss’s nephew, Mario Allemano. The Torinese couturier made umpteen variations of Fiat 500- and 600-based Abarths, but is perhaps remembered most for crafting bodies for 22 of the 32 Maserati 5000GTs made, and also for clothing the ill-starred ATS 2500GT supercar prior to that company’s collapse in 1965. The thing is, the 2200 didn’t sell in anything like high volumes, and production was of the stop-start variety. Abarth introduced a revised version at the 1961 Geneva motor show, with styling tweaks courtesy of Ezio Ellena, but there was no great reversal of fortune. The model was dropped at the end of year as the new 2400 came online. Riffing heavily on the Fiat 2300, this latest new strain boasted a 142bhp, 2323cc ‘six’ but also failed to hit the ground running. A latein- the-day remodel by Allemano achieved little, nor did subsequent styling tweaks, and Abarth’s flirtation with making ‘big’ cars was over by ’64.

No amount of sugar-coating could disguise the fact that the move hadn’t been a success. So why did the Abarth ‘sixes’ fail to find favour? It all rather depends on whose estimates you credit. Given Carlo Abarth’s brilliance for promotion, whether personally or professionally, it is odd that the six-cylinder models weren’t marketed more forcefully. On the flipside, you have to consider just how many projects were on the go within the Corso Marche factory.

Aspirational projects or not, road cars always were a means to an end. Carlo Abarth was a racing man to the core, and everything revolved around his competition activities. Given that his wares were participating in various disciplines, before you factor in the production of heartland fare, something had to give. This was it.

You could also argue that the arrival of Fiat’s own-brand 2300S Coupé contributed.

Somehow, you doubt the Turin giant desired competition for the handsome, Ghia-shaped range-topper from a firm it was supporting. The 2200 didn’t represent fantastic value in overseas territories, either. Only three cars were ever made in right-hand drive: a brace of coupés, one of which was destroyed in the 1960s, and the Spider pictured here. Each was sold via the UK concessionaire, Anthony Crook Motors. By the time purchase and import taxes were taken into account, prices started from £4076. That was more than an Aston Martin DB4.

As for the vexed question of production figures, it is impossible to pin down a precise number. The consensus among marque historians seems to be no more than 30 of all types. ‘Our’ car was sold new to motor trader Robert J Goodfellow and initially registered WOT 1. In 1963 it acquired its current number, 115 GOT, after ownership passed to well-known man-about-town Sir William Piggott-Brown. How long the sporting baronet retained the car is a mystery, the 2200 being purchased in careworn condition by Roberto Giordanelli in the ’80s. The racer/journalist set about restoring the rare Abarth, the task finally being completed by its subsequent keeper, Steve Smith.

The Spider was bought by its present custodians, Sara and Bill Billett, in 2006. They have since rendered the Abarth period-correct, substituting narrow steel wheels (with chrome hubcaps) in place of the Fiat 130 alloys that were on the car when purchased. The Spider has been garlanded in concours events, but it is eve inch a driver. It gets used, and it shows.

What photos don’t lend is a sense of scale: this might be big by Abarth standards, but it appears positively dainty beside modern cars. It is also pretty, as is to be expected, but free from the sort of styling tinsel familiar to the period. There’s little in the way of chrome adornment.

Step aboard and the body-coloured fascia is fronted by a vast Nardi wheel. The detailing is exquisite, not least the groovy arrow-shaped indicator flashers (they’re Fiat items). Then there are the Bakelite controls and the glitzy radio. The Jaeger speedometer’s top reading of 170mph is a touch fanciful, though. Flanking it is a rev counter that reads to 7000rpm, with smaller gauges clustered around them. You sit perched atop the leather-clad (originally vinyl) seat, with the pedals sprouting out of the floor and the willowy gearlever ideally sited.

Given Abarth’s bread-and-butter activities centred around exhaust systems, it shouldn’t come as too great a surprise that the 2200 Spider sounds the part. The engine is rooted in a mainstream unit but, when pressed, it emits a thoroughbred growl overlaid with induction roar. It is the antithesis of your typical Abarth in that it isn’t the least bit hurried. The straight-six is reasonably torquey (there’s 130lb ft of the good stuff at 3800rpm if the brochure is to be believed), and it weighs 1090kg (2403lb) so there’s relatively little heft. As such, it picks up momentum with minimal drama.

According to the factory figures, the Spider was capable of 0-60mph in 9 secs, going on to 123mph outright. That seems a little hopeful, but it is certainly brisk. The gearchange is an unanticipated delight, too. It is well defined between planes, with a relatively short throw across the gate and it snicks into each ratio remarkably quickly. This is the biggest surprise here, given the car’s vintage. The worm-and-roller steering arrangement, in contrast, is very much of its era, but free from kickback or dead spots nonetheless. Nor are there any tremors through the structure, which is not always a given with something coachbuilt in the ’60s. This is patently not a car for tes switchbacks, but the Spider is in its element on flowing B-roads. You expect it to be a bit ponderous, given its less-than-racy underpinnings, but instead the Abarth is relaxed and predictable.

The twin-coil-sprung live rear end absorbs the worst topographical nastiness on the straight-ahead, and it doesn’t get discombobulated should you encounter a bump mid-corner, either. The brakes work well, even if the pedal requires a hefty shove. The Abarth badge here is befitting: the 2200 feels special.

What this car has in spades is charm. It is much more than just a gussied-up Fiat, a reconfigured and beautified production car with some go-quicker bits chucked in. It is, well, lovely. Yes, the 2200 didn’t make much of an impression in period, and as such it will always be a footnote in Abarth lore, but that’s the thing: it is a winner on its own terms. The 2200 Spider is infinitely better than the sum of its parts, so it’s all the more of a shame, then, that it didn’t get to captivate a wider audience.