For reader Peter Rogers the perfect car CV has to include a distinctive cruiser that’s also a canny buy. Will a day driving the 1996 Bentley Continental R provide a perfect match?

Even here the Continental R stands out.’ We’re walking around Ranmore Service and Engineering Ltd but Peter Andrews keeps coming back to the 1996 coupé. Its decadent Arnage T descendent can’t hold his attention for long. Nor can the Rolls-Royce Corniche and Bentley S2 Continental that form a family tree of the two-door tourer. Peter placed the modern classic in his perfect ten for its luxury and remarkably low values. Today he’ll slide behind the wheel to discover if it has the makings of a future icon – and whether the Bentley can keep its spot in his dream garage. 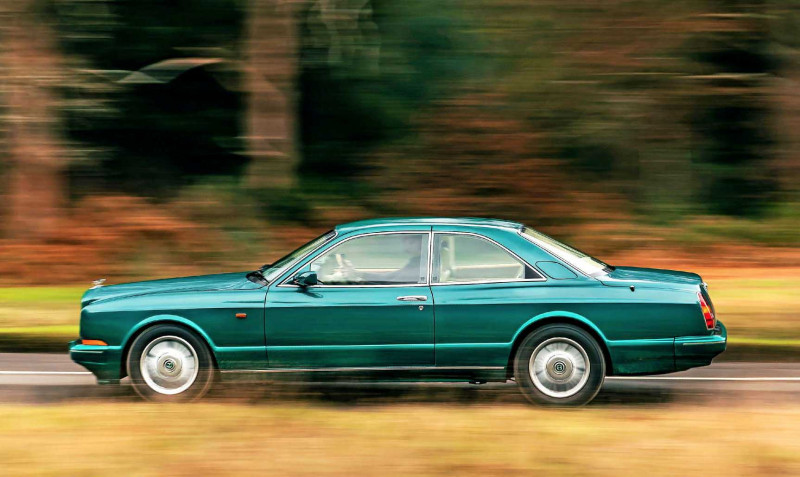 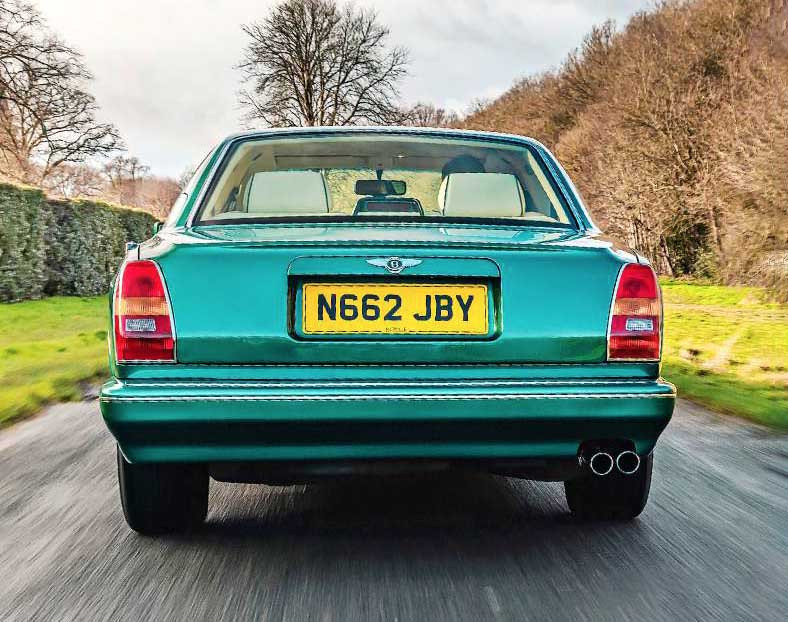 ‘I chose the Continental R as part of a collection, just like the rest of my list. Some of the other cars fill the roles of established classics and sports cars. It’s a machine only Rolls-Royce or Bentley could make and one I’d use solely on long journeys that match its talents.’ The 2.4-tonne behemoth is a change of pace for Peter. Sports cars stud his driving history, ranging from a Ferrari F355 Spyder to his current TVR Griffith 4.3. ‘I’ll always be a petrolhead but I have a young family now and four seats allow us to go out together. The Bentley would definitely have its role.’

Company consultant Paul Brightman – who founded the specialist in its previous guise as Royce Service & Engineering – has plenty of experience using the model exactly as its makers intended. ‘I’ve driven it out to Bordeaux and back for its hotelier current owner, and it’s such a different place to be. The Continental wafts and the handbuilt cockpit is like nothing else. It’s behind the times, compared to a BMW or a Mercedes-Benz, but we’re meeting buyers who want to step back from modern cars and discover what the top of the range used to be.’ 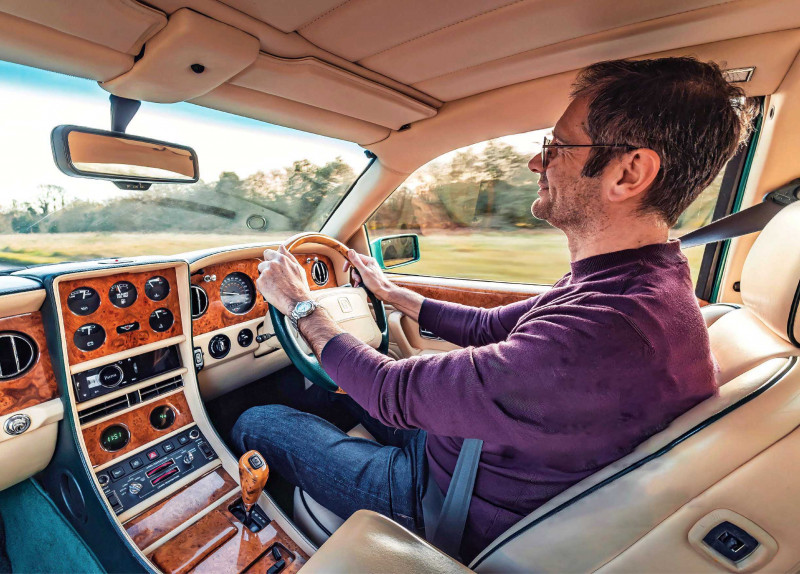 ‘The colour is striking,’ Peter continues. ‘It’s very tasteful and suits the clean yet elegant lines of the styling perfectly, while matching the Magnolia upholstery.’ Paul concurs as he explains the history of the special-order shade. ‘The CEO of Rolex was buying a Bentley but wanted it to match the emerald finish of a watch he then produced. It looked so good that it was added to the range.’ He passes over the keys with a final word about technical specification. ‘The Continental range was overhauled for 1996 with a tilting steering column, Zytek engine management and a liquid-cooled chargecooler. Power is up from 325bhp to 385bhp but it’s still all about the wafting.’

The Surrey Hills beckon. Climbing up into the hide-covered cabin, we take a moment to electronically adjust the seats and acclimatise to the regal driving position. ‘There’s no footwell,’ Peter remarks. ‘The floor is entirely level with the sill, which forces me to step up into the cabin. I need to get the seat all the way back to find a practical driving position but, now that I have, I’m feeling incredibly comfortable.’

The height of the seat provides another shock. ‘The length of the body makes the cabin look quite low from outside, yet I’m actually up high and looking down over the road. Perhaps that’s what a Bentley customer would expect. I’ve got excellent forward visibility.’ A commodious glasshouse and crisp corners make a strong first impression as we swing away from the Betchworth workshops and onto busy semi-urban roads. ‘The square bonnet makes it easy to see the car’s edges and the Flying B emblem marks the extremities beautifully. I love it as a visual feature as well. It balances with the painted radiator grille.

‘Driving feels so easy that it borders on effortless. The controls are set up like any ordinary car and the automatic transmission is helping, because I don’t have to think about shifting or managing an unfamiliar clutch. Add the light, precise steering and the Conti is already a relaxing car to drive.’ Or it is until Peter has to grapple with the hydraulic brakes. ‘I’m pushing the pedal and nothing seems to be happening! Every other car I’ve driven responds to the lightest tap of the brakes but not here.’

He treads harder and the car jerks to a halt. The traffic shuffles forwards as we approach our turn out of town and Peter slows time and again, unravelling the intricacies of the large second pedal. ‘The instant I move beyond the initial swing, the hydraulic system rushes to life and I over-brake. It’s such a mismatch with the accelerator, which feels instant.’ The sound rolling into the cabin provides another surprise. ‘I did wonder if the Conti would stay whisper-quiet but I can hear more of the engine than I expected. I wouldn’t say that’s a bad thing, of course.

‘It’s good to get that giant 6.75-litre engine working,’ he adds as we spear between the trees. ‘I can sense its L-Series roots stretching all the way back to the Fifties. There’s the slightest whistle under acceleration if I boot the throttle but otherwise it’s defined by the gentle hum of the V8 mixing with the noise of tyres on the tarmac. It’s a grand soundscape only Rolls-Royce and Bentley models of this era can ever create, and part of what makes the Continental R a proper Bentley.’

We ooze to a halt on Radmore Common to examine the leviathan from closer quarters. ‘The lines are simple but in no way bland and never fussy, with all the curves in the right places. They come together to create an extremely elegant design, and one that simply looks right. It’s strange. Bentley commissioned John Heffernan and Ken Greenley to style the car. The pair designed the Aston Martin Virage around the same time, yet one car is a bland disappointment compared to its V8 Vantage predecessor and the other still looks spot on.’

Peter surprises himself by falling for the standard 17-inch alloys. ‘In pictures these wheels have never appealed yet, now I’m seeing them in person, they really suit the car. Their design sits flush and seems like a set of hubcaps at first glance but look closer and they boast these delicate fins that form a fantastic styling detail, along with the body-coloured centre caps. Overall they match the Continental shape far better than the sportier styles fitted to the later Continental T.’

Retreating from the morning chill, we cast a discerning eye around the capacious four-seater interior. ‘Magnolia hide always looks resplendent and the Emerald Green piping suits this kind of car perfectly, keying into the Wilton carpets that match the exterior. My shoes are absolutely buried in the wool underfoot! Virtually everything else is covered in leather, save for the elm dashboard. The wood provides a wonderful contrast. ‘I can almost sense the hand-made finish. It’s present in the stitching, the minor controls that are all real metal and never made from painted plastic, the way the leather creaks as it rubs on more leather. I almost want to hear those little sounds. They add to the feeling of absolute quality, building that gentlemen’s club sense of falling into an armchair.’ For a car from the Nineties, in-car technology feels sparse. ‘What buttons they have fitted all work very clearly and don’t take much thought to figure out but I really thought there’d be more of them in here. ‘The foot-operated parking brake is mounted very high and sits adjacent to the bottom of the dashboard once it’s released, which makes it very tricky to catch and apply. I keep hunting on the steering column for the gear selector – in part because I imagine that’s where it will be on an older Bentley, though also because of the column-mounted system fitted to my modern Mercedes – and once I do find the shifter it has an unexpectedly light action. I’m overshooting the movement from reverse to drive if I’m not careful. It just doesn’t have the precision of the other major controls, which is a shame.’

A potholed, narrow B-road is as far from a sweeping autoroute as you can get but regardless, the big coupé quickly shows its polish. ‘The steering remains very nicely weighted, so I’m building confidence that the car will really go where I point it. I wouldn’t call it pinsharp but that wouldn’t be right for a big grand tourer anyhow. What it does offer is beautifully straight tracking mixed with enough precision to ensure it responds faithfully, making the Bentley feel reasonably taut for a car as large and heavy as this. It turns out the Continental R isn’t the ponderous cruiser that I feared it might be.’

‘Of course the ride is going to be comfortable but this is the Continental, after all, so I’m not surprised that it stops short of feeling over-soft. The balance between tautness and pliancy feels right, leaning towards habitability in a way that matches my hopes. Everything the suspension does is a compromise in the most impressive sense. No matter how bad this road gets, and though I can hear bumps through the structure, the car never crashes or wallows. Composed is the word.’

Extended exposure gives Peter the chance to better understand the brakes, though he still prefers a more conventional stopping system. ‘I’m learning that they will respond if I press the pedal lightly and wait for the performance, but the delayed response is still unnerving. They’re not progressive or easy to modulate, though they certainly are effective.

‘Now the engine is what I expect of a Bentley,’ he grins as the Continental sweeps us forwards. ‘All that torque gets the car going from very low revs, so I barely have to squeeze the accelerator to make progress. Power isn’t the point. This is a gentleman’s express and it provides effortless performance, swiftly moving us up to speed and then loping along smoothly and quietly. It’s exactly what I expect of the marque.’

Back at the workshop Peter hesitates for a moment, drinking in the experience one last time. ‘I can feel the ancestry behind every part of the Continental R. That makes for a special driving experience, one that combines the quality of the car with its sound, its interior and its oozing style. It wraps the car up in an evolutionary process that goes back to the T-Series and the Silver Shadow, whereas a modern Continental GT could be anything.’ Yet the Nineties machine won’t keep its place in his dream collection. ‘It wafts beautifully and I’m in no way disappointed but I’d like to go back a generation. The classic, hand-built features have been my favourite parts of the experience, so I’d choose a car that offers even more of them. I’d replace the Continental R with its predecessor – the Rolls-Royce Corniche.’

A joyful day, but Peter reckons the sweet spot lies a generation earlier.