The fastest Bentley yet

Early 2007. It’s cold. I’m cold. Very cold. Off to the left, a storm approaches. Helblindi the furious, white cape billowing, charging across a frozen Baltic Sea. Actually, it’s a Bentley Continental GT Speed – my first in the flesh – on its way to a world speed record on ice. Four-time World Rally Champion Juha Kankkunen is at the wheel. He careens past; it’s his second pass, 331 km/h on the bevelled dial. He smashes the Bugatti EB110’s 296 km/h record with an average for both runs of 321.6 km/h. Saucy stuff, exhilarating to watch, but terrifying to emulate. Twenty minutes later, strapped into my own – far tamer – Continental … let’s just say I felt like a boilermaker in hobnail boots at an audition for Swan Lake. 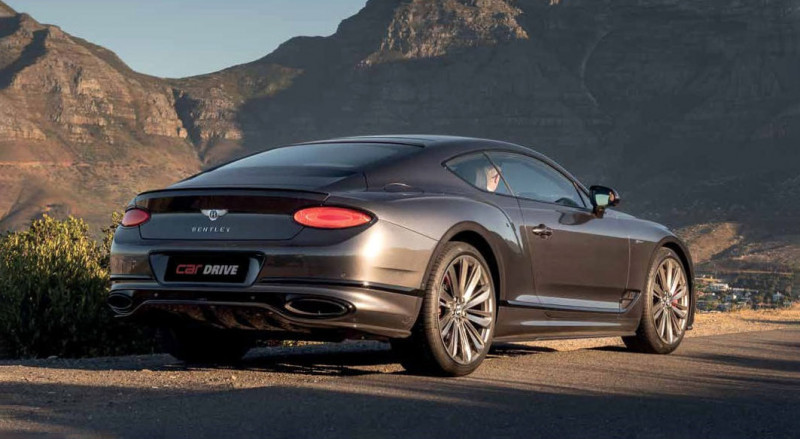 Round two. Bahrain F1 circuit, 2013.The good folk from Crewe had popped into Sakhir to show Crown Prince Khalifa and his chaps just how exciting a Bentley could be on a track. They had invited the local press as well, of which I was temporarily a member. Behind the wheel of the unassuming gold Continental GT Speed parked on the grid was a suitably buttoned-down fellow in a cardigan and soft shoes.

“Morning, Mr Frost,” he said. “Jump in. Let’s do a quick lap, shall we?” The rest is a bit of a blur. From the moment Walter Mitty buried his calf-skin loafer into the deep pile, my only thought was to survive the 12-cylinder onslaught. Slalomat highway speeds? Tick. Emergency braking from160 km/h? Done. Monstering through turns 5, 6 and 7, the infamous left-right-left high-speed S section? Survived. I came away with an empty stomach and a new appreciation for engineers out to defy the laws of physics.

An old friend, then. The Magnetic Grey GT Speed crouched diffidently in the corner of Toby Venter’s bespoke showroom in Century City. Outwardly, the latest GT Speed offered very little evidence that 12 cylinders of lawlessness lurked under the bonnet. Dirk van Braeckel’s muscular design – all haunches and Rubenesque titillation – suggested a grand tourer of the old school, ideal for bespoke transcontinental explorations, rather than lairy black-striping outside the Viper Lounge on a Saturday night. But venom there is, hinted at in the (optional) 440 mm diameter front discs and red callipers peeking through the 22-inch dark-tint wheels. There are other clues; look carefully and the GT Speed sits lower than the conventional Conti. Black-rimmed lights, grille and carbonfibre rumble strips hint at an undertow of disquiet, perhaps signalling that this paragon of establishment virtue is not quite the Churchill it pretends to be.

Inside there is little evidence of counter-culture either. Bentley would have you choose piano black or high-gloss carbon fibre over the traditional oak or ash veneers for your racier GT Speed, but it is still Viscount Astor at the Atheneum rather than Sergio Ramos at Del Diegos in Madrid.

Organ stops for the air vents; a be jewelled analogue clock; bespoke needlecraft; 11 or so of England’s finest heifers. It is a beautiful, cultivated, overstuffed place that manages to be cosy and spacious at the same time. I fired up the 12 and there was a distant throb rather than a roar, the first clue of an understated ethos and the coming experience. There was a Bond moment when a carbon-fibre cover in the centre rotated to reveal the infotainment screen. I pressed the “Screen” button on the console and the unit rotated again, this time presenting the assembled trio of antique-inspired dials: one for outside temperature, one a compass and the last a stopwatch. I selected a drive mode (Sport, Comfort or Bentley), snicked the slightly awkward gear lever into D and squeezed the throttle. The muscularity of the four-bank W12 was immediately evident, the 900 N.m of torque available at just 1 500 r/min. There was a classic push in the small of my back, hinting at the Polaris-missile amount of shove just under my right foot.

I pushed on and the 2,2 tonne Bentley miraculously shed weight, an act of alchemy more impressive the faster the car goes. Agility only improves and here is what’s new for 2022; bulleting out of the last of three fast corners, I was reminded of Bahrain, the sudden switch-switch change of direction that is absolutely no problem for the leviathan. Thank the suite of new technologies for that as much as the decent chassis setup. A very competent torque-vectoring system through the electronic limited-slip differential sends power where it’s most useful, and the electric active roll control system limits lean well. It was especially good in tightening corners where tapping off would be, if not a bad idea as such, at least disappointing.

In Sport mode, the AWD system sends most of the power to the rear; some 70%, which, the PR folk suggest, means you now get to play rear-wheel hero in your Conti, drift like a champion and frighten the children. In truth, that’s unlikely. Except on a track, the car’s limits are way beyond the skill or bravery of most regulation Bentley buyers. What it does mean is the Continental GT Speed is now even easier to drive quickly. That tweaked active suspension is a real boon, especially in the twisties. Easy, fun and satisfying. Which is exactly what a Grand Tourer should be all about. Splendid toy, Bentley.

01 The interior is as opulent and comfortable as you’d expect, with Speed-specific elements. 02 High-definition digital driver’s display is customisable and intuitive to use. 03 The onboard tech is operated via the central screen which uses familiar software. 04 With muscular proportions and clean lines, the Speed is one of the best-looking modern Bentleys.

01 Physical controls on the centre console make it easier to operate the plethora of features while on the move. 02 The engine is what makes the Speed unique. 03 Large brakes work well on such a fast and heavy car and for added stopping power, carbon ceramics can be optioned. 04 Flying under the radar, the overall design of the Speed is near identical to the V8.