The brawn ultimatum. Yes, you can still get a rapid saloon. No, it won’t have a big-bore V6.

The roads between Strasbourg and Mulhouse, just on the French side of the border with Germany, are busy, bumpy and arrow-straight for miles on end. Although there is a glorious mountain range beckoning west of the Rhine, getting there involves enduring speed restrictions that these days are vigorously enforced, even on the most minor roads. 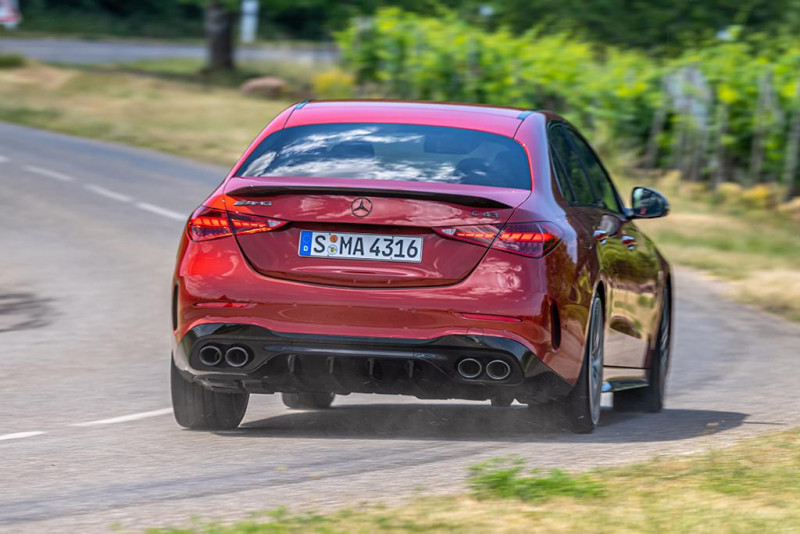 Not the ideal terrain to launch an AMG model? Patience, my friends, because the landscape does eventually open up, the forest gives way to wide open plains, and you can suddenly see for miles. At last, the Mercedes-AMG C43 is free to roam.

There’s much to investigate. This new car keeps the C43 name but drops the old V6 in favour of a version of AMG’s mild-hybrid four-pot. It also brings a new gearbox and standard rear-wheel steering, along with many other changes.

Good news first. The new C-Class offers more space, comfort, refinement and technology than the previous generation. The AMG sports seats are spot-on, the driving position suits all frames and postures, and the level of equipment is impressive. In the UK, there are two versions. Premium, priced from £64,110, and Premium Plus, for an extra £4000, which turns 19-inch alloys into 20s and adds a panoramic sunroof.

The C43 also scores with its composed handling, ace roadholding and benign behaviour in the zone separating drama from disaster. All in all, the Benz with the dogbone front bumper, the black rear apron sausage wrapping four fat tailpipes, and the tiny wee air deflector on the bootlid is an easy car to befriend. 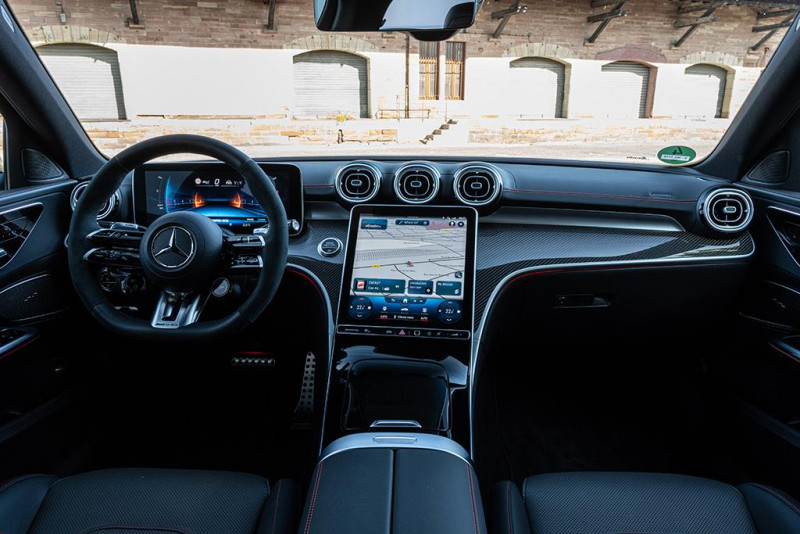 It finds the right rhythm almost by itself, morphs easily with the flow, is not a chatterbox but is communicative in a pleasantly pragmatic manner. The engine has its merits, too. It is eager to rev, neither rough nor rowdy and quite energetic considering the bonsai displacement and the reduced number of cylinders.

But there’s also bad news. There are a lot of menus and sub-menus to be negotiated in order to perform what should be simple functions, and those dreaded tiny shiny touchsliders cover the busy five-spoke steering wheel like a rash of monkey pox.

The drivetrain of the test car did not make the grade either. It felt as if its black box was filled with sedatives, not aphrodisiacs. There were plenty of situations when pick-up and turbo lag equalled that of an Audi V6 diesel – for instance, when arriving at a stop sign, eager to join cross traffic. The hesitant throttle response returns when cruising in a tall gear in Comfort, which forces the accelerator to take a deep dive before the transmission responds and kicks butt. The AMG engineers are aware of this deficiency, citing software issues which are allegedly as good as fixed.

Based on our test car, the C43 contains a dash of frustration which confirms that progress can be a double-edged sword. As also found in the current AMG 45, the four-cylinder on steroids develops 402bhp at 6750rpm and a feisty 369lb ft at an above-the- clouds 5000rpm. It has what Mercedes calls an electric exhaust gas turbocharger, which put simply means that at low revs the turbo gets some electronic assistance, to (in theory at least) eliminate lag. It’s tied in with the mild-hybrid system, in which surplus energy is stored in a 48-volt battery, which works with a belt-driven starter-generator to ease the burden on the engine and regular 12-volt electrics, for greater efficiency and responsiveness.

The C43 is, as before, available as both a saloon and an estate. The estate, priced at just £600 more than the saloon, is slightly taller and longer, but has the same wheelbase and the same power output; its 0-62mph time is a mere 0.1sec slower. Both have 4Matic all-wheel drive.

We drove the saloon, which weighs 1840kg, accelerates from zero to 62mph in 4.6sec and maxes out at a restricted 155mph. The official fuel consumption is in the low 30s; the test car managed 19.4mpg as we whipped it through the Alsatian mountains from the wooded foothills to the bald peaks. What are the main changes over the previous model? As well as rear-wheel steering now being standard, the 4Matic AWD hardware is rear-biased at a fixed rate of 31 to 69 per cent, and the transmission has gained a ninth ratio. The extra hardware involved in the electrification almost neutralises the weight advantage of the four over the discontinued V6, but since every kilo counts the axle load balance is marginally yet quantifiably more neutral and thus a little less nose-heavy.

The variable-rate speed-sensitive steering can be tweaked by changing the drive mode. Comfort equals less effort and a more relaxed gearing, Sport plus tightens the reins. The rear-wheel steering – which aids manoeuvrability at low speeds and stability at higher speeds – is only noticeable if you drive the old and new cars back to back. Adaptive dampers are also standard, as part of the AMG Ride Control suspension system. To combine the friendliest ride with maximum agility, choosing one of the set dynamic menus is not an option. Instead, it’s best to go for the configurable Individual setting and lock the shock absorbers in Comfort to secure a minimum of compliance before dealing with the dynamic temptations. The transmission in Sport and the engine in Sport Plus is our favourite choice for that coveted full-throttle punch at low to medium revs.

On top of all this there is AMG Dynamics, which offers three additional detail calibrations (Basic, Advanced, Pro) activated by tweaking the ESP and steering settings. Software nerds may be tempted, but the rest of us won’t miss much by ignoring it. The new C43’s numbers leave little to be desired. But the switch from a big V6 to a smaller, electronically enhanced four-cylinder engine has significantly changed the way in which those numbers are delivered.

Happily, there’s much about the rest of the C43 that is highly impressive. It suggests that the more powerful C63 – a four-cylinder plug-in hybrid – could be very interesting indeed; its unveiling is imminent.

And although the price and performance aren’t a terribly neat match (as the Merc is less powerful and less expensive), the new 43 brings an extra dimension to the eternal comparison between the C-Class and its German rivals, the Audi RS4 and BMW M3/4 – rivals that have not gone hybrid.

If what you liked most about the old C43 was its engine, then please move along. But the new one is a fine sports saloon ★★★★★

More room in the back than the last C43. Remember when Merc interiors were just two stalks and an ashtray? Revolution under the hood; evolution everywhere else.

2 minutes Gentlemen, start your engines. And notice that it’s only the artificial sounds that make it interesting

12 minutes Lots of speed bumps and cameras on this route. Boring…

20 minutes Oh here we go. And there’s lots to enjoy

MINUS Throttle lag; rough ride on big wheels; too little benefit from too