A nut-and-bolt restoration of this 190E 2.3-16 has allowed Jaz Duley to rekindle his treasured memories of youth.

Second life Following the sale of a much-loved 190E 2.3-16 in his youth, Jaz Duley bought and restored another

Most of us have a car in our past that we regret selling. Sometimes it’s a first car, or a lost love, or a home-grown build. It might be something that was affordable at the time, sold for buttons and has now become a valuable classic. Most true car enthusiasts worth their salt have a tale like this. But hey, you can’t keep ’em all, can you? 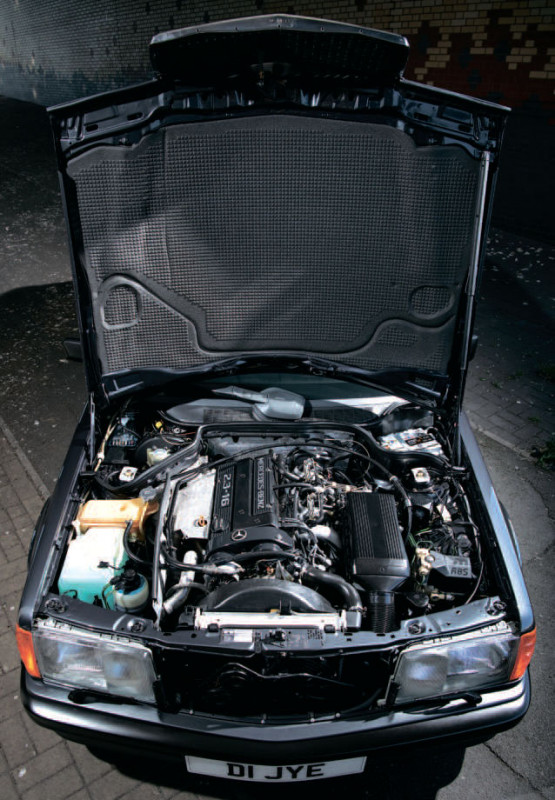 For Jaz Duley, the car in question was a Mercedes-Benz 190E 2.3-16. “For my 21st birthday in the year 2000, I treated myself to a 2.3-16,” he recalls. “At that time, it was very rare for a lad of my age to be driving around in a vehicle like this! If I remember rightly, I paid £3,000 and it had covered 100,000 miles. I went and fetched it from Derby from a trader who had taken it in as a part-ex and advertised it in the local newspaper. As soon as I saw it, I knew straight away that I would be bringing the car home, no matter what! I took it for a test drive and it just put a smile on my face. Next thing I knew I was buying it.

“The car was totally standard, and the only thing I added was a set of 17-inch alloy wheels,” Jaz confirms. “I enjoyed driving it for four years until sadly I had to sell the car so I could open the next chapter of my life – getting married in 2004. I sold the 2.3-16 to a good friend of mine, and told him that I would come back for it one day.” 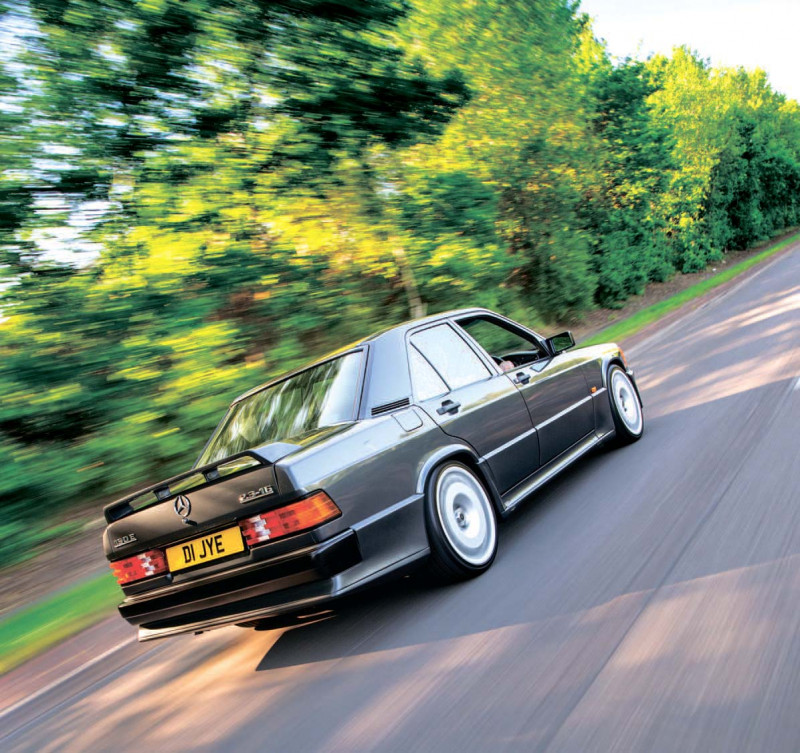 As formative motoring experiences go, that’s a real doozy. Of all the affordable used saloons on the market back at the turn of the millennium (say, the Sierra Sapphire, the Cavalier, the 405), the 190E W201 really was something special, and in 2.3-16 form it was supremely attractive.

Cosworth was approached to develop a four-valve head, with the aim of producing a reliable 182bhp

The model’s racing aspirations stemmed from the development of the two-litre M102 engine, which was identified as being a very happy recipient of a stretching out to 2.3-litres; Cosworth was approached to develop a four-valve head, with the aim of producing a reliable 182bhp (175bhp from September 1985) from the strengthened 2.3-16 four-pot. As well as the new head, Cosworth provided the sublime exhaust manifold and Mahle pistons, although impressively this was as far as the development needed to go – the M102 was deemed strong enough for the 40 per cent power increase, with even the stock rods remaining.

While all of this engine evolution was happening, so the base 190E was uprated to cope with the increased forces: spring rates were increased and ride height lowered, thicker anti-roll bars fitted, steering rack quickened, and an aero GRP bodykit developed to complement the saloon’s already impressive drag coefficient. With a strong, five-speed Getrag gearbox and an LSD, it made for a beguiling package as a road car and an exciting base for competition. With this car rubbing shoulders with the M3 and the Sapphire Cosworth, the sporting executive market was certainly vibrant in the late 1980s and early 90s. 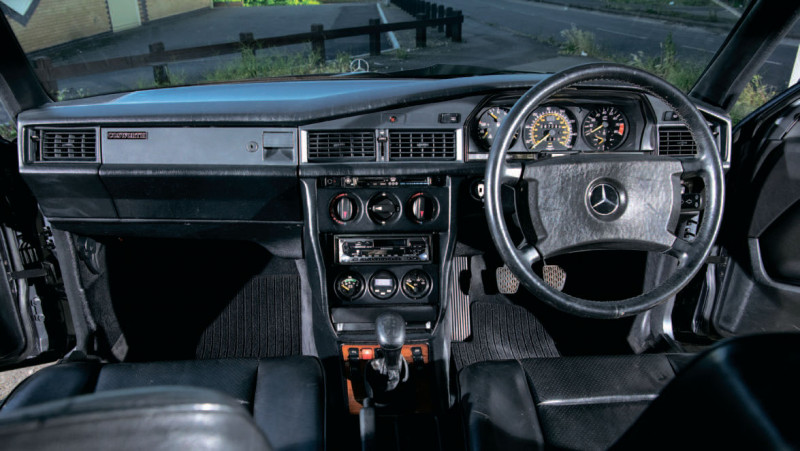 Of course, by the mid 2000s this was all just a wistful memory for Jaz. Having acquired a BMW 740iL for family duties, he was happy wafting around and generally getting on with life. However, the spectre of that 190E was niggling away, just occasionally, a little prodding at the base of his brain, until by 2015 the yearning became too insistent to ignore. The path was clear: he had to exorcise that particular demon and get the 2.3-16 back in his life.

“I contacted my friend, who told me he had sold the vehicle on – I was gutted,” Jaz laments. “So I took it upon myself to track down the 190E, which I successfully managed to do. It was in a very sorry state, but I offered to buy the car back – however the new owner refused my offer, so that was that. I began searching on eBay instead, and Auto Trader, papers and forums, to see if I could find myself a 2.3-16. Luckily enough, I found one on eBay in Cambridge – it was on sale for £4,200 buy-it-now, however it was on bid. I started the process of bidding, but there were three other bidders and, unfortunately, I lost the sale.

“I was very disappointed. I emailed the seller and told him that if the winning bidder for any reason changed his mind, I would take the car,” Jaz continues. “And guess what – he contacted me and said, ‘The car’s yours if you want it’. I jumped up in joy and said yes without even viewing the car!”

It was a highly emotionally charged situation, but had Jaz finally found the car to rekindle his memories of youth? Well, yes and no. “The next morning, I sent my brother to Cambridge to put down the deposit,” he explains. “When he saw the car, he called me and said, ‘Are you sure you want this? It’s in a right state, the car is scrap’. Without even thinking, I said ‘yes, put the deposit on’ so it was secured.

“The very first weekend I got off work, I arranged to collect the 190, making my way down to Cambridge. At first glance the car looked OK, but when I looked around it, I realised my brother was right – it was a total scrapper. However, having the experience and knowledge to carry out the repairs, I could see through all its problems. It had only covered 87,000 miles and had an outstanding history file – so in the end I paid £3,500 and took the car away. I couldn’t wait to start the restoration project.”

And start Jaz did, right away, stripping the Mercedes all the way down to a bare shell with all panels and doors removed. The engine and gearbox came out, and careful inspection of the chassis revealed that it had rather a lot of rot throughout. But Jaz wasn’t fazed by this – he was laser-focused on the end result and knew just what he had to achieve to get the car across the finish line.

Wasting no time, he cut the complete rear outer quarters along with the inner wheelarches on both sides, replacing them with fresh steel along with the jacking points. He had to do some fabrication around the rear window due to further corrosion, and the same went for the engine bay and bumper brackets; he ended up replacing all four doors as well as the wings, bonnet and bootlid. When his brother had described the shell as ‘scrap’, he wasn’t far wrong – but Jaz wasn’t about to be defeated by something as trivial as that. 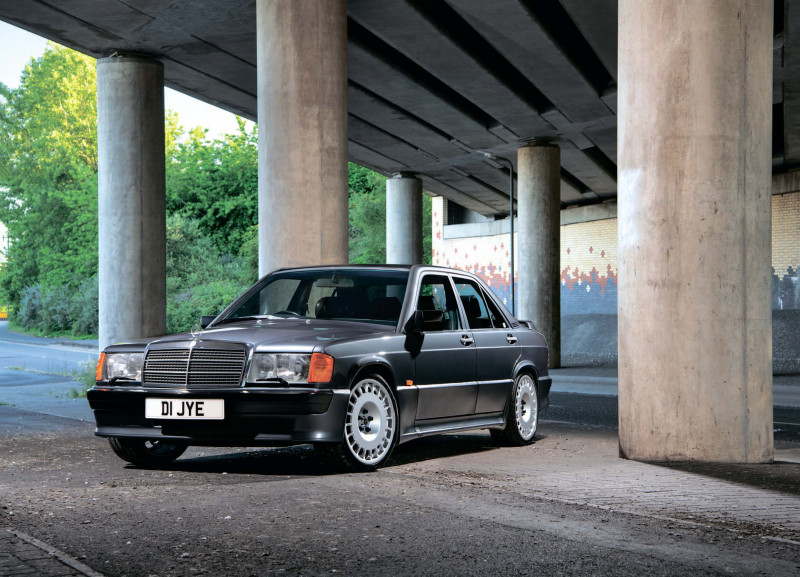 “All the panels I used were second-hand genuine parts without any damage, apart from the inner wheelarches that were new,” he explains. “Once I was happy with all the repairs on the body, the car received a complete respray inside and out with all panels removed. The paint was done at my workplace, however the complete build and prep was done by myself in the garden – I kept photographic evidence of it all and took over 800 pictures of the build. Once the body was prepped, I began bolting everything back on, replacing anything that was needed and refurbishing most of the original parts. I can confirm that this is a true nut-and-bolt restoration!”

No stone was left unturned here, with everything being comprehensively overhauled, from the brakes and suspension to the transmission, engine, electrics, interior, steering, exhaust system – you name it, Jaz perfected it. After five long years and countless thousands spent, the results are here before you – and it really does look remarkable, doesn’t it? The only deviations from stock specification are those sublime, 18-inch Compomotive TH1882 alloys with 225/35 tyres, and the fact that the factory half-leather interior has been upgraded to full black leather Recaro splendour.

“I am so happy with the outcome and the way the car looks,” Jaz beams, rightly proud of his stellar efforts. “When I’m in this car, it brings back memories as if I were 21 all over again. What a joy to drive!” And with that baseline of youthful memories to build on, we can be sure he’ll be making many more happy memories this time around.

All figures from Mercedes-Benz for a 1987 car as pictured; fuel consumption according to EEC urban

Jaz Duley: “Thanks to my wife for allowing me to carry out the 190's restoration while she held the fort! Thanks also to my parents for supporting me and allowing me to use their garden as a scrapyard, The Trade Centre for letting me use its facilities including the bodyshop to carry out paintwork, Leon Evans (bodyshop group manager), Lee Gorton (head of quality and vehicle repair), Mark Arnold (bodyshop supervisor), Ian Watts (painter), Andy Paskin (paintless dent removal), and finally Jason Ward – my friend who helped me on the very last stage to rub the primer down to meet my deadline for paint.”

Gauges for battery and oil temp, plus timer.

LASTING MEMORIES Jaz took over 800 photos of the work in progress and keeps them in a slick album. He's since added pictures of moments when he and his family are enjoying the 190E together.

In-car phone tech has come a long way since…

A little over 87,000 miles on the odometer.Five-speed dog leg manual gearbox; leather-wrapped helm.

I realised my brother was right – it was a total Scrapper

Jaz Duley with son Jay and his restored Cosworth.