CURIOSITIES FROM THE AMAZING WORLD OF ITALIAN CARS

In 1966, the Lamborghini Miura changed the world forever. It created a new car class – the supercar – and its Marcello Gandini-penned shape fired imaginations across the world. It was wild, sensational, extreme.

But not extreme enough for a certain Luigi Colani. This iconoclast of the design world, the son of a Swiss-Italian father, was born as Lutz Colani in Berlin in 1928 but later changed his name to the Italian form, Luigi. A prolific industrial designer, he had a strict penchant for ‘biodynamic’ design, characterised by curvaceous, organic forms.

The Miura for him represented an opportunity to express, as was his wont, something truly ‘out there’. In 1970, he presented a car that used Miura parts in a phantasmagorically outlandish new setting.

From the original Miura, only the rear half of the chassis was kept, complete with its powertrain and wheels. His idea was – wait for it – to concoct an articula vehicle, the front and rear ends moving independently of each other, with a simple metal bar between them. The enclosed front wheels were steered using a joystick sited centrally between the two seats. 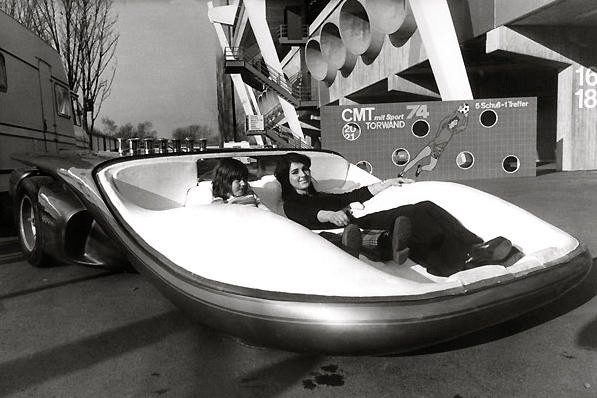 The utterly radical bodywork was realised in glassfibre. The front half resembled a giant squashed egg yolk topped off with a huge Plexiglas dome. The latter opened upwards and to the side to access the cabin, which resembled a wild experiment in psychedelic furniture design (another Colani sideline). The two passengers sat almost horizontally beside each other, penned in by oversized wheel housings, their feet pretty much touching the front of the car. Behind them, prongs tapered back to the tail of the car, hovering above the separate rear body.

This rear section included the Miura V12 engine, transmission, axle and brakes. Twelve intake trumpets stuck out proud of the whole edifice, there were cooling intakes to the sides and a cut-off Kamm tail with four exhaust pipes protruding. Did the car ever run? That’s extremely doubtful. 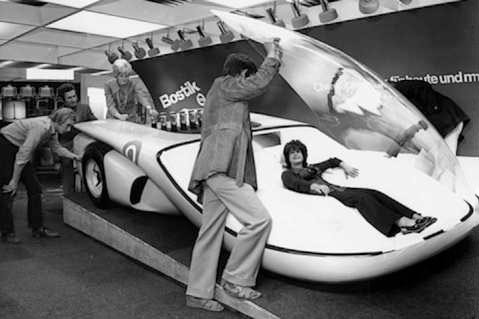 Colani’s Miura was displayed at several shows during the 1970s. Originally painted a lurid shade of yellow, it was repainted in 1974 in a new blue-and-gold colour scheme. It was even referred to as the Miura Le Mans because – scarcely believably – it was mooted as a potential debutante at the legendary French endurance race. Would you drive an articulated V12-engined forward-cab one-off down the Mulsanne straight at a claimed top speed of 300km/h (186mph)?

Perhaps not. During the 1970s, Colani’s bizarre contraption was exported to the USA. It then disappeared until 2010, when it emerged on eBay in a somewhat dilapidated state (no engine, body in pieces and canopy broken). It was subsequently restored, complete with its original yellow livery and a new canopy, in Germany. In this form, it was seen for the first time in decades at a recent exhibition at MAUTO, Italy’s national car museum. Let’s hope we’ll see more of this truly extraordinary machine very soon.