In recent times, Porsche has proved itself exceptionally good at exploiting past glories for the benefit of contemporary model line-ups. Even when taking only the last two or three years into consideration, we've lost track of the dizzying number of limited-run 911s, Boxsters and Caymans to roll out of Zuffenhausen with trim linked to various landmarks in Porsche history. Of note, there was the Belgian Legend Edition, ostensibly a standard 992 Carrera 4S finished in a colour inspired by the safety helmet worn by Jacky Ickx. There were various Heritage Design Edition models based on 911s sporting standard chassis and powertrains, but trimmed in materials echoing what Porsche was making use of in its early years. More recently, we were presented with the 982 718 Boxster 25 Years Edition and the Porsche Design 50th Anniversary Edition, a 992 Targa 4 GTS finished in a colour scheme intended to bring to mind the famous Porsche Design Chronograph I launched in 1972. 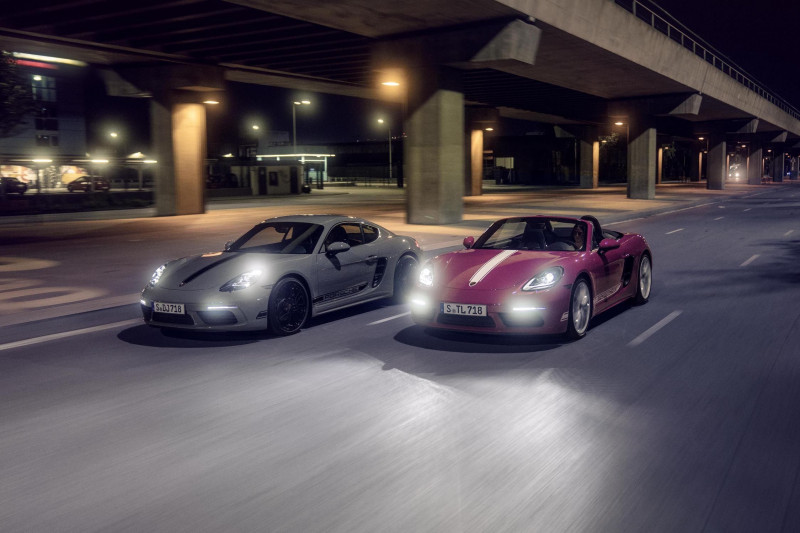 Here we are, then, in the company of the 718 Style Edition 982 models, based on the entry-level versions of the current Boxster and Cayman. Essentially, this is another styling exercise taking inspiration from Porsche models of yesteryear, not least the 964 Carrera RS, which lends its iconic Rubystone Red paintwork to the Style Edition twins, though the colour is now known as Ruby Star Neo, .a modern interpretation. of the deep pink hue worn by the bucket-list Rennsport. You can, in fact, have your 718 Style Edition Boxster or Cayman in another colour altogether, somewhat diluting model identity, though Porsche points to twenty-inch 718 Spyder wheels, black tailpipes and Porsche script in high-gloss silver at the rear of each car as a way of the Style Edition duo standing out in a crowded car park. Porsche lettering in high-gloss silver appears at the back of each car, while for the 718 Style Edition drop-top, the Boxster moniker is embossed on the canvas roof above the side windows. We like this touch very much. 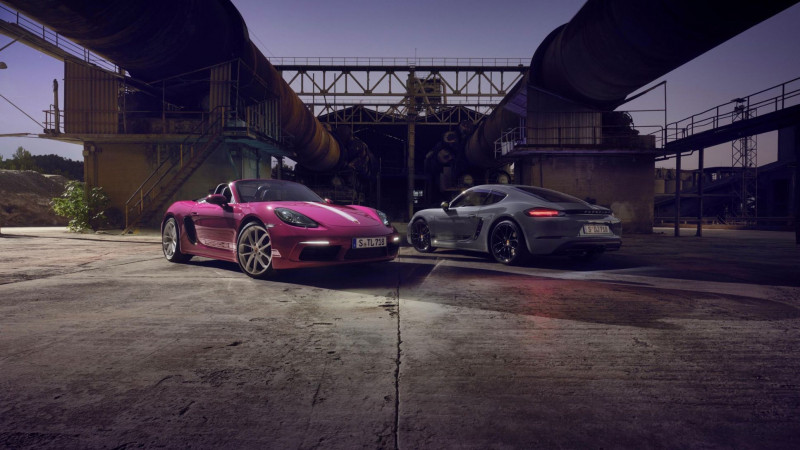 Porsche showroom visitors can choose between two different 718 Style Edition contrast packages at no extra cost. Pick between black or white. Both include decorative stripes on the .frunk., as well as classic Porsche stripes down each flank. The wheels are colour-coded accordingly, while the interior of each car features leather in black with contrasting Chalk stitching. In here, you'll also find illuminated stainless steel sill kick plates and Porsche crests embossed into the head rests. Extended standard equipment adds to the appeal, though it.s difficult not to get excited by the sight of any Porsche dressed in Rubystone Red, Rubystar Red, Ruby Star Neo or whatever else the manufacturer wants to call it these days. Bi-Xenon headlights with LED daytime running lights feature, as does ParkAssist with rear camera, Porsche Communication Management with Apple CarPlay integration (sadly, no apparent compatibility with Android Auto), automatically dimming mirrors, heated steering wheel, heated seats, dualzone climate control and floor mats with Crayon stitching. In terms of powertrain and chassis, it.s standard fayre, though this still means you get close to 300bhp from the force-fed two-litre boxer behind the seats. A sixspeed manual gearbox is the default transmission, a seven-speed PDK is optional. Regardless of cog swapper, top speed is a shade below 171mph, while torque registers a smidge under 281lb-ft. The sprint to 62mph from a standing start takes 5.1 seconds (4.7 seconds for PDK). Order books are now open at Porsche Centres worldwide.

ANOTHER STYLING EXERCISE TAKING INSPIRATION FROM PORSCHE MODELS OF YESTERYEAR