You probably have one of his books on your shelf. In 50 years he produced more than 170 of them, being one of the most prolific authors in the classic business. His writing was always crisp, clear and to the point, befitting a man who was a motorsport team manager, engineer and rally co-driver in his time. He entered journalism in the Sixties with Autocar and, after a short spell at seat-belt maker Kangol, he went freelance with a plan to write books that would appeal to the growing classic car movement. That led to him becoming probably the most well-known and best-loved of all historic motoring authors. He never retired and was working on a big project at the time of his passing. Our thoughts are with his family and friends.

Graham was closely associated with the Triumph marque, among others.

We are sad to report that Graham Robson died unexpectedly on 5th August. He suffered a bad fall back in May that fractured his hip, but he had appeared to be recovering well, if slowly. Indeed, in a telephone conversation just a few days before his passing, Graham sounded fed up with not being able to get out and about, but as feisty as ever.

Born in Skipton in Yorkshire on 18th January 1936, Graham attended the local Ermysteds Grammar School before going on to read engineering at Lincoln College, Oxford. When Jaguar set up a graduate training scheme in 1957, Graham – along with his friend and fellow student Jim Woodcock – became the first members, starting in September of that year. After a spell learning all manner of skills on the factory floor, in 1961 Graham moved to the Engineering Drawing Office, which he described as a very exciting place to be. In 1965 he became Competition Secretary at Standard-Triumph, later joining the staff of Autocar and also working for the Rootes Group. From 1972 he worked as an independent author, writing over 160 books and innumerable magazine articles. Motorsport was always close to his heart and Graham also had a very successful rally career, starting with local navigational and driving skills rallies in the family Ford Consul in the mid-1950s. He went on to join the Sunbeam Works team in 1961 and co-drove very successfully with them and others, one high point being victory on the Welsh International Rally in a Lotus-Cortina with Roger Clark in 1965. He was also involved later in running many different rally championships for Ford Motorsport. In more recent years Graham was in high demand as a presenter, commentator, public speaker and event organiser. His interests spanned many marques, but I always associated him first and foremost with Triumph, and as Lesley Phillips, President of the Stag Owners Club, reminded us: 'Almost 25 years ago Graham was one of the founders of the Standard Triumph Forum, bringing together the Standard and Triumph clubs in the UK. He was instrumental in the various anniversary celebrations, starting with the 75th anniversary of Triumph in 1998, and more recently was keen for the clubs to come together to celebrate the 2023 Centennial Anniversary of Triumph. He was busy planning the after-dinner interviews for this event, making good use of his wide range of contacts in the motoring world.' I knew Graham personally from the Standard-Triumph Forum, and through the many columns that he wrote for MG Enthusiast, Triumph World and Classics Monthly magazines. I found him to be a man of strong opinions (and never shy of voicing them!), direct, passionate about all things automotive and with an encyclopaedic knowledge which he was always willing to share most generously. Graham is succeeded by two sons, Hamish and Jonathan, to whom we send our condolences. 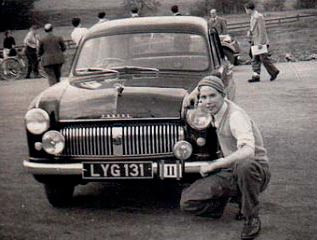 A young Graham Robson pictured with the family's Consul (their first ever car) at a local rally, some time around 1954.