Hyundai raises the design stakes with its next electric car, the streamliner-inspired Ioniq 6. By Tim Pollard

NOW TRY TO BEAT THAT, EUROPE

The textbook example of a car manufacturer transforming from utilitarian basement-dweller to slick creator of desirable mainstream products has, for a long time, been Skoda. But we’d argue that Hyundai deserves equal plaudits – and nowhere is this truer than with the new Ioniq 6. An all-electric CLS for the masses, it proves how electrification is an opportunity for brands to reinvent themselves. 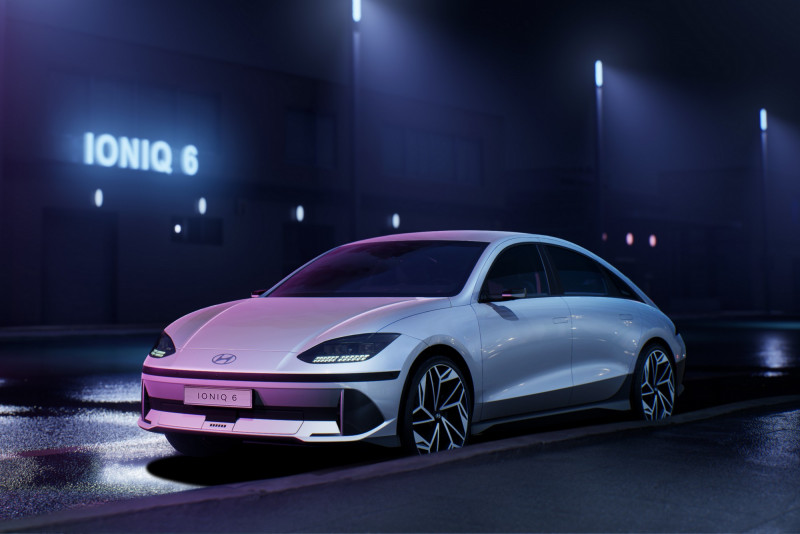 Following in the eco tyre marks of the Ioniq 5, the 6 takes the Hyundai Motor Group’s electric car architecture and replaces the 5’s tall body with something altogether longer, lower and sleeker.

It’s very much in the slammed ‘coupaloon’ style of the CLS, the Mercedes-Benz four-door that ripped up the saloon rulebook at launch back in 2004. 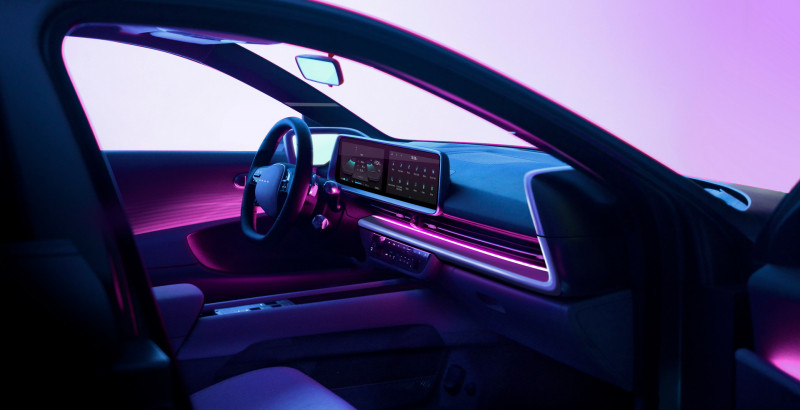 Yes, it’s watered down from 2020’s dramatic Prophecy concept, but it’s still a dramatic merging of retro, modern and futuristic, and equipped to play a starring role in the EV revolution.

The 6 is the second member of the new phase of Ioniq-badged Hyundais, replacing the original Ioniq that’s now been quietly sent out to pasture. And there’s more to come in quick order, with an Ioniq 7 SUV due next year and more to come.

The original Ioniq might not have set pulses racing, but certainly laid some very solid foundations for Hyundai’s exploits in electrification. Lessons learned from that ugly duckling have been piped into the clever-clogs Electric Global Modular Platform (E-GMP), the common skateboard foundation for all the next generation of Hyundai EVs.

It comes with a choice of 58kWh or 77kWh batteries, 800-volt rapid charging, two- or all-wheel drive and V2L energy management to allow the car to provide as well as consume electricity. Which is why you’ll find influencers boiling kettles plugged into Ioniq 5s on social media. Might seem frivolous today, but smart domestic power broking could become a major selling point for electric cars in an energy-challenged world.

The Ioniq 6 hides its technological chops with ease. We find an attractive, low-slung four-door, measuring 4855mm long and 1880mm wide – similar to the footprint of a BMW 4-series, but with a super-stretchy wheelbase a whisker under three metres for exceptional cabin space. It’s roomy in there, matching Skoda Superb accommodation for legroom in both rows, though the swooping roofline means headroom is merely decent rather than exceptional. The wardrobe is noticeably different from the striking Ioniq 5’s, yet much of the detailing is retained.

‘There’s nothing wrong with a “Russian doll” design strategy, but we wanted a “chess piece” look,’ Hyundai’s design director SangYup Lee tells CAR. ‘All Ioniq models will look different, but when you see them together, they make sense.’

Where the 5 is all crisp metal surfacing and surprising dimensions – towering above contemporary hatchbacks – the 6 is defined by its smooth, arcing lines and low-slung stance. It’s not quite as dramatic as the delectable Prophecy concept, but it’s not far off – and it’s dripping with neat touches that provide a link to other Ioniqs. The pixel design of the lights, for instance, is brutally modern and fun.

‘The pixel shape is important,’ says Lee. ‘The light signature is part of our new face. It’s a repeating theme. It riffs on the digital world and people’s love of games like Minecraft. Why? Because Ioniq is about nostalgia, but also futuristic.’

It’s an astute design mantra: seeking beauty from the streamliners of the 1930s, with their archly aero aesthetic and exaggeratedly curved bodywork, but also from the digital world of today.

If you want to see Hyundai let its hair down, check out the flashing lights strobing across the Ioniq 6’s cute ducktail spoiler on start-up. ‘Yes, we acknowledge we’re referencing Knight Rider,’ chuckles Lee. And why not? Some punters growing up watching Michael Knight solve crimes in his semi-autonomous Pontiac Firebird will now have the bucks to buy a car like this. How many bucks? The Ioniq 6 is likely to cost from around £45k when it arrives in dealers this winter.

Hyundai is positioning its i range of traditional hatchbacks and individually named SUVs as the combustion and hybridised core of its line-up, while Ioniq is marketed as the fully electric offshoot for progressive types. It’s a way of hanging on to traditional buyers more cautious about plugging in while simultaneously resetting our expectations of what a modern Hyundai can be.

‘We have a 50-year legacy at Hyundai,’ says Lee. ‘It’s why we did the heritage programme with the Pony and Grandeur: to remind people where we’ve come from. Don’t forget that Giugiaro’s first two major design programmes were the [VW] Golf and the Pony. We’re proud of our past, but reinventing ourselves for the new world order. The Ioniq 5 will not age fast; it is our 911.’

The 5 and 6 share so much, yet project a different flavour: the pop-out filing-cabinet glovebox, touchscreens and digital-first vibe are common, but you’ll also spot new (and optional) cameras for door mirrors, ribbed door cards and translucent door pockets, apeing the see-through chic of late 1990s iMacs.

There’s a lot to take in, but passengers’ first impressions are of abundant space and modish design. It’s a classy, feelgood cabin with a progressive personality that treads just the right side of trying too hard. Which goes to show what electrification has done for Hyundai: it’s accelerated the company’s rise to the upper echelons of volume-brand desirability. It’s quite the turnaround.

Hyundai is really letting its hair down with the 6: it couldn’t be more different from the Ioniq 5 if it tried. Where that car’s expression is 1970s modernism, the saloon’s muse is decidedly retro: design chief SangYup Lee name-checks the 1947 Saab 92, 1950s de Havilland jets and 1936 Stout Scarab as inspiration. ‘We were inspired by the streamliners of the 1930s. It’s a look that won’t age 10 or 20 years on.’ That rakish design also guarantees wind-cheating aerodynamics: the drag coefficient is a slippery 0.21.

Angled screens make it easier for driver to see images from door-cams.From the overall shape to the smallest detail, Ioniq 6 is a work of art.

IT’S ROOMY IN THERE, MATCHING SKODA SUPERB ACCOMMODATION FOR LEGROOM IN BOTH ROWS