When new, the first generation SLK mesmerised with its seductive looks, vario-roof arrangement and sporty handling, and now you can pick one up for just a few thousand pounds. Words David Sutherland. Images Terry Oborne & Daimler AG.

With its super stylish, compact body, amazing folding metal roof system and a price that was affordable by Mercedes-Benz roadster standards, the original R170 SLK was no less than a sensation when launched in late 1996. The ‘junior’ SL instantly hit the spot, dealers needing to do little more than sit back as orders poured in and delivery queues lengthened; in the early months of production, cars in the UK changed hands for over the list price of £29,000, even against a quite generous supply from Stuttgart, some 2,400 delivered in the UK in its first full year on sale (twice the SL volume), sufficient for it to out-sell the Porsche Boxster 986 and Toyota MR2 combined. 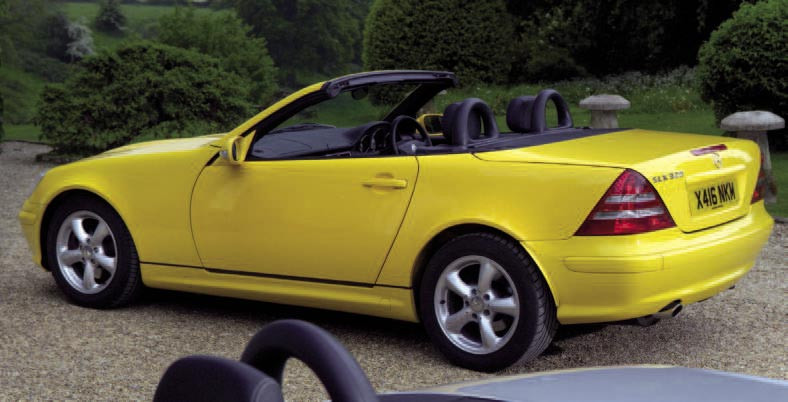 For its vario-roof alone, the SLK (‘K’ for ‘kurz’, or ‘short’) was an engineering marvel. The roof was the first of its kind in the modern era and collapsed into the boot in 25 seconds, turning a cosy coupe into a full, no compromise open roadster, and with pop-up rollover protectors. A joint venture company, Stuttgart-based CTS GmbH (Car Top Systems) had even been established to make the roof. And inside, the SLK was a delight: well-built and an appealing combination of a modern design but with some retro detailing such as sunken instrument dials.

Yet it arguably did have one weakness – the engine. Mercedes-Benz offered only four-cylinder units, the principal model the SLK230 Kompressor using the then new M111 supercharged 2.3-litre four-cylinder unit producing 190bhp, and 207lb ft torque. This, in five-speed automatic form was the sole model for the UK, and the powerplant was the R170’s least likeable aspect; powerful enough but unrefined and gruff sounding. Mercedes management claimed a six-cylinder model was not necessary as customers would be happy with the four-cylinder engine. However, that mindset changed when at the facelift the normally aspirated 3.2-litre V6 SLK320 was added to the range.

Production of the R170 ceased 17 years ago, to make way for the more aggressively styled R171, and while the series is showing a glimmer of collectability, this is still a cheap Mercedes-Benz roadster. There are still quite a few SLK320s around for sale, prices ranging from £2,000 to £10,000, so how does it differ as an ownership prospect to the SLK230 K R170?

The SLK was based on a C-Class platform, its styling overseen by legendary Mercedes designer Bruno Sacco in his final years at Mercedes-Benz, and was notable for its short overhang and clipped tail. It was not intended to be a ‘proper’ sports car, more a tourer and hence with quite soft chassis settings including Mercedes’ traditional recirculating ball steering that prioritised shock absorption over feedback.

For the four years from launch to the February 2000 facelift, the SLK ran unchanged, save a few specification tweaks. Aesthetically, the revamp saw Mercedes’ usual type of mid-term updates, including restyled front and rear bumpers, new sill trims, painted radiator grille and stainless steel exhaust tips, while the side indicators were moved from the wings to the door mirrors.

Inside, the original carbon look gave way to aluminium style trim, the steering wheel was redesigned and wood trim became an option for the first time on the SLK.

A six-speed manual gearbox was offered for the first time on UK-bound SLKs, including on the V6 car. Wheels were 16-inch alloy with 205/55 front and 225/50 rear tyres; 17s were optional and many 320s have them.

From then until the end of production there were no engineering or aesthetic changes, but – perhaps with customer demand not quite as hot as it had been at first – there were two limited editions of the SLK320 (and also the 230) released in that period. The first came in June 2002, the SLK320 Limited Edition which was equipped with 7.5Jx17-inch Evolution alloy wheels, black nappa leather, brushed aluminium interior trim and a silver instrument panel with white dials.

The second came as the R170 was in its run-out stage, in January 2004. The SLK320 Special Edition featured a chrome grille and bootlid handle plus bright polished exterior trim strips, and again nappa leather trim, including on the rollover bars; these cars are identified by the ‘SLK Special Edition’ badges on the wings.

The SLK320 brought a new dimension to the R170 range. It’s not much quicker than the SLK230, but the normally aspirated V6 is so much sweeter and smoother than the four-cylinder, and is well suited to the manual six-speed gearbox, its shift a big improvement over previous manual Benz ’boxes. Handling is comfort, not sports oriented, with shock-free but largely uncommunicative steering, and soft springing that aides ride comfort but allows the Mercedes to roll somewhat through corners.

The cabin is a tight fit for occupants and with a high door line you can feel closed in. But the driving position is perfect and the seats supportive, and oddment space is good, including a decent glovebox despite the presence of a passenger airbag. The facia was an interesting design given the blandness of many late 1990s Merc interiors, and the switchgear feels solid, the SLK cabin thus retaining the quality feel that some Mercedes models were about to lose. Most SLK320s have leather, which adds to the ambience.

The SLK320 appears to command a small price premium over the 230, but you will still see cars for £2,000 or less. But the usual rules regarding false economy apply and we recommend regarding £4,000 as the sensible entry point for a car free, or largely free, of problems. The most common price for 320s is between £4,000 and £5,000, this bracket offering cars from both private sellers and used car dealers.

An SLK in exceptional condition and with low mileage is going to cost up to £10,000. We saw one such example, a 2003 car with 32,000 miles in silver over red leather offered by Kingdom Specialist Cars in Hampshire, asking price £9,500.

It’s not a car that tended to rack up high mileage, often a second one in the household, so you’ll see plenty with moderate mileage, between 50,000 and 70,000. When looking for an SLK320, it’s worth noting that all but the very earliest examples are EU4 rated emissions, thus avoiding the extra charge for London’s Congestion Zone and others to come.

All figures from Mercedes-Benz; fuel consumption according to NEDC Combined

V6 trumps the four-cylinder for smoothness and sounds fantastic; SLK320 offered with a two-mode auto or manual.

“Good news – the M112 V6 has proved to be bulletproof. It’s very reliable, much more so than the four-cylinder Kompressor engines and we don’t do very much to them.

“The main requirement on the SLK320 is to keep on top of oil changes, so look for a full service history. Most cars are automatics, the manual being very rare – I’ve only ever worked on a couple of them.”

During development, the R170 was tested in Death Valley and around the Pico Veleta in Spain; roof opens and closes in 25 seconds. New seat suspension was developed for the R170; ASR and ABS fitted as standard; ivory coloured dials a nod to SSK and SSKL.

The R170 SLK was the most practical ‘small’ roadster of its day, and even now remains a car that is fun and useful in equal measure provided you need only two seats. It also has its own charm among the three model generations, many liking it for it being the most pure and simple in appearance.

Is the SLK320 better than the 230 Kompressor? Its on-paper performance is little different, and it lacks the supercharged four’s mid-range punch. But it brings the six-cylinder refinement many seek in a Mercedes. Auto or manual? The majority are the former, so if you want to swap gears yourself you won’t have such a wide choice. However, the most important consideration is the car’s overall condition, given that the early ones are now over two decades old. As we’ve said, rust is now a major problem and isn’t always easy to spot. So, we would recommend paying more for a better car, especially as when these Mercedes eventually become viewed as classics, the best examples will be in most demand.

Mercedes’ inspiration for the original SLK came from an unlikely source – the Mazda MX-5. The affordable Japanese two-seater, launched in 1989 as a Lotus Elan for the modern world, had been a major hit, finding 70,000 homes per year by 1991, proving that the market for such a model had not died with 60s sports cars. Mercedes-Benz planners had in fact been considering a small and civilised roadster since the late 1980s – but the popularity of the Mazda hastened Stuttgart’s re-entry to the niche it had all but created with the 1955 190SL W121 BII, but then gradually let go of as subsequent SLs grew in size. There were understandable questions over whether such a roadster would steal sales from the R129 SL, and could be built cheaply enough to still yield a profit given that it would have to be priced much lower than the SL. But the car maker took a chance and scored a major success, the SLK a popular model for the next 25 years.