When Mr Ikeda, of Garage Minimum in Japan, came up with the idea of producing a ‘short-tail’ fastback Mini he had no idea that someone else had designed a similar concept back in the 1960s.

Mr Ikeda of Garage Minimum of Kanazawa City, Ishikawa,Japan, has created a striking fastback Mini as part of his Trafalgar series. This is the seventh Trafalgar and the first coupé-bodied version which has a different rear. This one is based on a 1994 Rover Mini Monte Carlo LE. The profile curves down from the middle of the roof to the rear and was inspired by the ‘long-tail’ Broadspeed GT Minis of the 1960s.

Mr Ikeda, chairman of Garage Minimum, explains: “the Trafalgar series comprises customised Minis mainly featuring interior and exterior modification but I decided to try to build a new bodywork design.” He says that this project was the culmination of a dream that he has had for a long time. “I love the Mini-based fastback Broadspeed GT,” explains Mr Ikeda. “That was my favourite Mini. When I asked our contracted bodywork specialist he said long-tails are a costly job but, if it just has a fastback and the original Mini shell, that is possible. Dreams come true. I can build a long-tailed Mini like a Broadspeed GT just for me but I decided to build the short-tail fastback Mini as the flagship of my Trafalgar brand.”

“I decided to build the short-tail fastback Mini as the flagship of my Trafalgar brand.”

The rear end retains original parts including the boot lid and rear windscreen. The big changes are the rear half of the roof which now slants down to the back and is made of GRP. The quarter window glass is made from acrylic plastic. “The paint colour of this Mini is Tundra, a 1970s Mini colour, says Mr Ikeda.” 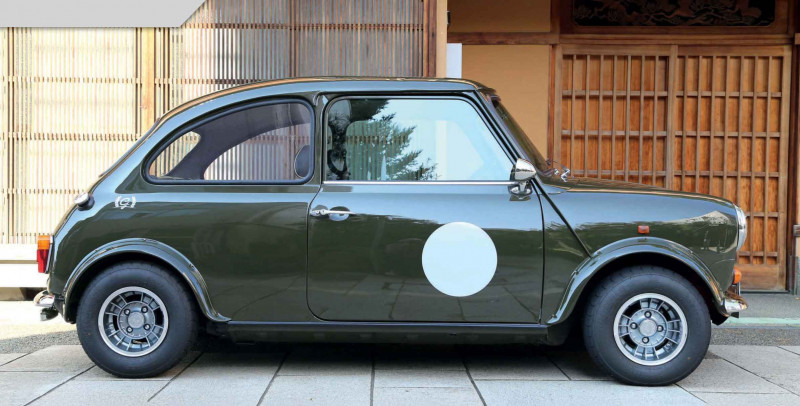 The front end retains its 1990s Mini grille shape and the rear utilises Mk1 rear lights. The Trafalgar is also fitted with wide, curvy arches and striking wide repro JAP alloys. Bullet door mirrors, made by Runabout, and a sump guard are fitted. A white competition roundel on the door finishes off the styling nicely. Although the door roundels and novice racing sticker on the rear pertain to motorsport use, this demonstrator Mini’s engine has not been modified so it retains its original 1275cc SPi powerplant. Customers asking Garage Minimum to build them such a car would be able to request a plethora of mods, including engine upgrades.

“This is only a demo car and we have worked on the roof conversion only by extending the roof line. There are a lot of options. They can be made to order with any kind of requests. You can buy a complete car but you can also bring in your Mini to us to customise and even refresh it at the same time.” 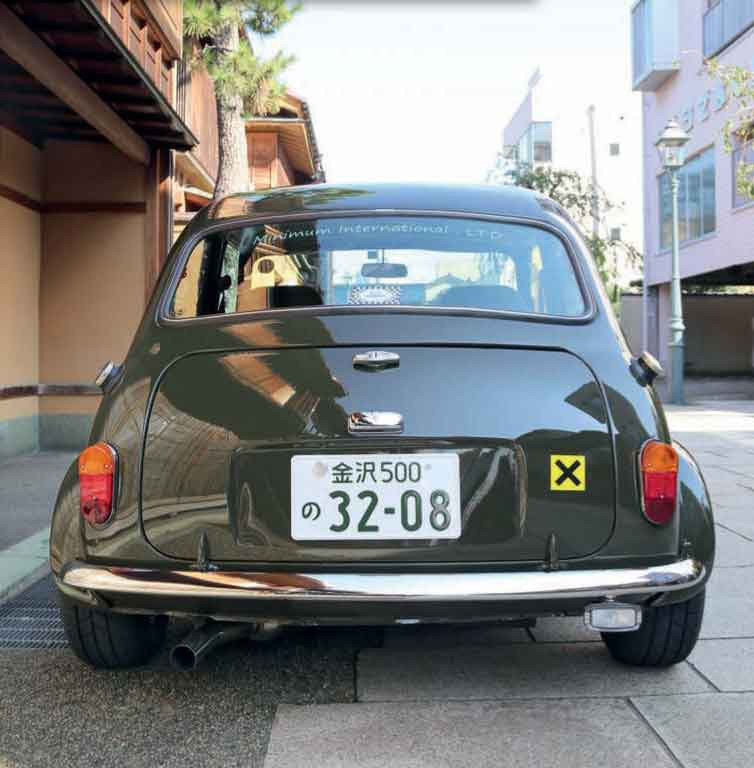 During the build of this Mini Mr Ikeda shared some photos on social media. “When I put up the pictures of the half-built Mini on my Facebook I got a re-tweet from my Taiwanese Mini friend. He told me there was similar custom-built Mini in Australia. We found an article on it in Australian Hot Rod magazine from 1966. The car was built by Bill Buckle and is similar to my Mini Trafalgar Coupé. 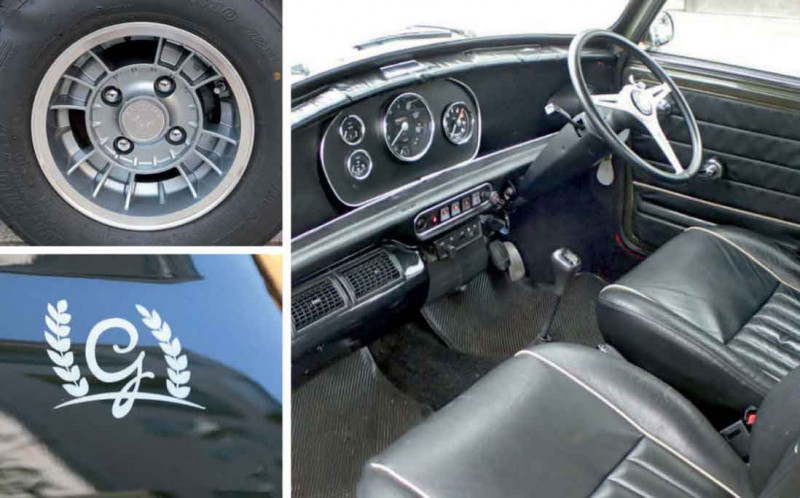 Reproduction JAP Magna alloys. Minis produced for the Japanese market had air conditioning. The G emblem was designed by Mr Ikeda.Mr Ikeda came up with the Co up é body in his mind and he put it on to paper.

That’s a strange coincidence!” The first three Trafalgar Coupé Mini conversions will cost a special price of ¥700,000 which is the equivalent of around £5,000.

However, Mr Ikeda warns that the metal moulds used to make the GRP section won’t last forever. “The first 10 cars have a guarantee to build but I don’t know afterwards. Let’s see what happens.” This means that there will be a very limited number of people who can own an example of a Trafalgar Coupé. 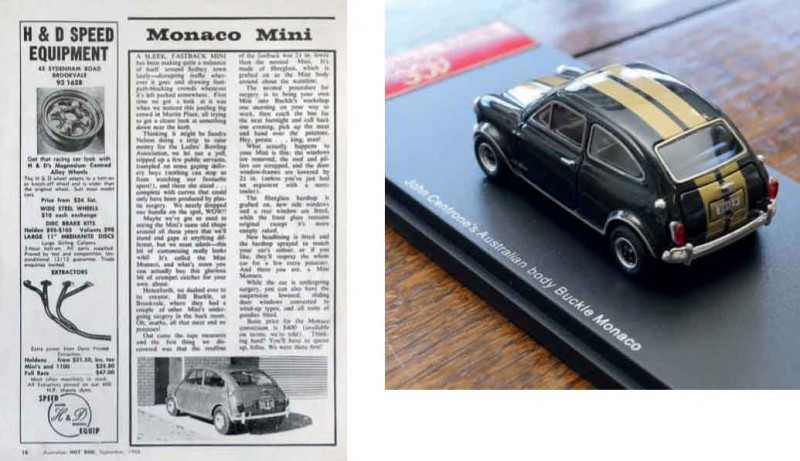 Bill Buckle had the original idea for short-tail fastback Mini in Australia in the 1960s. Modifications for his Monaco included further mods to the roof line, including an angled A-pillar. Mr Ikeda has kept the original Mini roof line and only modified the rear.A Buckle Monaco diecast model was used to create a model of the Trafalgar Coupé.