Todd and Patty Bourgon’s 1964 Parisienne is a window into Sixties Canadian motoring, when life was lived at a more relaxed pace… Words and photography: Huw Evans.

Today, in both the US and Canada, motorists drive essentially the same vehicles, yet that wasn’t always the case. Prior to the Seventies, protective trade agreements meant that, in Canada at least, a good percentage of cars and trucks sold differed from their US counterparts. Some examples of this include the unique Mercury and Fargo trucks, as well as Ford’s Meteor line, and at General Motors, vehicles such as the Acadian and Beaumont. While Pontiac was a US brand, the much smaller population base in Canada, and generally lower disposable income, meant that big, flashy models such as the Star Chief, Catalina and Bonneville made little economic sense. 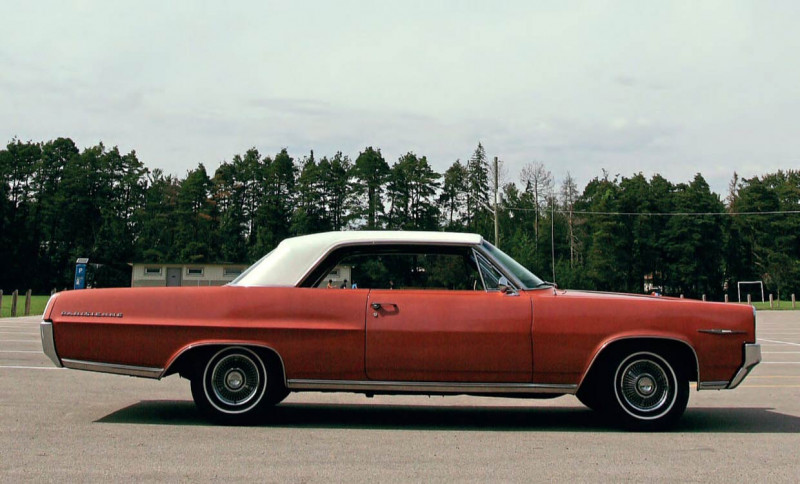 Instead, General Motors of Canada equipped local Pontiac dealers with unique full-size models that wore Pontiac sheet metal, but utilised Chevrolet chassis and running gear. The Parisienne was the top-of-the-line Pontiac sold in Canada, and began as a subseries of the Laurentian in 1958 (the Laurentian was roughly equivalent to the Catalina in the US market).

For 1959, the Parisienne became its own model and although styling mimicked the tasteful styling of that year’s full-size US Pontiacs (notably the Bonneville), the Parisienne, along with its Canadian Laurentian and Strato Chief stablemates, utilised Chevrolet’s X-frame instead of the full-perimeter chassis used on US models. It also featured standard Chevrolet suspension in place of the ‘Wide Track’ that debuted on the US models for 1959, and continued to use a full roster of Chevrolet engines. 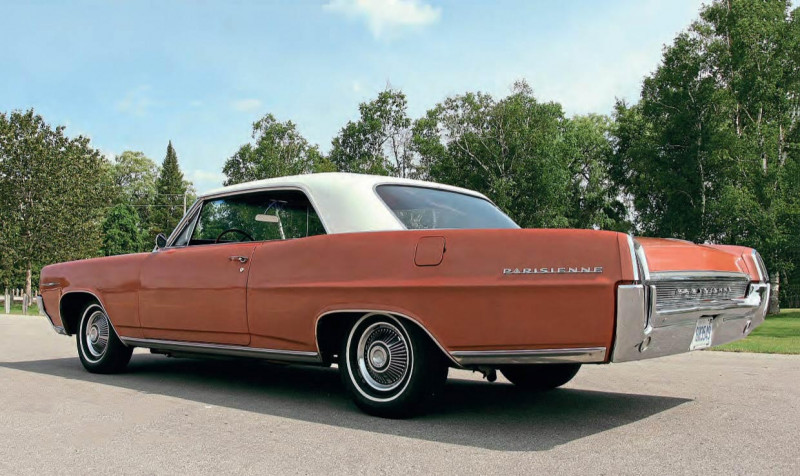 These included 230 and 250cu in inline sixes, as well as small-block 283 V8s with either two or four-barrel carburettors, up to and including the big-block 348 with single or dual-quad carburettors. By 1964, the popularity of the Parisienne and other full-size Pontiacs in Canada meant the brand placed third in sales, behind Chevrolet and Ford.

That year’s Parisienne appeared to closely mimic the US-market Bonneville in appearance, but was both shorter and narrower, with unique sheet-metal and exterior trim. A key distinctive feature was the parallel windscreen wipers that were not featured on US full-size Pontiacs that year and full wheel covers which somewhat resembled the optional eight-lug wheels and finned brake drum units optional on the likes of the Catalina and Bonneville.

For 1964, Parisiennes could be optioned with one of two Chevrolet-sourced inline sixes, either a 235 or 250cu in version; a single 283cu in V8, two 327cu in V8s and, although rarely ordered, the 409cu in big block. Transmissions comprised a standard ‘three-on-the tree’ three-speed manual, four-speed manual with floor shifter, or two-speed Powerglide automatic.

Chevrolet’s customary short/long arm coil front suspension and a coil-sprung live rear axle were attached to the 119-inch X-frame, while all Parisiennes utilised four-wheel drum brakes with a single circuit master cylinder. This particular 1964 Parsienne two-door hardtop, owned by Patty Bourgon and her son Todd, was originally ordered by a nurse in Windsor, Ontario, just across the river from Detroit.

“SHE HAD BEEN LOOKING FOR SOMETHING THAT REMINDED HER OF HER MOTHER AND SHE WANTED A CAR OF THIS ERA.”

Finished in Saddle Tan metallic with a white top and three-tone Morrokide interior, this Parisienne was also ordered with a 250cu in inline six, two-speed Powerglide automatic transmission and Motorola Reverb AM radio. The original owner purchased the car for the princely sum (in those days) of $3900 Canadian. 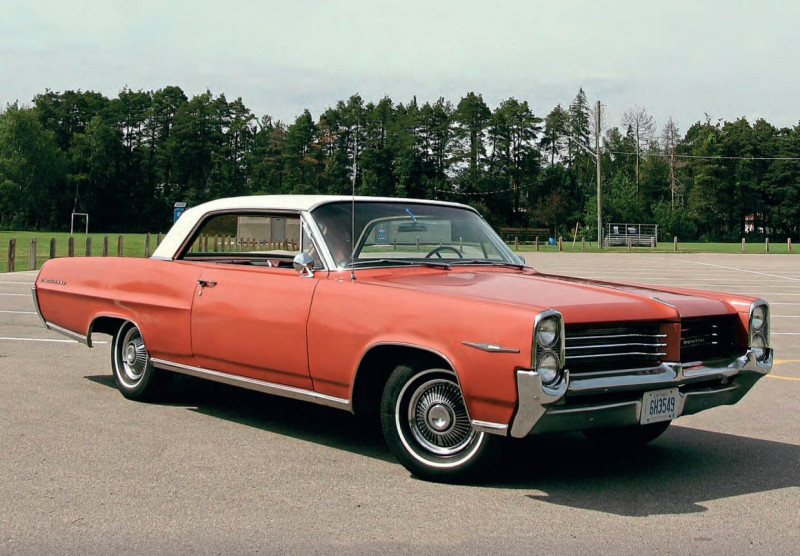 Patty Bourgon came across the Parisienne in 1999. “She had been looking for something that reminded her of her mother and she wanted a car of this era,” says son Todd. By that stage, the car was a well-kept, original survivor, though was starting to show signs of age in some areas. “The vinyl roof was replaced 15 years ago,” says Todd, “and the car was also repainted as close as possible to the original colour.” Patty resisted the temptation to add any upgrades to the Parisienne and, aside from modern radial tyres, it’s as original as it was when it rolled off the Oshawa assembly line in 1964. 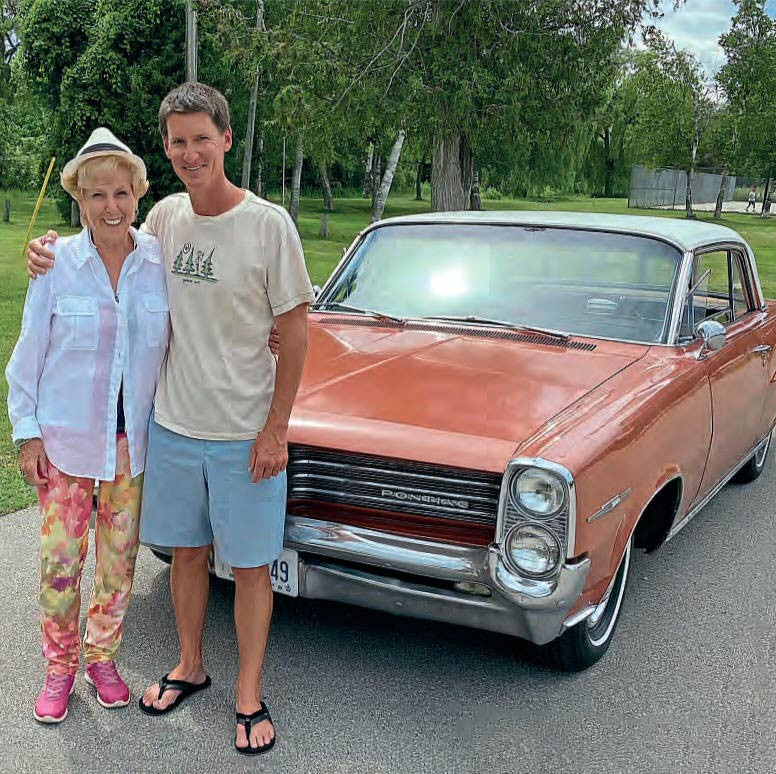 Since Todd has taken possession of the Parisienne, it’s been treated to a bit of mechanical refurbishment: “It had been sitting for quite a while, so needed new seals and the radiator needed to be replaced. The original inline-six was removed, new gaskets and a rear main seal fitted and the top end rebuilt. The engine was also resprayed in original Chevy Engine Red and detailed before being reinstalled.”

The radiator was also replaced and the brakes serviced. Todd had toyed with the idea of installing a dual-circuit brake system and master cylinder for better performance, but in the end opted to keep the original single circuit set-up. “It’s only original once,” he says. Although the Parisienne had been garage-kept, the paint had oxidised, causing the metallic finish to dull over time. 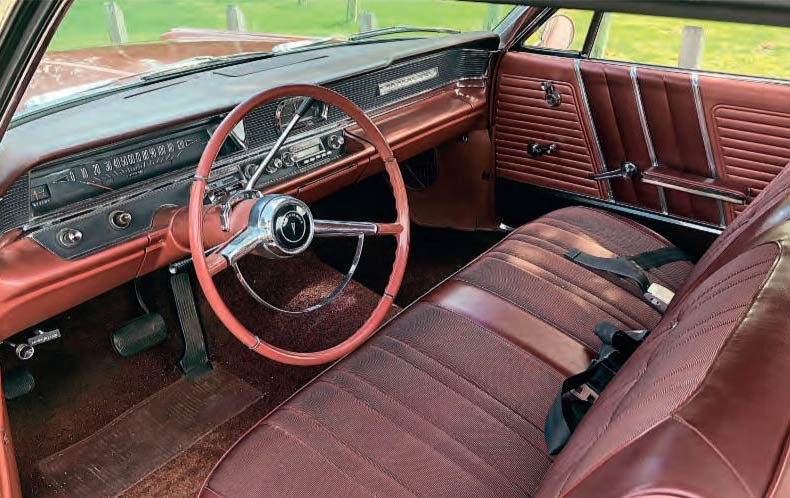 Armed with Meguiar’s three-stage paint restorer, wax and polish, Todd took a buffer to the bodywork and was amazed at the results. “I couldn’t believe how well the finish came back,” he says. “Once it was done, it looked like the car had just been painted.” Todd says he plans to keep the Parisienne and that his two teenage daughters like it. “They think it’s cool and can’t believe the size of it,” he says. “It really is from an entirely different era.”

Although with a straight-six under the hood and Powerglide automatic, the Parisienne isn’t going to set any performance records, Todd says it’s an extremely relaxing car to drive. “You do have to think ahead when you’re turning and stopping,” he says, “but it just purrs along. I remember when I picked up the car from the shop in Georgetown and drove it back home to Innisfil. My mom came along for the ride and she was smiling from ear to ear; it was a really special drive and experience.” Although the Parisienne is safely tucked in Todd’s garage, he intends to see that it does get driven regularly when both time and weather permit. “It’s not good for old cars like this to sit, they need to be driven,” he says. We couldn’t agree more.

“I REMEMBER WHEN I PICKED UP THE CAR FROM THE SHOP IN GEORGETOWN AND DROVE IT BACK HOME TO INNISFIL. MY MOM CAME ALONG FOR THE RIDE AND SHE WAS SMILING FROM EAR TO EAR...”

A new radiator was required. Relaxed cruising is the order of the day. VIN plate. Meguiar’s three-stage paint restorer, wax and polish revived the paint.

“IT HAD BEEN SITTING FOR QUITE A WHILE, SO NEEDED NEW SEALS AND THE RADIATOR NEEDED TO BE REPLACED. THE ORIGINAL INLINE-SIX WAS REMOVED, NEW GASKETS AND A REAR MAIN SEAL FITTED AND THE TOP END REBUILT.”

Proud owners: Todd and Patty Bourgon. Canadian Parisienne was shorter and narrower than its US equivalent. 250cu in inline six.

“SHE HAD BEEN LOOKING FOR SOMETHING THAT REMINDED HER OF HER MOTHER AND SHE WANTED A CAR OF THIS ERA.”