With its dazzling purple bodywork, M3 wide-body kit, period Schnitzers, and an M50 swap on ITBs under the bonnet, this stunning E30 Cab serves up everything you could possibly want from a classic 3 Series build. Words: Elizabeth de Latour. Photos: Alex Alcocer.

Sometimes you come across a car that looks so right that you just can’t take your eyes off it. A car that does everything right, that ticks all the boxes, and that makes you stop and stare, and Tom Starkey’s (@__notguilty__) E30 Cab is exactly that sort of car. Just look at it – we can’t stop because it’s so damn sexy. The paint, the wheels, the bodywork, it’s such an awesome E30 build, aggressively styled, wearing a host of period enhancements and it’s a really special car. That shouldn’t come as a surprise when you learn that Tom has been working on his E30 on and off for the past 11 years, and this is clearly a car that he’s got a deep connection with. 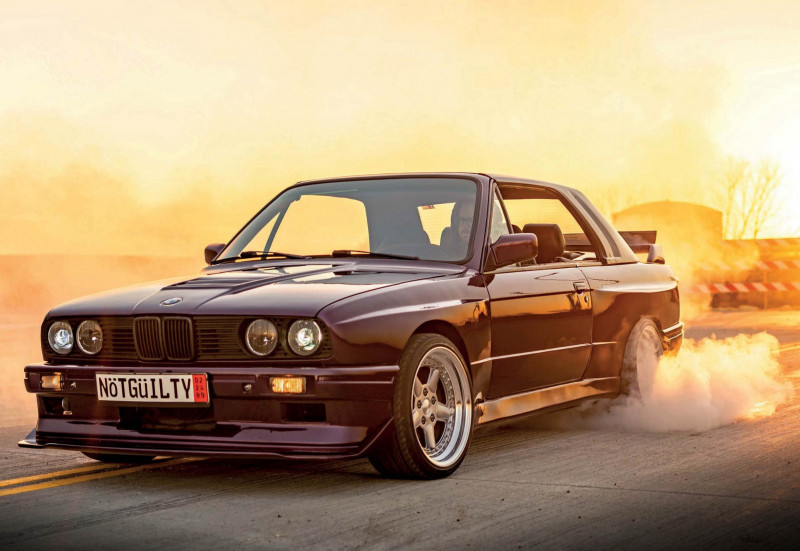 For Tom, his love of BMWs began when he first saw the Mischief series in 2004, and he kicked off his ownership experience in style with an E30. “It was a 1989 BMW 325es – I really wanted an E36 M3, but they were $25,000 then, so it was the only way I could get into a 3 series,” he explains, but any six-cylinder BM is a nice place to be, and it was a fine introduction to Bavarian motoring. You might think it was that experience that led him to own this E30, but actually, this car was a gift. “My grandmother bought it and surprised me with it when I came home from Afghanistan in 2010,” says Tom, and that’s one heck of a welcome home present, and it’s no wonder he’s formed such a close bond with it.

When the E30 entered Tom’s life, it was very much stock, but it didn’t stay that way for long, and it has changed and evolved numerous times throughout its time with him. “Back then, in 2010, I did a super eta swap with an iS head, a basic thing to do then. Then it’s just changed over the years – at one point, it had a GTX3576R turbo on it. Everything on the car front to back has been removed, replaced etc. I think the front windshield is the only thing original to the car. I started at the suspension and then worked my way up,” grins Tom, but it’s the car’s current evolution that has really hit the sweet spot. 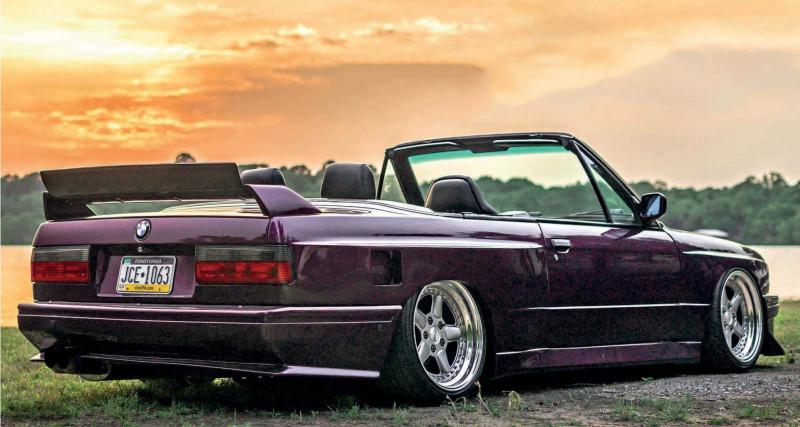 While there’s an awful lot to enjoy on this build, it is undoubtedly the exterior that gets your attention, and this is a car that demands your attention. “This is going to sound crazy, but I love the ’vert over the coupé and the sedan, but not for the drop-top,” explains Tom. “If you notice, the coupés and sedans all have a B-pillar, and the rear windows don’t roll down. With a ’vert with the factory hardtop, you lose the B-pillar, so when the windows are down, it just looks so open and clean. True classic Euro vibes from the side,” he grins.

“The M3 wide-body conversion was just pure luck. I found someone selling it complete with a full Flossmann front end. I’ve only ever seen one car with that front lip, and I had to have it. I just tried to do something different. Nowadays, everyone takes the easy road and just rivets and wraps. I grew up in the 2000s tuner scene where everything was moulded and paint-matched,” says Tom, and it shows. The M3 wide-body looks fantastic, while that Flossmann front-end looks so aggressive, as does the vented bonnet, and then you’ve got the massive DTM FiberWerkz rear wing, while the black hardtop adds a hit of contrast against that gorgeous Rolls- Royce Twilight Purple paintwork. It’s intoxicating stuff, and makes this one of the sexiest E30s we’ve seen in a while.

As stunning as the styling is, the combo of wheels and suspension also plays a big part in this car’s overall visual impact, and Tom’s knocked it out of the park with his selection. “I saw a set of ACS Type 1s back in 2003, and I’ve always had my heart set on them,” he says, so it’s no surprise to see this E30 wearing those wheels, but it’s not just any set of ACS Type 1s. These are Type 1 Racing three-piece 17s, with silver centres and polished stepped lips, and they are the perfect period wheel choice for this E30, they look so good and suit this whole build perfectly. They have been paired with an Air Lift 3H air-ride setup, which gets those fat arches dropped low over the Schnitzers, but there’s so much more going on with the chassis than just the air-ride. Tom has gone to great lengths to ensure his E30 handles properly and so, up front, you will find M3 lower control arms, Treehouse Racing thrust arm bushes, a Garagistic lower X-brace and strut brace, plus a quicker Z3 steering rack. At the rear, meanwhile, sit custom lower control arms which have been modified to DTM style with adjustable toe, there are Powerflex Black Series bushes throughout plus an M3 diff with a vented cover. The final additions are the M3 brakes front and rear, which also give this E30 a five-stud setup, as well as enhancing the stopping power to boot. This might look like a show build on the surface, but this E30 is as much about the driving experience as it is about looking good. 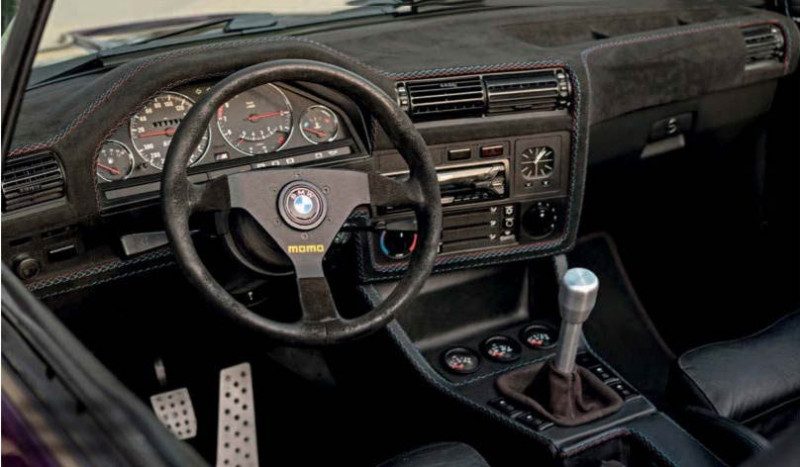 Speaking of looking good, the exterior isn’t the only area of the build that has received a lot of Tom’s attention, and the interior is no less special. “I just wanted something super clean and functional that wasn’t over the top and stayed true to the car,” he says, but that doesn’t mean he hasn’t poured a huge amount of work into the cabin. It’s the seats that get you first, E36 M3 Vaders, which don’t look out of place at all and make the interior feel more modern, and they look a whole lot more special than the standard seats.

The next thing you’ll notice is the custom dash, and it’s absolutely incredible. “It’s probably my favourite mod on the whole car,” says Tom and we’re not surprised. “The guy in Europe that did it completely killed it; it took eight months to finally get it, but I’m happy,” he says and it was absolutely worth the wait. The whole dash has been trimmed in Alcantara with M tricolour stitching, and it looks amazing.

The detail and quality are stunning, while the centre console has been trimmed in leather with matching stitching, and it makes the whole interior look so special. On top of that, you’ve got the Momo steering wheel, the beautiful aluminium gear knob with the M tricolour-stitched Alcantara gaiter and a matching Alcantara handbrake handle. And if all that wasn’t enough there’s a custom gauge cluster, with a 300km/h speedo and the wildest needle arrangement we’ve ever seen, and it’s a fitting finishing touch.

So far, no area of this car has disappointed, and that’s not about to change as we dive under the bonnet. As Tom mentioned previously, the engine bay has seen all manner of changes, from the aforementioned super eta swap and iS head not long after he got the car, to the addition of a turbo, but its current setup is more spectacular than anything that’s come before. The engine itself is a non- Vanos M50B25, a fine choice of swap, but it’s undergone a serious transformation.

It’s been equipped with a set of S50 cams and full-length exhaust manifolds, but what makes it special is the addition of a set of RHD ITBs combined with custom velocity stacks. In conjunction with the Racing Dynamics carbon engine cover and billet oil cap, plus the gold details it makes for a stunning centrepiece to this awesome build. Not only does it look good with the bonnet up, but the ITB-enhanced M50 also provides plenty of power, and it sounds absolutely incredible with it, giving this epic E30 a spine-tingling straight-six soundtrack to match those looks.

11 years is a long time to own a car, especially in a scene where owners seem to chop and change their builds every other year and are always chasing the next new project high, but Tom’s dedication to his E30 has paid off massively. He’s formed a real bond with this car, it’s been through so much with him, it’s special to him and that shows in the way he’s built it. Everything about it is just awesome – it looks spectacular on the outside and inside, the engine is sensational, and the whole build has been enhanced with countless individual touches that make it even more special and personal. Over the past 11 years this car has evolved countless times, and rather than looking to start a new build, Tom just puts all his energy into the E30, and it’s about to evolve once more. 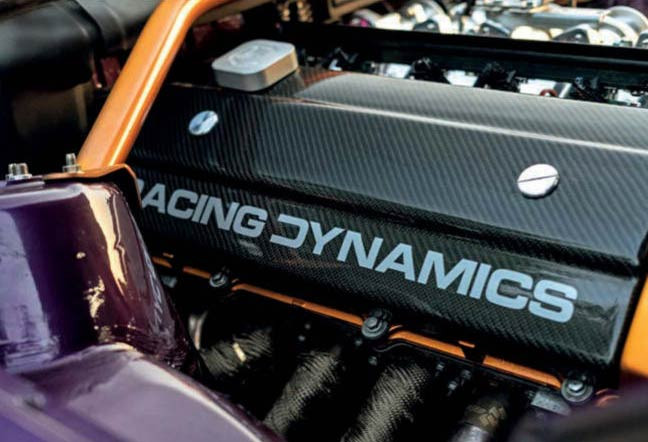 “I’m about to tear it apart down to the shell again, I’ll remove the engine and trans, and I’m going to do an LS motor swap with a turbo and a T56 transmission,” he says with a grin, and that’s going to take this already epic E30 to the next level.

Above all else, every stage of evolution has seen the car built exactly as Tom wanted at the time, with no restrictions. “Money is never something that holds back a car – it’s your drive to push yourself and skills,” he says. It’s this desire to push himself and his car that has resulted in such a spectacular build, and you just know he’s never going to stop striving to better his achievements and take his E30 further still.

“ The M3 wide-body conversion was just pure luck. I found someone selling it complete with a full Flossmann front end. I’ve only ever seen one car with that front lip, and I had to have it”

“ I love the ’vert over the coupé and the sedan, but not for the drop-top… With a ’vert with the factory hardtop, you lose the B-pillar, so when the windows are down, it just looks so open and clean. True classic Euro vibes from the side”

“ The engine itself is a non-Vanos M50B25… It’s been equipped with a set of S50 cams and full-length exhaust manifolds, but what makes it special is the addition of a set of RHD ITBs combined with custom velocity stacks”