Having owned XR2s in his youth, Doug Scheller had long fantasised about owning another. And then one day, at the age of 45, a fruity citrus hit turned the dream into reality. Words Daniel Bevis. Photos Adrian Brannan.

I wasn’t really looking for an orange car,” says Doug Scheller, “but something about this one really caught my eye.” Yes, that’d probably be the outrageous jaffa-tinged juiciness of it. It’s impressive what a difference the addition of a disco-retro paintjob can make to such a recognisable classic form, isn’t it? 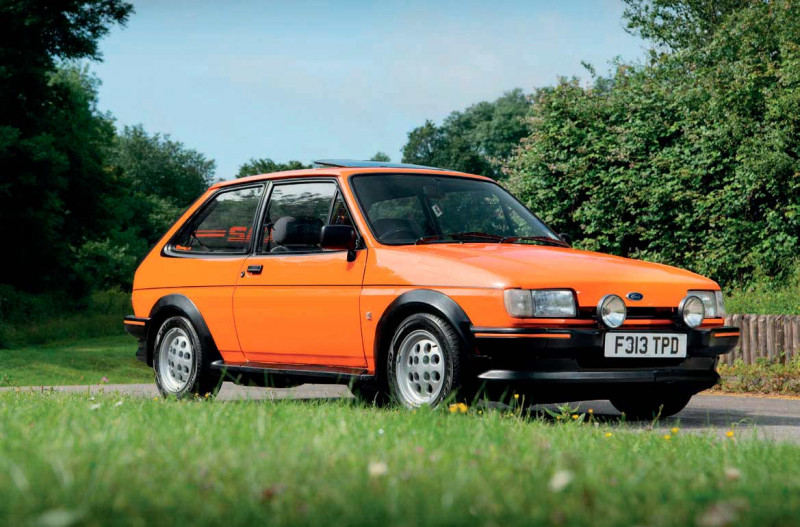 It’s a silhouette that’s always been close to Doug’s heart too, having been a die-hard Ford fan from the get-go. “My family always had Fords,” he recalls. “I remember being taken to school in my mum’s white XR3i in 1984; we also had a Mk5 Cortina, Mk3-Mk5 Escorts, Mk2 Fiestas, and my dad had a Mk2 Transit for work, so it was inevitable that I would follow the path.” Indeed, his first car was a Mk2 Fiesta 1.1 — followed by a 1988 XR2 when he reached 19 and insurance allowed.

This was in 1994, so it was only six years old at the time; before long, Doug and his best mate Nick were upgrading the cam, dampers, exhaust, audio, all those teenage dreams. Then he crashed it into an oak tree, so that was that.

“Not to be put off, I went out and picked up a white 1988 XR2 and we managed to transplant nearly everything from the old one,” Doug grins, “and again my mate Nick built everything with me passing him spanners.” He enjoyed this pocket-rocket until the turn of the millennium, at which point life began to get in the way; a company car, a variety of German dailies, and Doug found himself out of the Ford scene entirely. Happy memories of youth, nothing more. 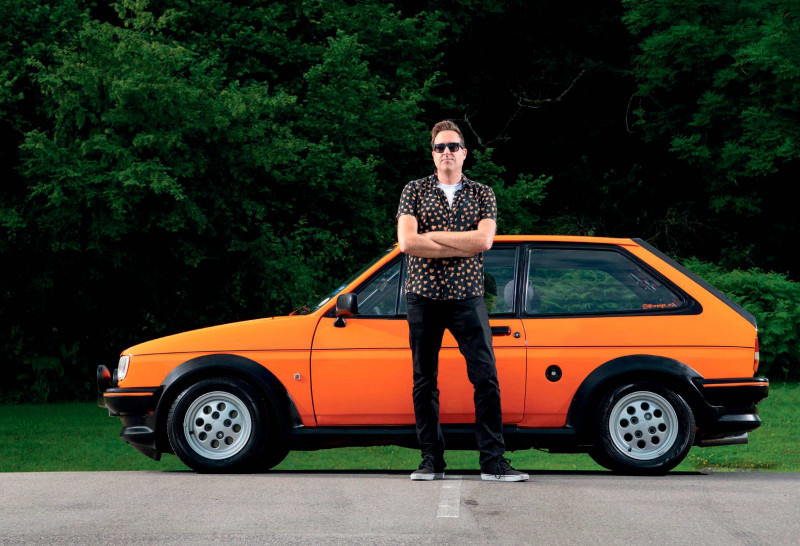 But in 2019, he had an epiphany. “I still held a torch for XR2s,” he says, “and kept thinking one day I’d get another. I’d turned 45 and could pass it off as a midlife crisis! Prices had started to really shoot up though, so I began to think I wouldn’t be able to fulfil the dream… until I saw this bright orange 1988 XR2 pop up online. It caught my eye, not just the colour but the price, which seemed very reasonable.”

The car was being sold locally to Doug in West Sussex, by a chap who’d bought it from Scotland with the aim of rallying it but had a change of heart. As is so often the case, the Fiesta looked a lot better in pictures than real life, but with buddy Nick in tow (who is by now a Ford Master Mechanic), Doug wasn’t overly daunted by the rotted-out passenger floor and frilly sills; besides, it was largely solid, and there was a set of naughty 40s hiding under the bonnet… 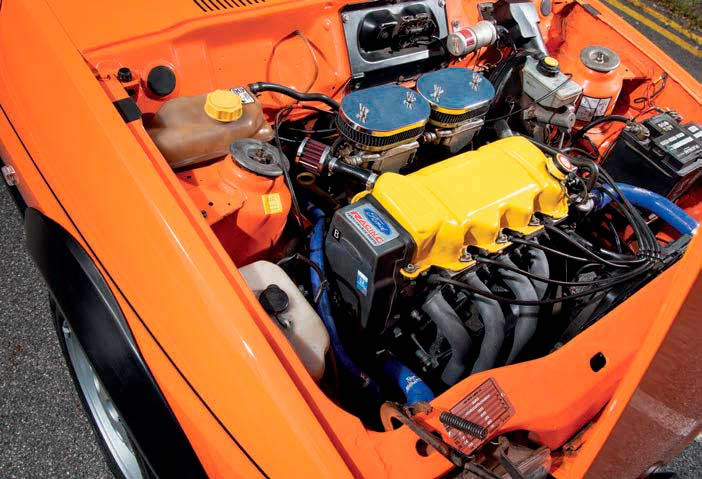 “I later found out about Iain Cowie of ICR Motorsport when I was searching for a new rear beam and came across his online store,” Doug continues. “I asked him about the ICR sticker on my rocker cover, and learned more about his old racing teams at Knockhill. He said that it could just be a rocker cover, but if the sump was gloss black and the block was painted blue it was one of his! It turned out that the engine was one of his old XR Challenge builds — small world.”

There were further racy treats in the mix when Doug brought the car home too, including some Avo coil-overs, Hi-Spec four-pot brakes, and 15 inch Borbet wheels. It made for quite a head-turner while he smoked about in it for a few months, having sorted the essential welding, but before long he was keen to really put his own stamp on the build. And someone else’s half-road-half- race creation was never going to cut it.

“Fortunately the car also came with a full set of standard suspension, plus the pepperpots, so I sold all of the old racing bits and set about getting the car back to nearer-standard,” he explains. “All the work was carried out with my good friends, Nick Kent and Jeremy Eldridge, which saw us replace pretty much all of the running gear including the rear beam, brakes, brake lines, suspension, hubs, driveshafts, and then a respray in the same Vista Orange by Jaime at Auto Colourworx in Cowfold. The great thing about the XR2 is that you can still pick up a lot of parts, and dedicated people like Shane Baker (SB Parts) are fabricating pretty much everything you could need — and with clubs like the XROC you can find most of what you require.” 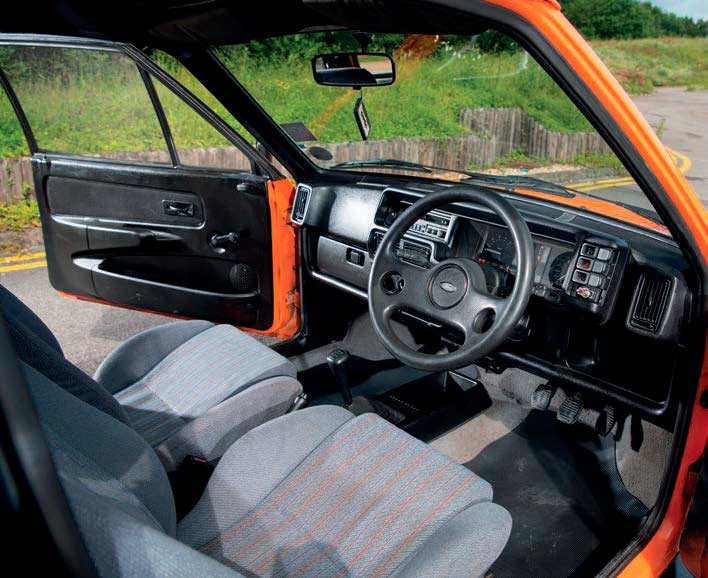 Having friends who are handy at slinging spanners is a definite plus as well, and there’s something of the old-timey adventure about the process of stalking through the to-do list; finding someone able to balance carbs isn’t as easy as it used to be, so this requires a little lateral thinking. And for the big stuff, Doug jumped in with both feet by buying a terminally rotten XR2, which can live on by donating all of its hard-to-find interior parts to the orange ’1988.

The chassis specs today are a lot closer to the way Ford intended, although it’s been upgraded where it counts to cope with the snorting fury of that old-school race motor; KYB dampers and lowering springs get the pepperpots tucked in snug, while an Orbital Motorsport adjustable Panhard rod keeps it honest. The XR2 gearbox has been rebuilt and treated to a Puma gear linkage and short-shift, and the engine was recently set up on the rolling road at Road & Race of Horley, yielding 120bhp thanks to its Kent CVH22 cam, big-bore exhaust system and twin Weber 40 DCNFs. 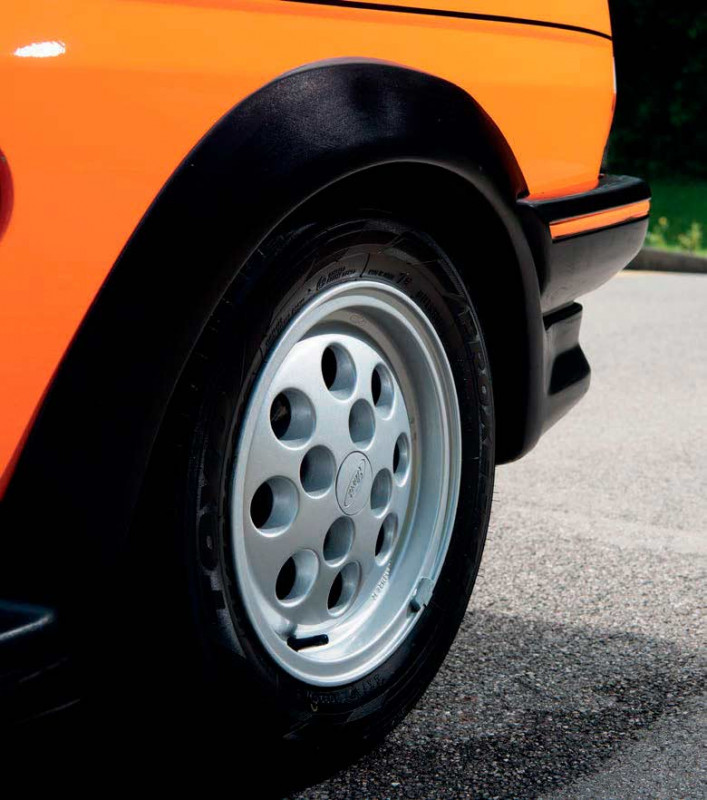 “I really just want to drive it as much as possible now,” Doug enthuses. “It does live in the garage but I don’t believe in SORN for the winter, I like to drive the car all year round. I’ve been at shows at Goodwood, and I’m a member of the XROC so I’ll be attending as many local meets as possible. To be honest, with a bright orange XR2 every fill-up at the petrol station is a mini car show! People always stop and talk about it. And I wasn’t planning on keeping it orange, but it’s really grown on me.”

It’s interesting how the XR2’s most visible characteristic has become its defining feature, and wrapped Doug up in its charms. He didn’t plan to buy an orange car, and then he didn’t intend to keep it that way, but the citrus hue is such an important part of the Fiesta’s personality. Its ultra-bright nature really helps it to stand out, and Doug’s been making all sorts of friends and contacts, both through the XROC and via Instagram (where he can be found at @orange_xr2). After all these years away from XR2s he’s jumped back in with both feet – his own interpretation of what the ultimate Fiesta should be. His teenage self would be very impressed. 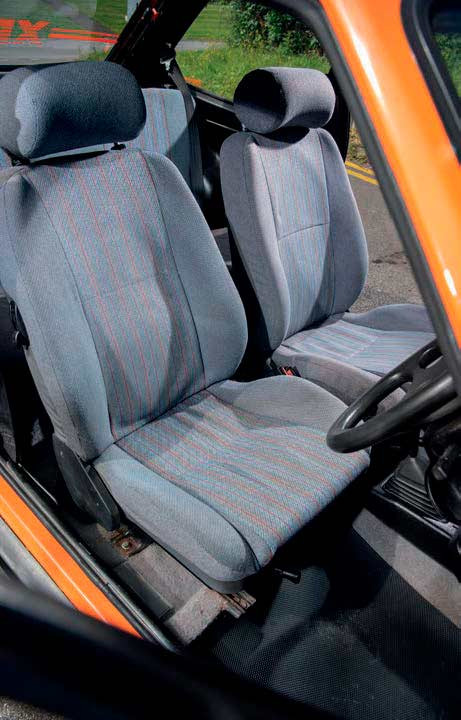 Doug’s efforts to trace the XR2’s history yielded some interesting results. “It seems that it started life in Germany in 1988,” he says. “I assume it was owned by a member of the Forces, as a lot of 1980s cars were exported and re-imported at this time and enjoyed some good savings. It was then first registered back in the UK in 1989. The original paint was white, but it’s undergone three colour changes according to the online history I could find: from white it was painted grey, then black, and finally orange. The car spent most of its life in Scotland, and I found out where it was first restored and painted orange about 10 years ago. I’d love to know more, but it’s very hard to track old owners down these days — and this car has had 18 of them!”