We recall driving the Stelvio Q – the car that put the ‘sport’ into Sport Utility Vehicle – at the Balocco test track in Italy. Story by Roberto Giordanelli. Photography by Michael Ward.

The top-of-the-range Alfa Romeo Stelvio Quadrifoglio parked in the Silverstone paddock costs £93,000. It is a 510bhp, two-tonne rocket ship that will blast you from zero to 62mph in 3.8 seconds and peak at 176mph. 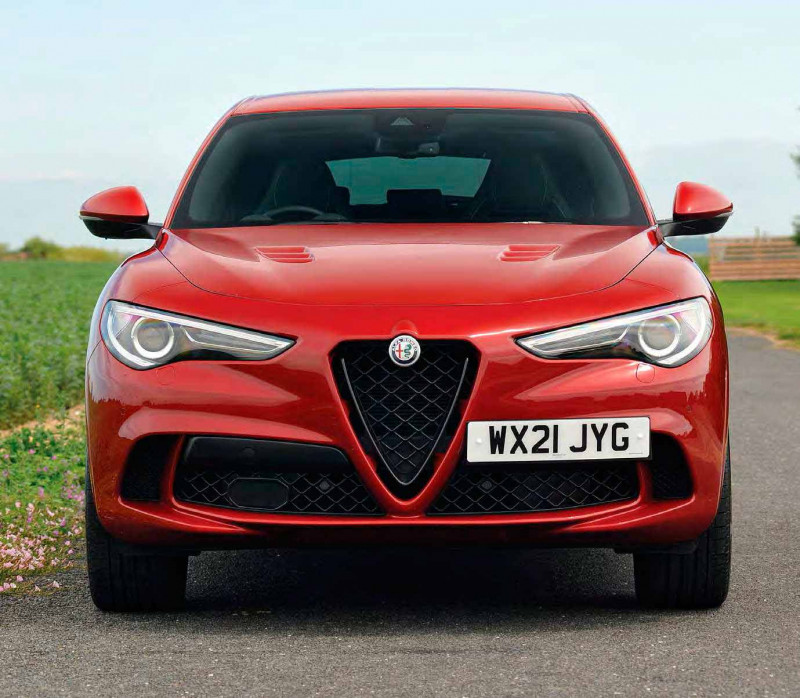 Alfa Romeo was late to the SUV party when it launched the Stelvio in 2016. I recall going to Alfa Romeo’s massive proving ground at Balocco and testing the Stelvio Quadrifoglio there. Balocco covers a staggering 1200 acres and has 40 miles of track. I was whizzing around the track perched high in a Stelvio (named after an Alpine pass). It was like driving a very fast and decent handling sports car, except that it was quiet and comfy, which always helps to mask your actual velocity. Getting used to vast speeds, a tight, narrow, slow corner loomed. This is where the laws of physics came into play. Stopping two tonnes of fast-moving metal from over 100mph down to walking speed is much more difficult than stopping one tonne’s worth. Still driving with a sports car mentality, it became apparent that the Stelvio refused to stop and turn like a Caterham. While the brakes were up to the task, the Stelvio — and indeed all SUVs — have a limiting factor in that there are only four rubber contact patches with which to grasp the tarmac. It didn’t do a bad job, but it ran wide onto a run-off area.

So what does all this mean? Absolutely nothing. No SUV buyer will care about any of this. People buy SUVs for several reasons, but handling like a racing car isn’t one of them. SUVs don’t handle as well as ‘normal’ cars. For SUV haters, they are more likely to roll over, take up too much space and block your vision when following one. For SUV lovers, they are safer than a little low-down car, more comfortable, more practical and better for forward visibility.

As to whether the Stelvio is any good, yes it is. It has won countless awards. Many buyers choose a car simply by the badge. Brand awareness matters. There are buyers who will only buy German SUVs. There are those who couldn’t care less about the brand and will opt for budget SUVs. Wealthy extroverts will go for the top-end of the market. The Stelvio Tipo 949 will be the SUV of choice for the more genteel and style conscious.

“Driving with a sports car mentality, it didn’t do a bad job, but it ran wide onto a run-off area ”