The Carrera 3.2 Targa remains an affordable entry point to ownership of an air-cooled 911 and, with a careful and considered approach to Porsche personalisation, can be transformed into the perfect everyday Porsche. What’s more, this one can be yours… Words Robert Smith. Photography Dan Sherwood.

Anyone who has stripped an old Porsche knows to expect the unexpected. For example, hidden corrosion waiting to be uncovered is hardly unusual when evaluating the condition of an air-cooled 911 in advance of restoration.

And, as we find time and again, many metalwork repairs carried out back when the value of these cars hit rock bottom leave a lot to be desired. Plenty of owners simply couldn’t justify spending big bucks on a car worth nowhere near what you’d need to budget to find your name on the logbook of an air-cooled 911 today, leaving today’s custodians of these Porsches to deal with a legacy of bodges. Take the stunning 1984 Carrera 3.2 Targa on these pages. Imported from the USA in 2017 and bought by its owner from a UK-based 911 dealer advertising the black beauty as a tidy vehicle “needing a little work” in advance of a return to the road, subsequent strip-down at classic car restoration outfit, Workshop Seventy7, revealed an empty can of Sprite had been split open and used to patch an inner sill. 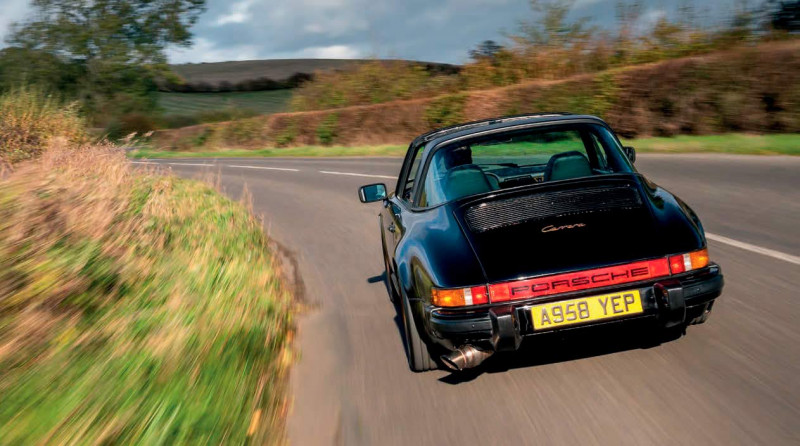 “We could more or less date the work to the mid-1990s by the logo and graphics printed on the can,” laughs company boss, David Lane. As far as crude repair work is concerned, this is definitely one that’ll stick in the mind for a long time to come, but it’s important for us to state it wasn’t indicative of the car’s overall condition, which offered a great starting point for a full recommission, a fact made clear by the accompanying big box of paperwork outlining regular servicing and preventative maintenance carried out at the instruction of the original and previous owner. Finished in solid black, wearing a whale tail, staggered Fuchs five-leaves and optioned with Sports-specification ‘tombstones’ and a limited-slip differential, the semi-open-top 911 was the perfect foundation on which David and his team could build, resulting in the tip-top Targa we’re enjoying at Workshop Seventy7’s Northamptonshire base today. 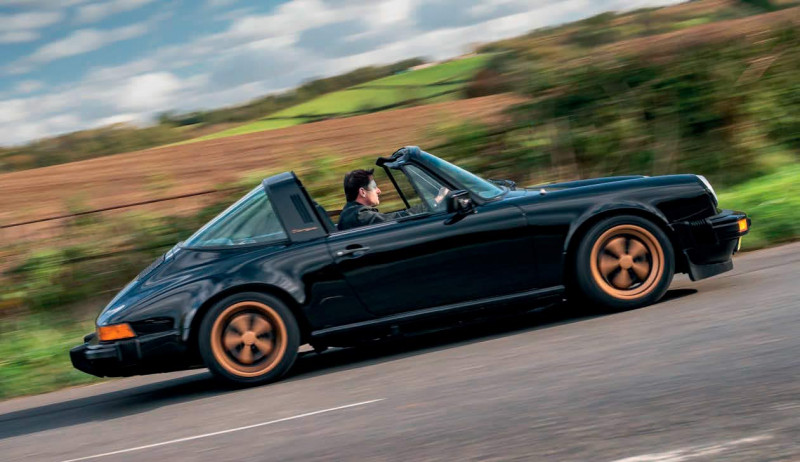 As many of you will be able to relate to, the original plan of action was for the car to be treated to a refresh of its mechanical components, with repairs undertaken as required. From then on, the car’s proud owner planned to simply drive and enjoy his new Porsche. As work began, however, it became obvious areas of the car previously uninspected were in need of attention. “It was counterproductive to spend time overhauling the engine and transmission and not do a proper job of cutting out the corrosion discovered along the way,” David says, not unreasonably. Save for the surprise find of the drinks can, the car was in really good shape, with nothing out of the ordinary to report in terms of rust. “New kidney bowls and fresh inner and outer sills were required as is typical of a Porsche of this age, but otherwise, the body was in really good shape.” 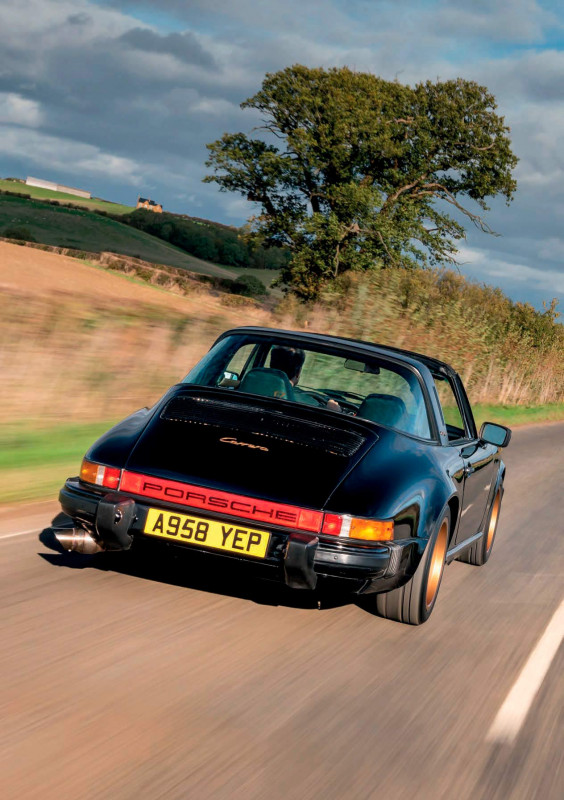 “It’s a real hoot on the motorway at full chat. The thing is, this is a left-hand-drive 911 now residing in the UK. The tailpipe is on the left and, when you’re driving along narrow British streets, the boom from the pulse chamber bounces off brickwork and even hedgerow, making the sound even louder that it would be in the USA during normal driving conditions. We decided to take the unit apart and install different wadding and tubes to give the car a little more refinement. There’s no noticeable drop in power and this Targa still sounds awesome, but the owner can now drive without drawing too much attention to himself.” 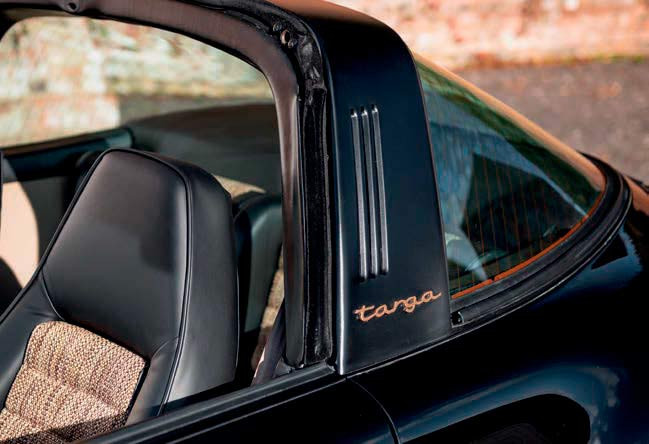 Personalisation of this Porsche took place at the same time, with the whale tail replaced by a more subtle lightweight flat engine lid. “The changes made to the car took place in a very organic way,” he recalls. “As we were working through each stage of the project, the owner would present ideas for updating and improving his 911 in tasteful fashion. The gold and black colour scheme, for instance, dictated the finish of the wheels, as well as a full retrim of the interior, including seats, door cards, handles and all new carpet, extending to the front luggage area. Obviously, we replaced window seals and the Targa hoop gaskets at the same time, ensuring the beautifully stitched Tweed-like fabric didn’t suffer water damage as consequence of the kind of moisture ingress these cars are renowned for. I’m pleased to report this is a completely leak-free cabin!”

It’s also one making use of a MOMO Heritage Prototipo steering wheel and modern entertainment equipment, including a Continental retro-look head unit and Focal speakers, installed at the point of full rewiring. What certainly isn’t modern is the radar scanner mounted in the centre console. Situated above the oh-so-1980s cassette storage drawers, the unit features two settings: one for ‘highway’ mode, the other for ‘city’ driving.

Launched in late 1983 by American electronics firm, Cincinnati Microwave, this compact “radar warning receiver” contains circuitry permitting it to detect and indicate the presence of both X-band and K-band police radar signals. Redundant today, it’s a neat fit in the 911’s cockpit and has been kept in place as a nod to this Porsche’s Stateside past. 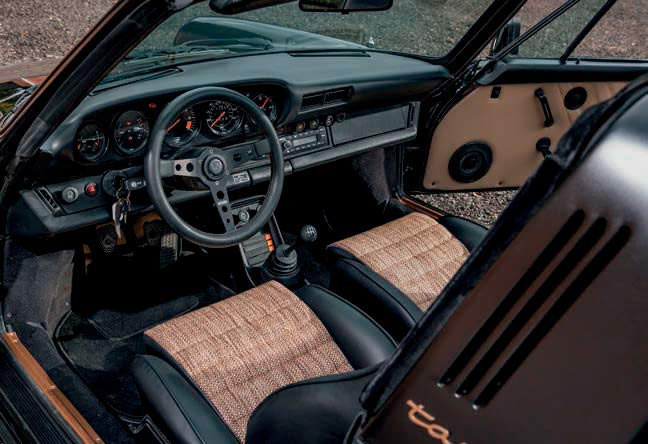 The suspension was upgraded with new Bilstein shock absorbers, rubbers and mounts, before the car was sent to esteemed chassis tuning specialist, Chris Franklin, at Warwickshire-based Center Gravity, a company celebrated for positively transforming Porsches of all ages to suit the driving style of their owners, as well as to dial-in modifications, thereby optimising the host car’s handling. Suffice to say, this “little rocket ship” (as Chris refers to it) can now tackle corners as confidently as it takes off from a standing start. Understandably, the brakes were overhauled in accordance with the enhanced performance.

“As time went on, this Targa became far more of a restoration than the recommissioning project it was intended to be,” David reflects, looking back on the work his team presided over. “This is now a super-sorted air-cooled 911 afforded a huge amount of attention and, crucially, is both structurally and mechanically sound. Importantly, it retains its original 3.2-litre engine and Type 915 gearbox, both operating as new and propelling a Porsche treated to a full glass-out respray.” The individual styling has been applied with sympathy to the age of the car and trends popular at the point of production, with the introduction of incidental modernday electrical equipment assisting with navigating modern traffic. Speaking of which, the car’s cruise control system works a treat.

“This is a really genuine Carrera 3.2, having had thousands upon thousands spent in all the right places and hundreds of man-hours invested at specialists dedicated to getting the condition of the car to where it is now,” David adds, acknowledging the owner’s determination to make his terrific Targa the best it can be. In fact, he found the process so involving and so hugely rewarding, he’s lining up his next Porsche project already. “This car will have to make way for the new build,” David reveals. “Interested parties should give me a call. This is a superb air-cooled Porsche, a wonderful modern-classic to add to any garage and, above all, it’s ready to be used without any required remedial work.” Better days are coming, so Jimmy Cliff sang, and enjoying them from behind the wheel of this restored and lightly modified Carrera 3.2 Targa is a very tempting proposition indeed. 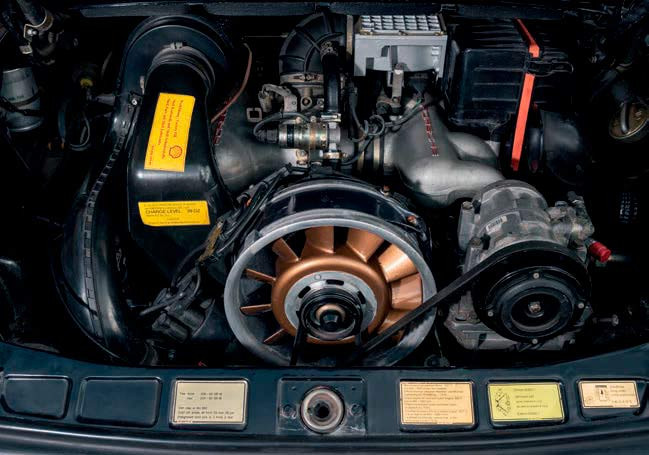 Below Bisimoto pulse chamber has been quietened, while Escort radar detector is an early 1980s throwback.

Above There are few classic 911 driving experiences as satisfying as a Targa on the open road with roof removed.

Above 3.2-litre flat-six is original to the car and has been thoroughly rebuilt

Below Tweed-style interior continues the aesthetic

Above Black with gold accents is an age-old winning combination and looks fantastic on this Targa. Below Retro-look head unit provides modern radio connectivity, though the sound of the blaring flat-six is all the soundtrack we’d need