What is an early E-type like to use on a regular basis and can the flaws of the day be seen as charms today? Jim Patten swaps his 4.2 roadster for a 3.8 with a roof for a road trip. Words & Photography: Jim Patten. 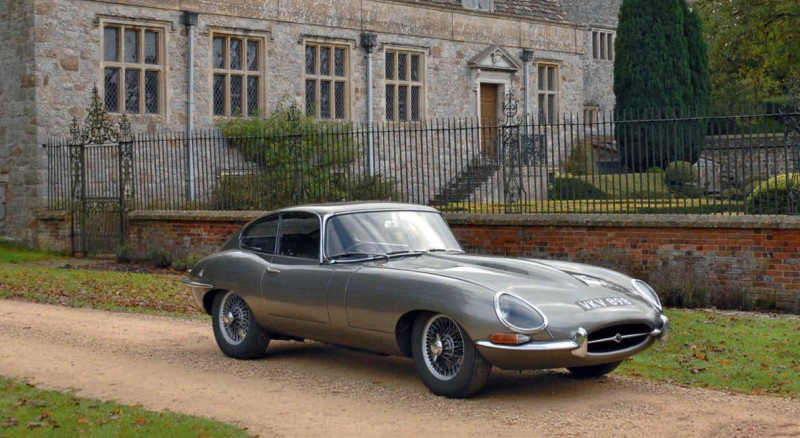 Frost covered the links of the Oxfordshire Spa hotel as an early sun picked out the glistening beauty of the land. Winter was approaching, not the ideal time to be touring in an E-type. And yet it could prove to be the best time of all with stunning landscapes and little used roads to enjoy. There’s an incredible arrogance directed to classic cars as devices of irregular performance and doubtful reliability, safe only on the shortest of distances. Judging by the tiny mileages covered by many it must be true! Film director, Matthew Whiteman has never subscribed to this philosophy and as features elsewhere in these pages testify, neither do we! His 3.8 fixed head E-type had been his only car for the first 25-years of his 30-year ownership. When we spoke of a possible touring feature, being the good chum that he is, he volunteered his car immediately.

“Drift out, sight the bend and power through safe in the knowledge that the road ahead was clear.”

Our E-type for the trip is a ’62 fixed head, original right down to its correct aluminium radiator, submerged fuel pump, dynamo and of course the much-maligned Moss gearbox. It is so original that the battery polarity remains positive earth, meaning we couldn’t plug in our Satnav -hope the Garmin has decent batteries! Finished in original gunmetal, it has the rare match of grey interior, the combination as stunning as it is beautiful. The patina exquisite and achingly right, so preferable to a glossed up over-restored glitz-mobile. Amusingly, the correct engine number for this 3.8, is R3838-8. 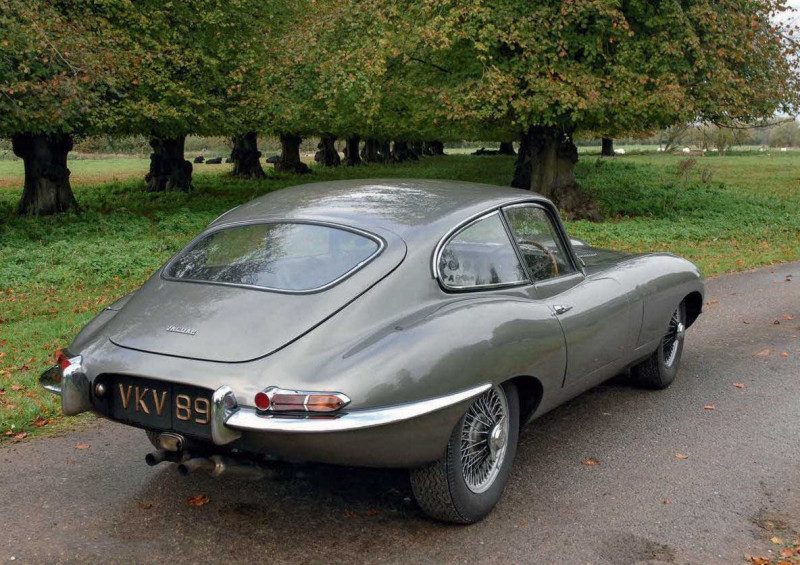 “The whole motion of cornering, acceleration and braking became one fluid action.”

There was the basis of a plan; I wanted to see Avebury and the standing stones, then there was a jaunt to Dorset to catch up with friends and we had been promising to visit Oxford for some while. So that’s a trip then. From Matthew’s Oxfordshire home I filled with Esso’s finest and sought deserted lanes, my destination Laycock Village in Wiltshire.

Taking the smaller roads, I wiggled through to cross the M40 on the A329 and using a circuitous route trod the A415 to reach the A338, an old Roman Road. This long straight road was perfect E-type country, and I detected a slight flex on the original woodrim steering wheel as the acceleration pulled me back in the seat. By hanging a right at East Hanney I was back on the lanes again working my way to the B4507, pausing to walk the Vale of the White Horse and the legendary cut in the chalk hills at Uffington. I was alone and the day cold but clear, perfect for this winter stroll.

I’d eased into the E-type as if it had been mine for 20-years, not Matthew’s. So far, I’d been driving on small roads where the blistering acceleration proved its worth overtaking tractors or doddering hatchbacks. It made a nonsense of some modern performance cars too and I’d yet to really get going. I hadn’t felt this relaxed for ages and simply relished the twisting lanes. Drift out, sight the bend and power through safe in the knowledge that the road ahead was clear. I was still on the small roads but needed to make up time so taking the A420, skirting Swindon, I hit the M4, blissfully free running. The E-type magic still worked and as it was spotted in the various rear-view mirrors, cars moved aside. At speed, it proved extremely stable although I got nowhere near the 135mph mark where the E is supposed to pick up an under-draught. At junction 16, I joined the A4361 to make Lacock village. The epitome of an English hamlet, it has been a setting for film and TV since 1958, with recent appearances including His Dark Materials, Dr Thorne, Harry Potter, Galavant, The Other Boleyn Girl, Cranford and Pride and Prejudice. Tourists wandered, but it was far from over-run.

My first overnight stop was just outside Avebury, where I chatted to some young foreign female visitors, extolling the merits of the E-type. The following day, I had a quick tour of the Avebury Ring and the standing stones. It is a fascinating site with English Heritage having guardianship but managed by the National Trust. There’s an incredible feeling around the stones as the ghosts of the past almost seep out of them. A group of 21st century Druids were paying homage to the site, so I left them in peace.

That night I was due to collect my wife Karen at Poole station for an overnight with friends Andrew and Fran Marsh. But I wanted to savour the drive so used the A360, fast yet curvy. I took a detour on the A344 to the A303 just to see Stonehenge from the road. I’d been visiting the site since a child and was pleased that I enjoyed those uncomplicated days of being able to climb on the monument, but fully understand and support the protection now afforded to another National Treasure. Using the A345 towards Salisbury, I resisted the urge to walk Old Sarum and say hi to the guys at Burlen Fuel Systems in the same stretch of road, I took the ring road to blitz the A30. Busy Salisbury traffic soon thinned, and the E-type was back in its stride.

Braking for bends there was a slight asthmatic sigh as the bellows brake booster assisted pedal pressure to the Dunlop calipers. I didn’t notice the extra bit of muscle needed, the brakes uncomplaining and hauling the car up impressively. We were really bonding now with the car virtually reacting to my thoughts. The whole motion of cornering, acceleration and braking became one fluid action. Just before Shaftesbury I turned off driving parallel to the A350, driving through the Abbas’ of Melbury and Compton cutting through Cranborne Chase to join the A350 and on to Poole station to scoop up Karen and then on to Andrew and Fran for a wonderful – if boozy – night. There was time to re-acquaint myself with Andrew’s Healey 100 and XJ8 he bought from the estate of Les Ely. It was tempting to linger but we were on a mission and had the miles to enjoy. We did a quick visit to another National Trust house, Kingston Lacy, where an extremely kind parking official allocated a special place for the E-type – it engenders that sort of warmth. Then Karen sorted a fabulous cross-country route leaving the Badbury Rings and back towards Oxford.

PUTTING THE E IN OXFORD

Most of the route became a blur to me as I was guided through the edge of the New Forest passing chocolate box villages. There was no easy route, so we just enjoyed the journey for its own sake. As we neared Thame and the Oxfordshire Spa hotel, our base for next three days, tantalising visits appeared. We were too late for the Wyld Court Rainforest on the B4009 while Rycott Chapel had closed for the season. I’m not keen on booking ahead – who knows what you might arrive to — but the Oxfordshire didn’t disappoint. The views across the countryside were stunning, especially from a window table at breakfast. With no interest in golf, we did try the Spa, taking a swim each day and experiencing the most delicious massage.

It was good to have a base for a while and although the E-type was left in the car park each night, it started first time every morning, despite the frosts. It would be impossible to drive into Oxford, so we used the nearby park and drive. Of course, I was apprehensive – somebody else’s precious possession and I was just going to abandon it in a very public car park. Oxford proved everything we thought, especially the Ashmolean Museum where the Tokyo, Art & Photography exhibition and Dante Arts (we missed the after hours event) captivated us.

There was far too much to see in a day, so Oxford has joined our extensive re-visit list. By the time we’d travelled less-travelled local roads and dropped the E-type back to Matthew, we’d stacked up close to 1,000-miles. In that time, it hadn’t missed a beat. All of those much-feared components like standard ignition, shock absorbers and cooling, just got on with their job and gave no cause for worry. Neither did they impair the experience or impress by their ‘charm’. The car was simply efficient, doing the job it was intended for.

I didn’t even give ‘that Moss gearbox’ a second thought. There had been sunshine and rain but most of all there was the cold. But the heater worked extremely well and at no time did we have reason to complain. The performance remained mightily impressive, and while other modern contenders’ squabble over the King of the road moniker, I doubt that any could command the considerable respect of this old warrior. That the E-type continues to deliver prodigious performance giving little away to modern traffic, must be the ultimate accolade of a model entering its 60th year. We’re used to attention paid to the cars we regularly drove in the past — the XK120, ‘Mk1’ and even the S1 XJ6 all turned heads. But none comes close to the utter adoration that the E-type provokes. Wherever I stopped, crowds gathered. It was like dropping a magnet in the centre of a pile of pins. Old ladies experienced temporary liberation, children squealed with delight, grown men cried with passion, while the girls flirted in a most un-PC way. Best of all, everyone smiled. No malice, no jealousy just the joy of the moment. I’d seen some of the finest historical sites the area has to offer but surely the E-type has to join them as one of our National Treasures.

Our unending thanks go to Matthew Whiteman for the loan of his E-type. Details of places visited can be seen on: www.nationaltrust.org.uk and www.english-heritage.org.uk Hotel: https://www.theoxfordshire.com

With a change of lifestyle, involving a move to a country smallholding that absorbs much of his time, Matthew has very sensibly concluded that his E-type does not get the attention it deserves. Narrow rural lanes, muddy so much of the year, prohibit much of the fast A road driving that was once so much of his life with the car. Now having to subscribe to the school of mere custodian, Matthew accepts that it should be sold on to a more suitable home. This represents a rare opportunity to buy an original, unmolested E-type, ready to give many years of service and endearing pleasure. Contact Matthew Whiteman on: kinomatto@gmail.com

Accept the rain – it’ll bother you more than it does the car… Above: Don’t try this in a roadster! Luggage, laptop, cameras and cleaning gear were all absorbed through the tailgate Below: Not another car passed during this shot. Below: In company with the Marsh Healey 100 Bottom: The mansion at Avebury.

First stop at Lacock Village National Trust Take the rough with the smooth, pre-frost winter can be a wonderful time to tour Kingston Lacy where the house gave shelter from torrential rain. The Avebury stones