Poland’s new Supercar Club allows members to drive a broad range of hot metal, including a certain four-door coupe from the AMG stable that has been tuned to the maximum by Brabus

It may call Poland home, but the Supercar Club has plans to go global – we try its GT-based Brabus 800

In the car park underneath Warsaw’s Hilton Hotel there is an eclectic and rather special collection of cars. At first glance, it’s hard to imagine why a Mazda MX-5 is parked next to a Porsche Taycan Turbo S, or a Ferrari F8 Spider is near a Mitsubishi Evo X, but these are not the tucked-away possessions of a multi-millionaire with highly varied taste. They belong to a special club: Supercar Club. One of its founders, Kamil Dlutko, explains that everything on display, from the humble MX-5 to the newest Lamborghini, offers a unique driving experience for discerning club members. And ‘driving experience’ is the raison d’être of Supercar Club. 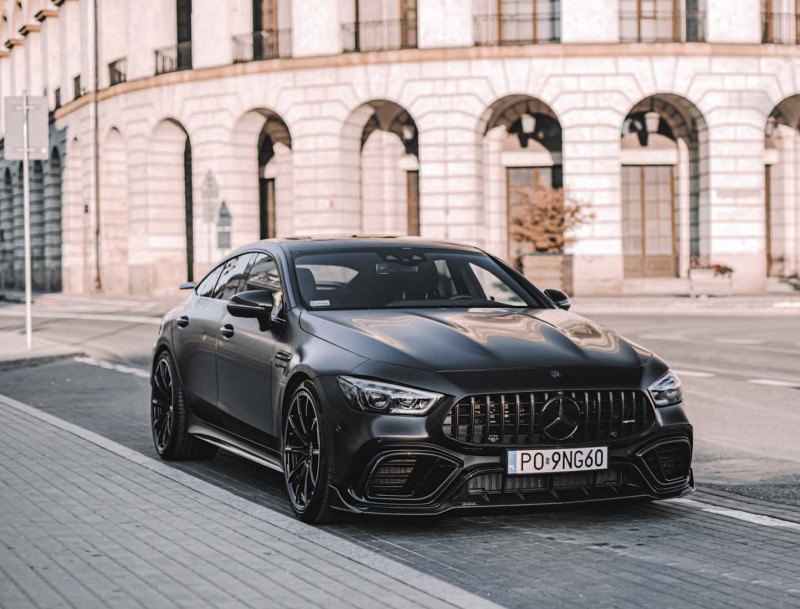 The club came together nearly 10 years ago out of a group of guys who loved driving fast cars, and kept buying more… and eventually had so many they began wondering how they could stop losing so much money on storage, insurance and servicing. The spark that coalesced the idea into a going concern was an advert in a UK magazine about a time-sharing club for supercar owners. “We thought it would be a great idea to bring this concept to Poland and so we began putting our own cars into the business,” Kamil explains. With some healthy investment from Krzysztof Hołowczyc, Poland’s own ex-European Rally Championship winner and Dakar driver, things have taken off in a big way. Now, after amassing an impressive 50 of the most desirable cars in the world, the club is ready to go global. 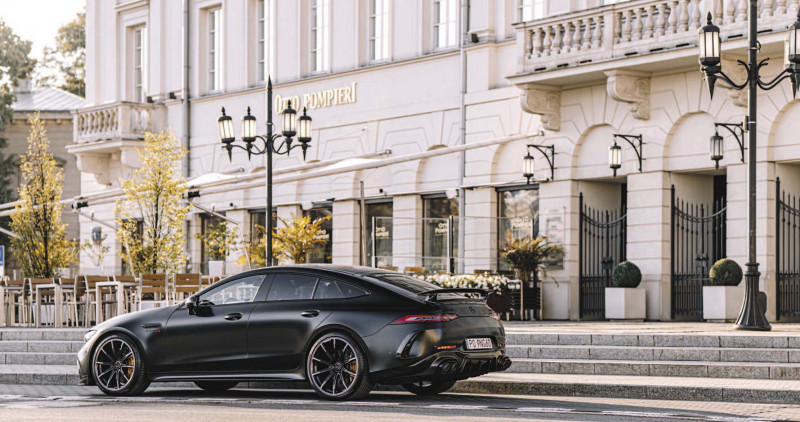 After handing over a subscription fee and passing an advanced driving course specific to each car you want to enjoy, you are welcome to take anything in the extensive catalogue out for a drive. The list currently includes beauties such as a 992-series Porsche 911 GT3, Chevrolet Corvette C8, several top line Ferraris and an Aston Martin Vanquish, but is being added to all the time.

Out of its extensive inventory there are several appealing Mercedes options to choose from including a GT C, GT S and G63, which have to be considered staples for any discerning fan of three-pointed stars. The company even has an AMG A45 S, suggesting it is prepared to think outside the box. However, for us at Mercedes Enthusiast, the stunning matte black Brabus 800 grabbed our attention. 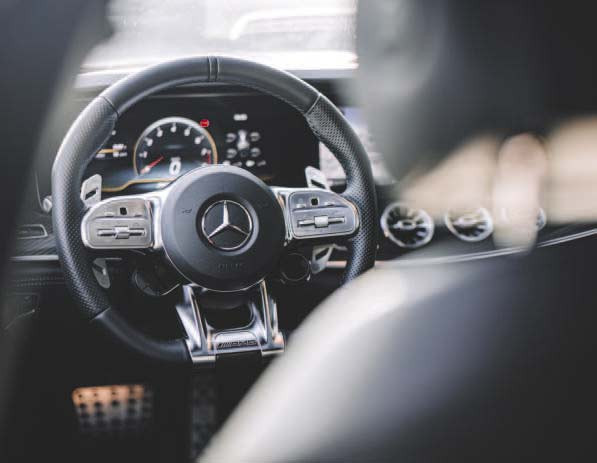 The car on which this road weapon is based, the AMG GT63 S 4-Door Coupe, is certainly no slouch. With a time of 7min 27.8sec around the Nürburgring Nordschleife, it once held the lap record for luxury sedans on the testing 13-mile circuit, something that was of course promoted widely by the company at the time. But with an extra 160bhp over the GT63 S’s already pretty significant 630bhp, the Brabus leaves the ‘standard’ AMG far behind, although their top speeds are the same, as the 800 is pegged at 196mph.

With the historic city of Warsaw serving as our backdrop, we couldn’t wait to take this monster for a spin. We went out in a few cars that evening, the aforementioned Ferrari F8, a 996 Porsche GT3 and some others. The other cars all felt like supercars from behind the wheel. With everything designed to be sparse and sporty, their cabins screamed ‘hard core’. The Brabus 800, on the other hand, is different. The dashboard is so big it overflows into the arm supports and features two screens lit up like the Blackpool Illuminations with subtle neon blues oozing out from behind the buttons, vents and speakers. It feels more like you’re at the controls of a spaceship.

Once in the driver’s seat, the first thing you should do is adjust the active side supports that press into your ribs like a bouncer shoving you sideways out of a night club. This feature is appealing to some, but having the seat change into an uncomfortable shape mid-corner can be distracting.

Outwardly, the Brabus looks nowhere as extreme as the Ferraris or Lamborghinis and while in convoy with the others, all eyes, and quite a few phone cameras, were on the Ferrari. But put your foot down in the 800 and you are never going to be disappointed. As a bystander, you naturally expect a Ferrari to shoot away, but watching the big Brabus do it always inspires disbelief. The Ferrari is like a well-trained sprinter coming out of the blocks. The Brabus is like a bear bursting out of the bushes. “It’s pure power!” Kamil smiles. “With a time of 2.9 seconds, no rear-wheel drive supercar can beat it to 62mph. But it’s a four-door sedan with big back seats, so to look at, your brain says it shouldn’t be able to do that. But that’s what 1,000Nm [737lb ft] of torque does for you!”

The city centre, with its traffic lights and cobbled streets, feels a little restrictive for such powerful speed freaks, as you can only put your foot down for literally a split second before the twin-turbo four-litre V8 has propelled you beyond the speed limit. So to get a better understanding of what this car can do, we asked Kamil where he thinks the mighty 800 fits into the line-up. As Kamil is the man in charge of a garage full of supercars, and who teaches Supercar Club clients how to drive the Brabus properly, his opinion is worth something. “The size and well-designed aero make it excellent on the road, and the fact that it is an all-wheel-drive car gives it supreme traction. The way Brabus has engineered the suspension means that when you’re driving the GT properly it doesn’t feel its size. And when I say it’s big, the thing hardly fits in its lane but the wide track means that its high speed stability is amazing. It’s like a gecko!”

Kamil loves the sound of the turbo pop-off valve, which reminds him of a Dodge Demon, and he’s addicted to the incredible sound from the big bore exhaust, but there are no gimmicks on the 800. “It’s a special car,” he nods.

Another great way to experience the car’s full potential is the Supercar Club’s newest venture, and one most relevant to international clients. The company now offers guided supercar tours around some of the most picturesque parts of Europe. The Alps and Croatia in autumn were the inaugural adventures, but they weren’t simply ‘follow your leader trips’, as on the week-long driving holiday, members got behind the wheel of a different car every day: a Ferrari Roma for Monday, a Lamborghini Huracán for Tuesday, an Aston Martin Vantage for Wednesday… “We’ll stay in the best hotels, of course,” Kamil says, “But we’ll also visit some special places like private car collections that aren’t normally open for visitors.”

Another significant advantage that Supercar Club has over a simple supercar rental is that all the routes it treats members to have been thoroughly researched. They comprise among the most drivable roads in Europe and take in stunning mountain ranges with minimal risk of damage to the cars. “This is important because we have just spent a couple of weeks in Switzerland and Italy, and only about one in 10 of the roads we tried were suitable for these types of cars,” Kamil explains.

The benefits of being a member of Supercar Club don’t stop there. Perhaps you’re thinking about buying a Brabus 800, but at £257,000 you’d like to make an informed decision based on proper seat time while comparing it to other cars. Or, as Kamil points out, owners of suitable cars could offer them to the collection so that it could make money instead of being tucked away unused. “This is a dynamic project which keeps evolving, reflecting our members’ changing expectations and ideas. It’s a very exciting time to be involved with the performance car scene in Poland,” he adds. Supercar Club members can also suggest new acquisitions, road trips and routes, satisfied in the knowledge this novel form of automotive time-sharing is less expensive than the traditional rental model. Count us in!

Upgraded turbos and 1.6bar of boost pressure. Brabus’ PowerXtra B40S- 800 package. Lots of buttons to play with on the centre console. Huge intakes keep that modded V8 biturbo cool. Club members have over 50 cars to choose from. The GT handles like a car half its size (and weight). AMG-spec wheel with Brabus paddleshifters.

With the historic city of Warsaw serving as our backdrop, we couldn’t wait to take this monster for a spin