A brand-new electric classic Mustang that’s built in the UK? Now this we have to see! We sent Zack Stiling to find out about this remarkable car that’s on sale now from Charge Cars, London.

There are a number of companies around at the moment which are eager to convince us that electric conversions of classic cars are ‘the future’. They may be one possible future, but it’s one quite a number of enthusiasts would prefer not to see. 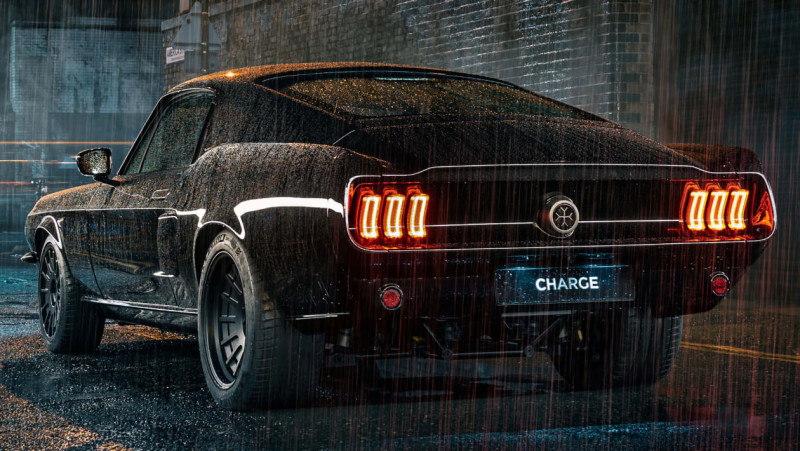 Anyone with an instinct for historical preservation will appreciate that when a car’s powertrain is ripped out and replaced with something modern, it loses half its historical value. Then there’s the question of whether clean, quiet and obsequiously obedient modern electric motors can ever match the sensations one gets from old-fashioned internal combustion, with its unique sounds and smells, and the reassuringly solid feel of old gearboxes and brakes, and even the odd rebellious malfunction. Perhaps that’s horses for courses, but your author knows his preference. What, then, are we to make of the new Electric Mustang from Charge Cars? Surely it’s sacrilege, swapping a pulsating small-block for a battery pack? Chief creative officer Mark Roberts understands our concerns because he’s an enthusiast himself. Although he’s always worked at the cutting edge of modern car design, first with Lotus and then McLaren, on his days off he can be found at VHRA events behind the wheel of his ’29 and ’39 Fords. “Don’t worry,” he reassures me, “no internal combustion engines were harmed in the making of this car!” That’s because this ’67 Mustang isn’t actually a ’67 Mustang at all. It’s a brand-new car. I had to do a double-take when I spoke to Roberts at Salon Privé London, where the Charge Mustang made its world début on April 21. Ford is supplying Charge Cars with brand-new ’67 Mustang body shells shipped over from America. Charge, a Middlesex-based company founded in 2016, then combines them with proprietary software and hardware technologies (if you understand all that) by British company Arrival, which is scheduled to have its own electric delivery van in production later this year. The first prototype, modelled on Eleanor from the 2000 remake of Gone in 60 Seconds, was shown at the 2019 Goodwood Festival of Speed. The new design modelled on a stock 1967 Mustang is better looking, and the Salon Privé launch car represents how it will look when production begins. Arrival’s modular battery technology provides 63kWh of power. And, while the body shell is steel, all the other panels are lightweight composite, which Charge tells us gives the Mustang ‘greater performance, range and efficiency, making it suitable as a daily driver’. Official figures claim a 200-mile range and a brisk 0-60mph time of 3.9 seconds. It’s also four-wheel drive, thanks to two motors under the bonnet and two in the rear subframe, driving each wheel independently. Although the ’67 Mustang is one of the archetypal American classic cars, the fact that Arrival’s factory is in Britain and final assembly will take place in the Charge works near Heathrow means that the Charge Mustang is a surprising addition to the ranks of Anglo-American hybrids which includes Railtons, Allards, ACs, Jensens and the Sunbeam Tiger. Only this time round, it’s British engineering in an American skin.

The engineering is one thing, but what is perhaps most impressive and praiseworthy is that Charge has managed to overcome three or four decades of interfering safety legislation which has obstructed car design and brought about the rise of homogenous road-going jellies. It wasn’t a walk in the park; the new Electric Mustang incorporates an integrated front crash structure, structural door bars and strengthened A-pillars, not to mention ABS, traction control, adaptive cruise control, forward collision warning, autonomous emergency braking, lane departure warning and torque vectoring in order to satisfy our bureaucracies, but we can hardly resent the fact that the end result is extra-safe yet still genuinely very handsome. Externally, the differences between the original Mustang and its descendant are at the same time obvious but very subtle. Apart from the modern 14-spoke wheels and anodised aluminium brightwork, the only other noticeable alterations are modern door mirrors and lights, flush-fitting door handles and the removal of the vents from the rear pillars.

The minimalist theme continues into the interior where the original Mustang’s instrument cluster and centre console, beautiful though they are, are now obviously redundant. Charge has cleaned it all up, leaving you with digital instrumentation and a touchscreen interface.

Considering how many songs have been written about Mustangs over the years, a sound system is pretty important and Charge gives you a good one, with eight speakers and a DVC subwoofer. At the moment, there’s a choice of four trim options incorporating seven colours. Modern Classic ‘captures the spirit of ’67 with a clean, Modernist approach’, giving you a choice of Jet Black or Arctic White Pearl paint, paired with pebble-grain leather upholstery emulating the original Mustang interior.

The Dynamic finish in Premium Ink Blue satin paint is a ‘bold, ultra-futuristic statement inspired by extreme sports’. It features contrasting colours and unconventional materials including a full non-leather interior. The Lux option, in Premium Gold satin or Premium Fire Red Metallic is ‘influenced by high-end couture’ with semi-Aniline leathers highlighted with distinctive details. Lastly, the Thoroughbred, in Bespoke Liquid Metal or Bullitt-inspired Premium Classic Green Metallic, ‘represents individual freedom and plays on that rebellious spirit’ and features a full-Aniline interior with an emphasis on craftsmanship. All cars have Jet Black satin-finish wheels. It all sounds very good, but for one thing – prices start at £350,000. That, and a limited production run of 499 cars. Although production won’t get under way until later in the year, a number of orders have been placed and Roberts says a typical sale price, after customers have added options, is £410,000 to £420,000.

So, at the moment, for most of us it’s not a viable alternative to the dull family cars we’ve begrudgingly taken ownership of, but that’s beside the point. For the last 30 or 40 years, beauty and style have been largely absent from mainstream car design. While the Charge Mustang currently has a supercar price tag, it should have an everyday practicality. What matters is that Charge has invested the time and money in overcoming the obstacles that have kept cars from being pleasant, and the result is something that many enthusiasts would be genuinely happy to own. We can only hope that, over time, the technology that’s made it possible can be refined so that it filters into the mainstream.

It’s worth remembering that electric cars themselves were once dismissed as billionaires’ pipe dreams, but are now increasingly common and from 2030 will be virtually unavoidable. Since the petrol and diesel ban is unlikely to be repealed, firm adherents to internal combustion had better work for the uptake of a viable alternative fuel or else lobby for special exemptions for low-volume combustion-engined cars (exemptions which ought to apply to continuation classics to make them road legal). Until then, though, the Charge Mustang is probably the best thing that can happen, providing the perfect compromise between classic style and modern technology. It gets better because, after the Mustang, Charge is looking to revive other classic models, but strictly as all-new cars and without harming any original survivors. Admittedly, it’s going to take a lot more than that before I’m persuaded to give up my 60-year-old day-to-day car, but if I had to pull back my curtains in the morning and look at the Charge Mustang on my driveway, I believe it would still put a smile on my face.

The production run will be limited to 499 cars.Interiors boast premium materials… ...with a variety of options for buyers.

Fuel filler for looks only. A British-built electric Mustang is a world first and is bound to catch the attention of the motoring press globally.Ford is supplying the body shells. Traditional gauges are replaced with a touchscreen. Range is 200 miles.

The new Electric Mustang from London-based Charge Cars wowed crowds at the recent Salon Privé event at the Royal Hospital Chelsea when it made its global premier. The Electric Mustang is a hand-built, zero emissions version of the iconic 1967 Fastback Mustang adored by car fans all over the world. Using cutting- edge technology, coupled to a new steel bodyshell and composite body panels to minimise weight, the Electric Mustang’s quad-motor configuration provides 536 bhp, which serves up a 0-62 mph time of just 3.9 seconds. The project even comes complete with the blessing of Ford. Originally shown as a prototype in 2019, the production-intent version of the Electric Mustang is the culmination of six years’ work for Charge Cars, and the Salon Privé London event at the end of April was the first opportunity for the public to see the finished car and understand the bespoke options available. Prices will depend on the exact spec of each hand-built car, but don’t expect to see much change from £350,000!