Ford Heritage: The Mk1 Granada Coupe was Ford’s archetypal 1970s luxury tourer. And with a stellar resto and a few special touches, this South African survivor is a fine example of the breed.

It’s the wood trim that really draws you in, enchanting you with its complex swirls and mesmeric waves. Look closely and it starts to feel irresistible, like a Magic Eye picture in the 1990s. Sure, the Daytona Yellow paint outside is a strong hook, but the psychedelic timber really is something else. 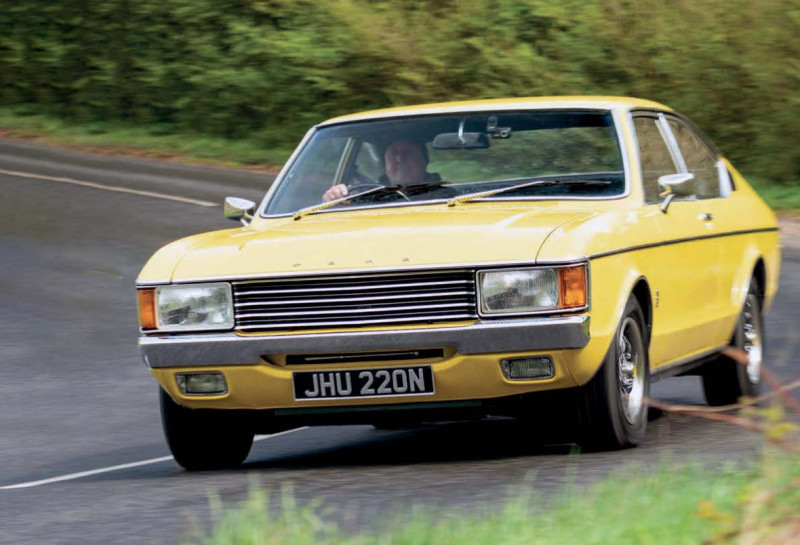 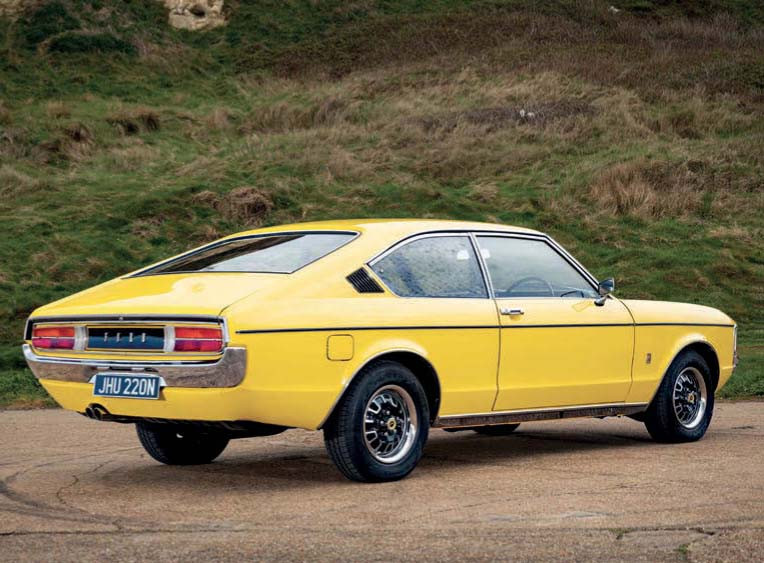 “THE FACT THAT THE CAR WAS AN AUTO WAS ATTRACTIVE, AS I LOVE THAT FOR THE EASE OF DRIVING”

This is the sort of eye-catching specialness that a Granada Coupe really deserves. After all, as magnificent as the mainstream saloon version is — and we really do love a big bruising four-door Granny — the act of scything out the rear doors and smoothing down the tail created something improbably rakish. It’s almost like a US-market Galaxie or Australian Falcon that’s been scaled down to fit on European roads. Is it unfair to call it a mullet-on-wheels, business up front and party in the back? It’s certainly this ingrained sense of playfulness that attracted Tony Ridpath to acquire this 1975 Ford Granada Coupe 3.0-litre XL Mk1.

“IT GETS PLENTY OF ATTENTION, WITH WAVES, TOOTS AND COMMENTS AT TRAFFIC LIGHTS”

“I have been messing around with cars since I could drive,” he reasons, “and I’ve owned a few good old classics — mostly Fords.” Why specifically a sleek two-door Granada this time? “I just love the shape,” he shrugs, and that’s as good a justification as anyone could need.

“I found this car on eBay,” he continues, “and it had already been imported from South Africa to the UK.” This is a particularly interesting detail, as the idea of bringing over classic Fords from that part of the world is quite an attractive notion: after all, they’ve spent their lives in a largely dry and warm environment, meaning that the one thing which usually kills off old Fords (you know what we’re talking about here) really isn’t that much of an issue in general. There is a flipside to this, however: while the bodies may be pleasingly solid, the interiors tend to be irretrievably sunburnt if the car in question has spent its life outside. A bit of a mixed bag then, but Tony was happy to investigate the situation and see what was what.

“The car was in need of a lot of TLC when I bought it back in early 2020,” he says. “I took my mate Ribbo — who helps to run the Granada Guild — with me to help check it out prior to purchase. There was a fair bit of work to be done but it was a fundamentally good car, so I went for it. The fact that it was an auto was attractive, as I love that for the ease of driving and my wife prefers it, too. And I immediately had a few plans for things I could upgrade and improve along the way. I never keep a car standard!” 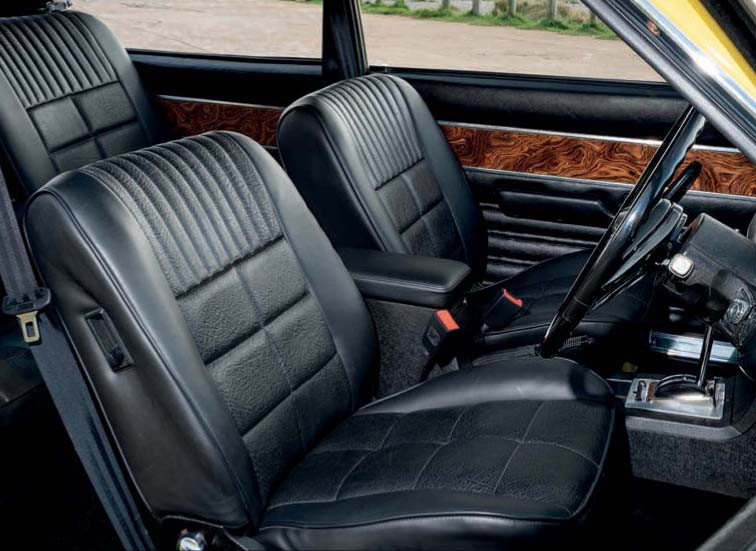 All of this has been carried out with the utmost sympathy, as you can see; Tony’s approach was one of thorough and fastidious restoration with a few of his own personal touches sprinkled about the place. Buying the car just a couple of weeks before the first Covid lockdown was certainly an interesting piece of timing, and it’s fair to say he wasn’t just gazing through the window and dreaming about driving the Coupe — Tony rolled up his sleeves and got stuck in.

“Due to it being a South African car, the inside was well and truly roasted and falling apart,” he recalls. “But big thanks to my friend Justin, who recovered the seats and fitted the new headlining. I did the rest! It’s been fully retrimmed in black-on-black, with new carpets and parcel shelf, plus real wood trim, a Mk2 centre console and new-old-stock period 1970s radio-cassette.” 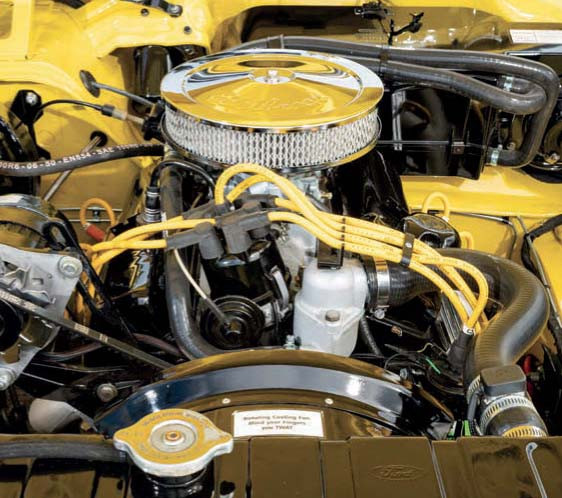 The exterior has been treated to a similarly comprehensive spruce-up; while the shell was fundamentally solid, it’s enjoyed a full respray in Daytona Yellow — which, pleasingly, was the Granada’s original colour from new. The respray included the engine bay, and this is an area which has received rather a lot of special attention, with Tony painstakingly detailing it all. “The 3-litre Essex V6 has been rebuilt, and a full bespoke stainless steel exhaust system fitted,” he says. “There’s a new carburettor, and I had the radiator recored; I relocated the battery to the boot, had the heater box refurbished and painted, and had the petrol tank cleaned out and resprayed with a new sender unit fitted.”

The to-do list was quite a long one, and Tony was keen to ensure that everything was done properly; further tasks included fitting a bespoke belly pan, re-routing and hiding all of the wiring and fuses, fitting new brake lines throughout which have also been re-routed and obscured from view, and fitting a new brake booster and master cylinder. The steering is now converted to PAS with all new hydraulic hoses, and the belt-and-braces approach is completed by treating the chassis to all new callipers, discs, pads, lines, bearings, and basically everything else Tony could think of. “I acquired a set of five 14 inch Sport steels, the originals being the hubcap version,” he says. “I had these shotblasted, and then I primed and painted them, fitting new stainless steel beauty rings, new tyres and new wheel nuts. All of the exterior trim has been refurbished and polished too, by myself and my friend Steve (aka Spider). I found some new-old-stock headlights, indicators and spotlights, but the one thing I haven’t yet managed to source is some proper South African-spec taillight clusters, so if anyone has any then get in touch!”

It’s an ongoing project, with Tony eagerly awaiting the fitment of a new windscreen, and the next thing on the to-do list being to overhaul the diff with new bearings and driveshafts. But for now, the dream is essentially complete: a spick-and-span example of a rare-groove classic, beautifully restored and sporting just enough custom ideas to really make the build his own. “It gets a hell of a lot of attention at shows,” Tony beams, “and on the road we get plenty of thumbs-ups, waves, toots, and comments at the traffic lights.” Well yes, it’s a bright sunshiney car, isn’t it? Spreading waves of banana-yellow positivity wherever it goes, its occupants’ cockles warmed by the trippy wooden swirls within.

Thanks to: the Ford Granada Mk1 & Mk2 Drivers’ Guild (ford-granadaguild.org.uk).

THE GRANADA IN SOUTH AFRICA

When the Mk1 Granada was introduced to South Africa in late 1972, it found itself in a market rich in global culture. Its role was to replace two models in Ford’s line-up: one was the 20M Taunus, a car more usually associated with the German market, and the other was the Australian-built Falcon, which was badged as a Fairmont in South Africa. Basil Green and Perana are probably the names that spring to mind for most enthusiasts when they think of Granada Coupes in South Africa, as the act of shoehorning in a 302ci Windsor V8 created something of an icon — but the fact of the matter is that most South African Grannies were just like the one you see here: a 3-litre V6 under the bonnet, with fancy XL or GXL trim. 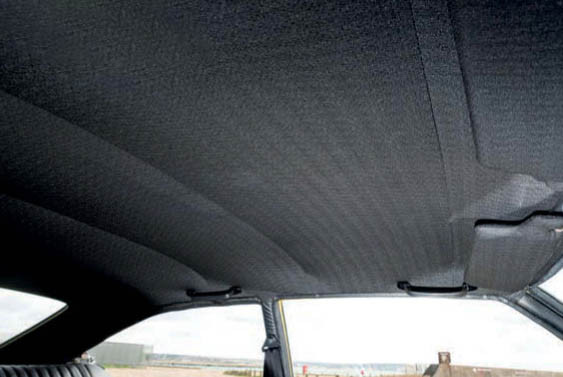 UK-spec rear lights will be replaced with correct

South African ones — when Tony can find some.Original plain steels were swapped with 14

The wood is real, and almost psychedelic! New headlining superbly fitted by Tony’s friend, James. 3-litre V6 has been fully rebuilt and the original radiator wisely recored. Being a South African car, the interior was in a poor way so Tony’s had it retrimmed in black, keeping the correct biscuit seat pattern