First seen mixing it with drab English metal during the Automobile Association’s celebratory Cavalcade of Motoring in 1955, this recently restored right-hand drive 356 Pre-A Cabriolet was one of the first Porsches sold in the United Kingdom...

Did you catch any of the Queen’s Platinum Jubilee celebrations across the first weekend of June? Regardless of whether you’re a monarchist or believe in ‘citizens, not subjects’, there’s no denying the extraordinary spectacle generated by the procession of eye-popping carnival floats on parade along The Mall (the stretch of road in Westminster between Buckingham Palace and Admiralty Arch at Trafalgar Square). This rolling exhibition of bright colours, loud sound and vibrant imagery was the result of dedication and hard work from many different organisations and community groups, each doing their best to represent aspects of life experienced across the United Kingdom and the Commonwealth during Her Madge’s seventy-year reign. 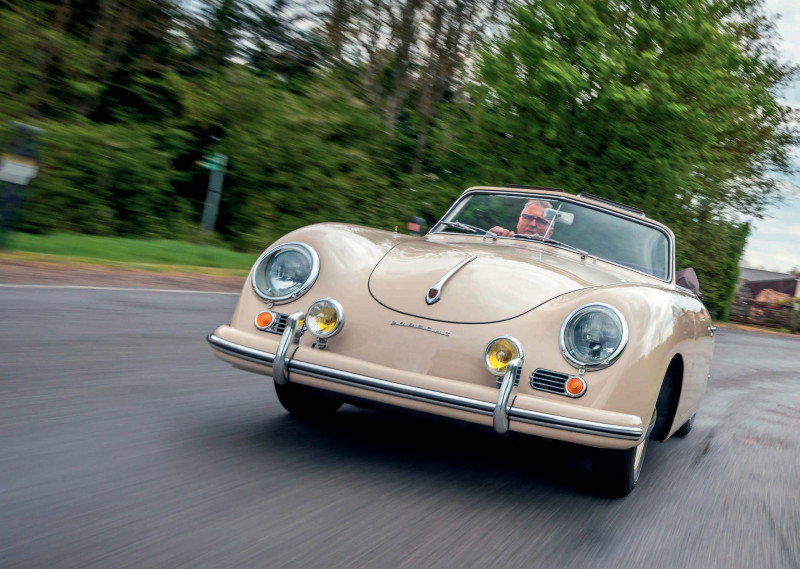 In the post-war years, this frenzied feast of colour would have been almost beyond imagination. We only have to look back to the Automobile Association’s Golden Jubilee pageant on 23rd June 1955 — less than two years after the Queen’s coronation — to see a train of black-on-black vehicles strutting their stuff along the roads in and around Regent’s Park in honour of the occasion. Wolsleys, Commers, vintage Vauxhalls and bull-nosed offerings from Morris were chief among the many dozens of cars on display, each presented for the perusal of the gathered masses and the beady eye of the Duke of Edinburgh, who was joined by Automobile Association executives for an inspection of patrolmen and their motorcycles, as well as the flotilla of cars journeying single-file around the ‘jewel in the crown’ of London’s park spaces. 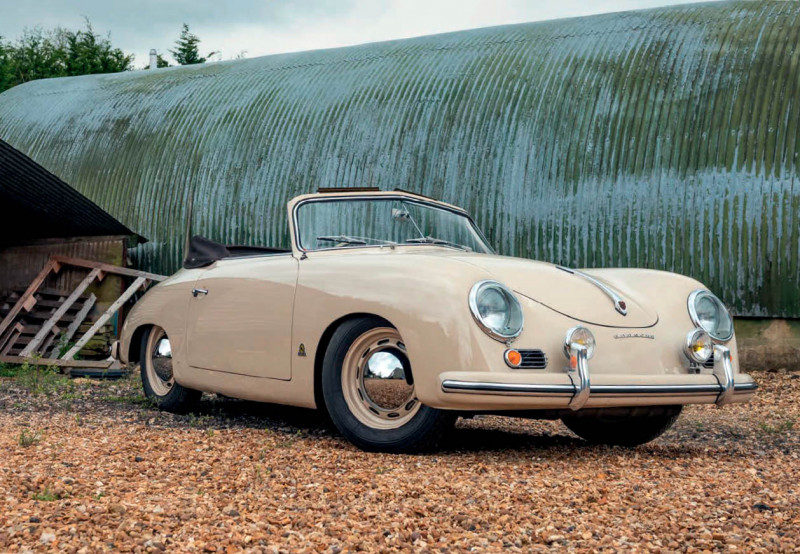 But wait! What’s this? Among the decidedly monotone motors making their way along the celebration route in front of many thousands of spectators is a vehicle altogether otherworldly. Low-slung, roofless and possessing the kind of curves the chugging Austins and Rovers in attendance can only dream of possessing is something event organisers are referring to as a ‘Porsche’. It is, in fact, a brand-new 1955 356 Pre-A Cabriolet, configured in right-hand drive and one of the very first Porsches to be sold in the UK by Archibald Frazer Nash (AFN), the dealer which would go on to become the country’s sole concessionaire of the manufacturer’s products prior to 1965, when Porsche Cars Great Britain was established. Compared to the vehicles ahead and behind, this sensational four-wheeler — carrying registration number 427 DMP — looks as though it has joined the cavalcade from outer space, not Stuttgart. After all, the Porsche’s paintwork is Pearl Grey (a kind of sandy-beige), not black. 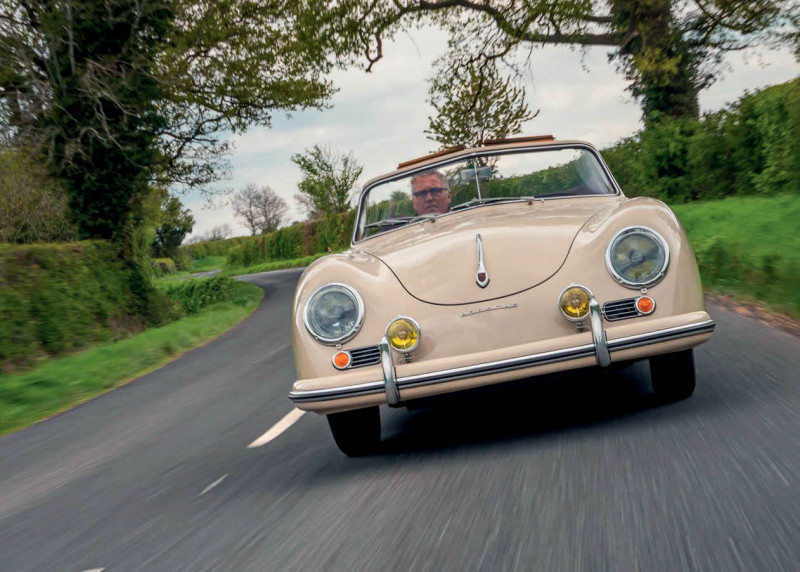 Chassis 60791 was completed at Zuffenhausen on 29th April 1955, a mere six weeks before its star turn in London. The further back in Porsche history you travel, the scarcer right-hand drive examples of the manufacturer’s output become. Considering the very first Porsche sale by AFN took place in 1954, it’s safe to assume 427 DMP is incredibly rare. In fact, according to Porsche records, it appears only ten right-hand drive Pre-A Cabriolets were built in 1955. It’s thought only two have survived to the present day. 427 DMP is one of them.

The very first Porsche, 356 no.1, was a two-seat roadster. Drop-top motoring exuded glamour and appealed to a post-war generation of drivers who wanted the thrill of touring, rather than simply viewing a car as a tool to get from A to B. Though Porsche’s early opentop success was the stripped-back, motorsport-oriented 356 Speedster (introduced in 1954), the 356 Cabriolet was luxurious and exotic, providing a cross-country driving experience characterised by comfort and rapid acceleration, certainly when compared to the vast majority of other vehicles on the road.

According to the factory Kardex, 427 DMP was sold to its first owner, a Mrs Mead, by AFN on 27th May 1955. John Adlington, head of AFN, remembered how her large dog would regularly break the passenger door window and how Mrs Mead would remain seated in her pride and joy whenever the resulting remedial work was being carried out. During her time in charge of the car, it was painted white and, in July 1962, was subjected to a new front end because of accident damage.

427 DMP changed hands in 1977, passing to a Mr Brierley of Rochdale, who had the car painted yellow and covered six thousand miles before selling to a David Cleaver of Coventry in 1982. Cleaver enjoyed sixteen years of happy motoring in the diminutive droptop before passing ownership to a Mr Barr of Horsham. A year later, fifth owner, Mr Parkinson, came on the scene, holding onto the Cabriolet for four years before its sixth owner, Mike Smith of Essex-based air-cooled Porsche restoration specialist, PR Services, added his name to the logbook.

“This 356 was quite a mess when Mike bought it,” explains current custodian, Mick Pacey, proprietor of classic Porsche restoration and sales specialist, Export 56. “Many years exposed to British weather had left the car in a fairly sorry state. Additionally, repair work carried out to the front end during Mrs Mead’s ownership used parts from later 356 production, though this wasn’t unusual practice back in the day. Unsurprisingly, recognising the rarity of this particular Porsche, Mike and the PR Services team decided to treat the car to full restoration. Award-winning Volkswagen and Porsche body repair outfit, Sportwagen, took care of the metalwork and paint.”

The body was stripped back to bare metal before being meticulously returned to period-correct specification. All removed parts were inspected and documented, though despite the presence of the original gearbox, the car’s 1.5-litre engine had been removed and replaced with a 1.6-litre unit many years beforehand. This wasn’t an uncommon occurrence back when air- cooled Porsches weren’t worth what they are now — many owners wanting more power from their 356 would happily ditch the original Porsche flat-four in favour of a bigger-displacement, higher-output unit, perhaps even making use of a tuned Volkswagen powerplant. Regrettably, the removed engines were often sold on, as opposed to being kept in storage.

Wind the clocks forward to 2016, and Mick bought the Cabriolet in part-rebuilt condition from PR Services on behalf of a keen Export 56 customer. “Initially, he told me he wanted to buy a 356 Speedster and asked me to inspect and purchase an example going under the hammer at an RM Sotheby’s auction in Battersea. The car was one of only a handful of right-hand drive 1955 356 Pre-A Speedsters assembled, but I reasoned it was going to require massive spend to restore to concours specification.” With this thought in mind, he suggested his client take a look at the wider range of al fresco 356s from the period. Herein lies an important consideration if you’re thinking about buying a Porsche of this vintage — Zuffenhausen has always had a complex product line-up within each year of manufacture. Where, say, Mercedes-Benz restricted its same-age cars to one or two variations, the wide range of body styles, trim options and engine choices offered by Porsche made for an extensive catalogue of vehicles during each model year. In other words, try not to be guilty of tunnel vision when considering your dream drive — you’ll make life far easier for yourself (and your wallet) if you incorporate the wide range of Porsche products for a given year when conducting your search.

“Many people don’t realise the extent of the 356 line-up during each period of the model’s time in production. Some even assume all drop-tops are Speedsters,” Mick shrugs. Recognising his client’s desire for a rare, early right-hand drive 356 lacking a roof, the availability of Mike’s already restored Pre-A Cabriolet — albeit taking the form of a rolling body accompanied by many boxes of parts — triggered a chain of events leading to the car being transferred to Export 56’s base in Cranfield, Bedfordshire, where the process of reassembly, including restoration of the running gear, interior, engine and transmission, began. Who needs a Speedster, anyway?! A year earlier, Mick was in the process of buying parts from Paul Smith at PR Services when the most unlikely of discoveries was revealed. A customer of the Billericay-based business had invited Paul to purchase a stockpile of old Porsche parts from a deceased estate.

While he was sifting through what was on offer, he stubbed his toe on a large object hidden by a plastic cover. Beneath it was flat-four no.34694, 427 DMP’s original engine! This amazing find allowed Export 56 to acquire the car as a complete package — it’s thought to be the only surviving right-hand drive 1955 356 Pre-A Speedster retaining its matching-numbers powertrain. “The car is currently utilising its replacement engine, but we will be reinstating the original boxer as soon as we’ve finished rebuilding it,” Mick confirms.

Those with a keen eye will have noted another deviation from standard specification — the car was originally assembled with wheels and tyres different to what’s pictured on these pages. “When it comes to restorations and air-cooled Porsches as rare as this, while we love absolute accuracy, there’s no getting away from the fact a 356 Pre-A in stock trim isn’t brilliant to drive,” Mick reasons.

“By 1955, these cars were getting much better, but their sixteen-inch wheels and crossply tyres are nowhere near as surefooted as the later, wider fifteen-inchers, which benefit from radial rubber. Porsche realised it needed to promote more contact patch with the road and also recognised its cars needed quicker, quieter engines — beyond 40mph, it’s easy to feel out of touch with what’s happening in a 356 Pre-A, which is why our client wanted to update 427 DMP with these more compliant wheels and tyres whilst retaining use of the 1.6-litre flat-four.” The original parts were kept to one side, ensuring they remained with the car as part of a complete Porsche package when it was time for another change of ownership, which occurred earlier this year.

The new (eighth) owner instructed Mick and the Export 56 team to resurrect the original four-cylinder boxer, which will return to its leather-lined engine bay in readiness for this rare Porsche’s own Platinum Jubilee, which takes place in April 2025, marking seventy years since the car’s original date of manufacture. Will it be driven down The Mall in honour of the occasion? We wouldn’t bet against it.

Below The original engine, miraculously discovered by the PR Services team when inspecting a job lot of parts from a customer’s estate.

Above One of only two surviving right-hand drive 1955 356 Pre-A Cabriolets and, thanks to the chance find of its original engine, thought to be the only matching-numbers example.

Above Interior is a work of art and has been fully restored during the car’s time in the custody of Export 56.

Below The highlight of the Automobile Association’s golden jubilee cavalcade, watched by thousands of spectators in and around Regent’s Park in 1955

ORIGINAL PARTS WERE KEPT TO ONE SIDE, ENSURING THEY REMAINED WITH THE CAR AS A COMPLETE PORSCHE PACKAGE