For over 60 years, Porsche’s GT division has delivered landmark cars to thrill enthusiasts. We gather two heroes that bookend this span to discover where the magic really began to bloom…

The original lightweight legend of the GT division fronts up to the modern-day master. All that matters is driving purity

Unless you’re attempting a triple stint at Le Mans, driving a modern performance car quickly is actually pretty easy. Physically, I mean. Hustle a grippy car up a sweeping section of road and the only physical stamina you really require is the strength to reach for the air-con controls. Just in case you get a smidge warm. 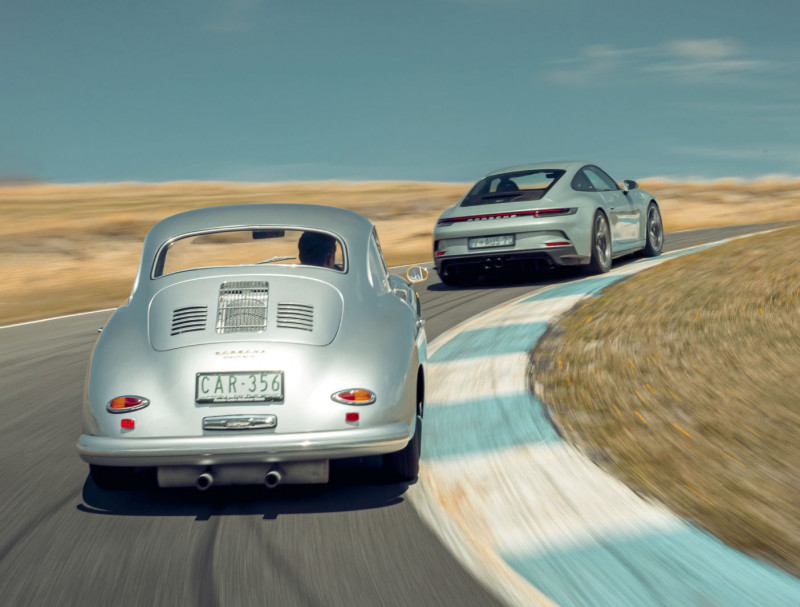 But this? This is hard work. I’m sweating. Breathing hard, too. And my forearms hurt. And yet, as I pitch the gorgeous Porsche 356 into another corner and feel its narrow 15-inch tyres start to slide, ever so gently, I can’t help but think modern cars might have lost something. Because this is about as good as driving gets… The 356 inflicting the physical discomfort/euphoria is no ordinary old Porsche. If you know your classic Porkers you’ll probably have already spotted the extra horizontal louvres sliced into the engine cover, the slimmer chrome bumpers and the worn leather straps that operate perspex windows. All of which indicate this is a 356 Carrera GT. 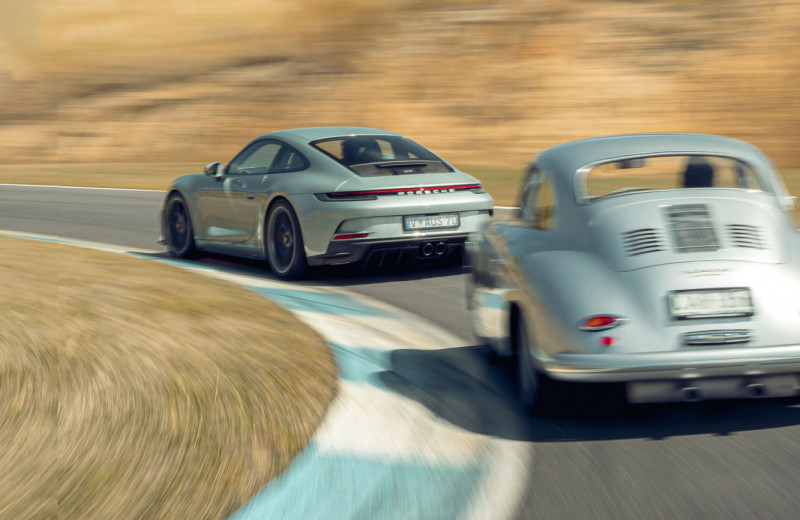 Today Porsche will happily sell you a lightened, hardcore model adorned with an exotic engine taken from its motorsport department. It’s called the 911 GT3. But if you wanted that exact same thing back in the 1950s, well, you had to buy a 356 Carrera GT. It’s lighter than a regular 356. More focused. And its engine isn’t the usual pushrod 1.6L unit but a more powerful and fiendishly complicated four-cylinder boxer designed by the legendary Dr Ernst Fuhrmann for the 550 Spyder.

It’s also tiny, almost dainty. It’s so small that it makes the modern GT3 we’ve brought along for this test look cartoonish and enormous. Philosophically the 992 GT3 is a direct descendant of the 356, but in appearance, it looks more like a distant cousin than great-grandson.

We all know modern cars have become bloated and enormous but it’s not until you clock this pair side-by-side that the growth over time really hammers home. Next to the petite and unadorned 356 the modern GT3 looks like a fighter jet. It’s impossibly wide, voluptuous and with its collection of slats, vents and intakes, it verges on sinister. And don’t even get me started on its tyres. Dropping to the ground to examine the rubber on offer is like seeing a goldfish swim into the shadow of a whale.

Like the 356, this particular GT3 is something special. Officially it’s dubbed (deep breath) the Porsche 911 GT3 Touring 70 years Porsche Australia Edition. Like the 356 it’s rare – only 25 examples exist for the princely sum of $494,400 – and naturally they’re all sold. But this GT3 is still worth exploring for a couple of reasons: it’s the first time Porsche has allowed a market outside of Germany to make a special edition based on a GT car, and the spec changes are tastefully done. And it’s also our first chance to experience the 992 Touring package on Aussie soil. 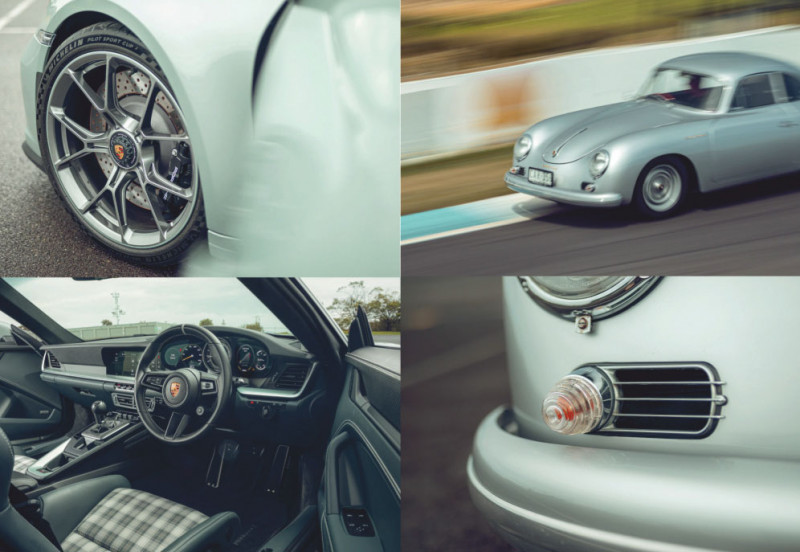 The spec changes made to create a 70 Years edition are all cosmetic. ‘70 years’ decals feature on the door sills and dash inlay, a plaque is stuck to the B-pillar, the cabin is trimmed with unique leather work and the exclusive alloy wheels have their outer edge finished in body colour. Just don’t nick one on a kerb. We shudder to think what the repair bill would be…

Oh yes, the paint. It’s an important visual change because it provides yet another link to the 356. Officially Porsche calls the colour Fish Silver Grey Metallic (in the metal it’s actually a beguiling shade of pale green) and it pays homage to the very first Porsche imported into Australia in the 1950s – a pretty 356 Cabriolet. So it’s not just engineering philosophy linking this pair of Porsches. Time ties them together, too, and it’s this connection, forged over 70 years, that we want to tease out.

We start in the 356, mostly because it feels right to tackle them chronologically, but also because I sense it’s going to ask some uncomfortable questions about what’s happened to driver involvement over the last six and a bit decades… Initially it feels wrong to drive the 356 hard. Porsche only made around 100 GS and Carrera GTs between 1958-’59 and just three of those were right-hand drive. That rarity makes it incredibly valuable – at least $1.2 million in today’s market by Porsche’s estimation. Plus, car years are like dog years and by any measure the 356 is a pensioner.

At low speed, it’s grumpy. Peevish. Drivability and tractability are not strong suits but I quickly realise this is my fault, not the car’s. Fuhrmann’s engine was built to tolerate the abuse and stresses of racing, not to be coaxed around at low speed. It idles, lumpily, at 1000rpm and below 4000rpm it feels concerningly flat. It’s not until you get it on cam that it truly starts to come alive. It’ll spin all the way to 7500rpm and once you realise you need to keep it high in the rev range, it feels, and sounds, genuinely exciting. The exhaust has fewer baffles than a regular 356 and the soundtrack is unlike anything else I’ve experienced. I was expecting undertones of Beetle but the Carrera GT has a sonic signature all of its own. There’s plenty of volume but it’s the way the exhaust note hardens as the power builds that makes it so addictive.

Outputs aren’t huge. We only have 86kW and 135Nm to play with but remember, the Carrera GT is light. The body is based on the same Reutter-built steel shell as the 356A but everything that swings – the doors, the bonnet and the engine lid – are all made from alloy or aluminium. Officially Porsche says the kerb weight is around 880kg but it feels lighter than that. By modern standards, though, this is a slow car. Acceleration is swift rather than fast (0-62MPH / 0-100km/h takes around 11.0sec) but not once did I find myself wishing for more speed or power.

Most of that is down to how physical it is to pedal quickly. The steering, which you tackle via an impossibly large and link between the 356 and Porsche’s latest motorsport special? Those questions require further exploration…

Jumping into the modern GT3 requires a swift recalibration. After the heavy-set pedals in the 356, the 992’s clutch is so light and springy that I stall it immediately. And even though it feels enormous compared with the old car – the 992 is the largest GT3 ever thanks to a body that’s 11mm longer and 8mm taller – it reacts so quickly to your inputs that, initially at least, it verges on hyperactive.

Credit that to seven decades of engineering progress but also to the chassis changes made for this generation of GT3. The front suspension now comprises double wishbones instead of the previous strut arrangement and the nose of the car is noticeably more eager. Four-wheel steering also contributes to the newfound sense of agility and the level of grip on offer from sticky Michelin Pilot Sport Cup 2s (255/35 ZR20 up front, 315/30 ZR21 out back) is absolutely immense.

Just don’t make the mistake of thinking the ‘Touring’ spec means it’s softer in any way. This car is just as hardcore as the regular be-winged GT3 with no concessions in the suspension set-up for comfort. That means it can feel decidedly stiff on gnarly B-roads but the trade-off to this tautness is incredible precision and control.

Happily it also means the powertrain is exactly the same 4.0-litre flat six as you get in the regular GT3, too. Power and torque haven’t changed dramatically compared with the old 991 GT3, but with outputs of 375kW and 470Nm this remains a seriously quick car. And just like 356, the GT3’s magic lies in how the power builds to the 9000rpm redline, the linearity of the delivery and the crispness of the throttle response. Unlike the previous GT3 Touring, which was manual only, Porsche is offering a seven-speed PDK this time around. It’s a fantastic gearbox but we’re pleased to report the majority of owners of the 70 Years edition went for three pedals: 17 manual versus eight PDK. It’s a smart decision. The manual shift is crisp, accurate and even though it makes the GT3 slightly slower than the auto, it adds an extra layer of involvement as you try to wring every last rev out of the 4.0-litre flat six.

Pedal the GT3 hard after driving the 356 and it’s not so much on another level for grip, power and poise as it is on another planet. Yet there are still similarities between them. Both get better the harder you drive them. Both have engines that demand revs and deliver melodic top ends. And because those engines are behind you, they way they feel over bumps and how they need to be driven to extract their best is eerily similar, too. We might think of Porsche’s GT Division as a relatively recent phenomenal, but the 356 shows the same kind of thinking was well and truly alive back in the ’50s.

So which would I have? Of course by every objective measure the 992 GT3 is superior. It’s quicker, grippier, more capable, safer, cheaper, and by modern standards, is incredibly visceral to drive quickly. And even though the 70 Years is officially sold out, the silver lining is you can buy a regular GT3 Touring for around $125K less and still revel in exactly the same driving experience.

But with the day drawing to a close, it’s the 356 I find myself edging towards for a final few laps. It’s more engaging, more fun and without question, more special. Have modern cars lost something? As the 356 buzzes and fizzes its way around the track, it’s hard to deny they haven’t. Progress is relentless but sometimes we get so caught up in what we’re gaining that we lose sight of the things that gradually fade away. And sometimes the biggest gains can be found by looking back. Now, time to give my forearms one last workout…

The 70 Years GT3 is impossibly wide and voluptuous; with its collection of slats and vents it verges on sinister

Only three 356 Carrera GTs left the factory in right-hand drive in 1959, with this particular example first owned by Victorian farmer David Calvert. He ordered it with ‘Field Green’ paintwork and it has racing provenance having been campaigned by Harry Firth at Sandown in the early 1960s. Gradually the car fell into disuse over the decades and was no longer in running order when it was bought by then Myer CEO and successful businessman Peter Bartels in the 1980s. Since then it’s undergone a bare-metal restoration and engine rebuild but Bartels found the car required more attention than he could give it so he swapped it with Porsche Cars Australia for a then-new 911 Carrera 4S. Time shows that wasn’t the smartest financial decision.

Below: 86kW never felt so lively and engaging.

Of the 25 buyers who bought the GT3 70 Years, 17 agreed this was the transmission to have. Below: ‘Madraskaro’ check fabric used for the deep buckets.

It’s not just engineering philosophy linking this pair. Time ties them together, too; a connection forged over 70 years