Porsche’s 911 Sport Classic 992 is back, with Turbo power, rear-wheel drive and a manual gearbox – and it’s every bit as good as that sounds. 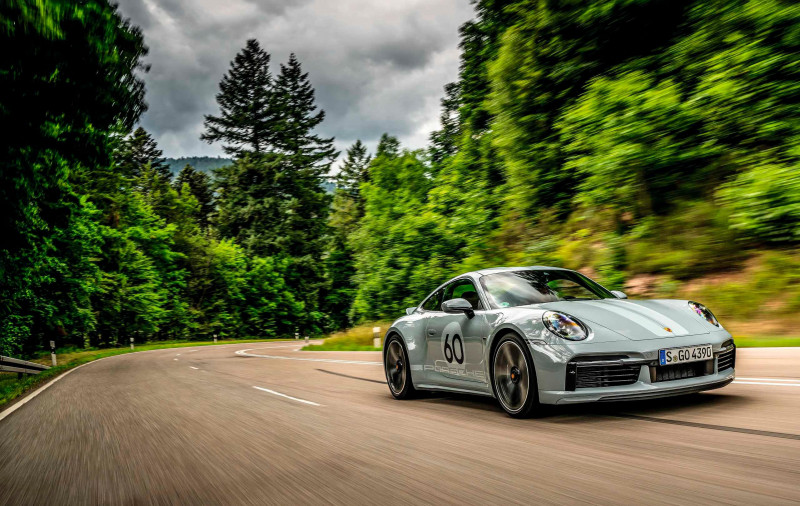 It’s 2009 and there is a new Porsche 911 doing the rounds. It’s based on the gen-two 997.2 but is wider of hip and dripping with aerodynamic appendages. Its 3.8 litres of flat-six are a harmonic ode to all Weissach has to give, revving to 9000rpm. Fire-retardant seats hug you tight, Alcantara covers the touch points, a half-cage fills the rear-view mirror. Vinyl graphics have been thrown at the bodywork, plastic replaces many of the glass windows, aircon and radio are left on the shelf. The greatest car evo will drive during its first 200 issues is born, the GT3 RS entering the history books unhindered. Sideways, too, most likely. Also in 2009 Porsche launched two further special 911s – variants that were even rarer and more bespoke than the unbeatable RS. Neither drew much attention except from those attracted to the work of Porsche’s special projects department, but both are noteworthy 911s in their own right. However, I’ll offer that one is more appealing than the other. The open-top, PDK-only Speedster was handsome-ish, but it played second fiddle to the Sport Classic.

‘IT FEELS VERY DIFFERENT TO ANY CURRENT CARRERA MODEL, JUST AS A GT3 DOES’

This isn’t because of some blinkered belief that all 911s should be manual (although it helps in the majority of cases), but because the Sport Classic was an even more exceptional car. A ducktail spoiler on a 911 was nothing new, but it had been 36 years since Porsche had last offered such an aero design. And while Fuchs alloys were synonymous with Porsche, a set hadn’t been officially fitted to a new 911 since 1988. Then there was the brown leather and houndstooth weave interior, the factory upgrade to its naturally aspirated engine, the custom chassis tuning, the wider body and the double-bubble roof. When RS models that are built in their thousands fetch a quarter of a million quid within minutes of reaching the second-hand market, I’ve often wondered why it is that when one of only 250 Sport Classics is offered for sale it struggles to fetch a price starting with a two. It’s more exclusive, has a unique character, and, until now, is a formula that Porsche hasn’t repeated. 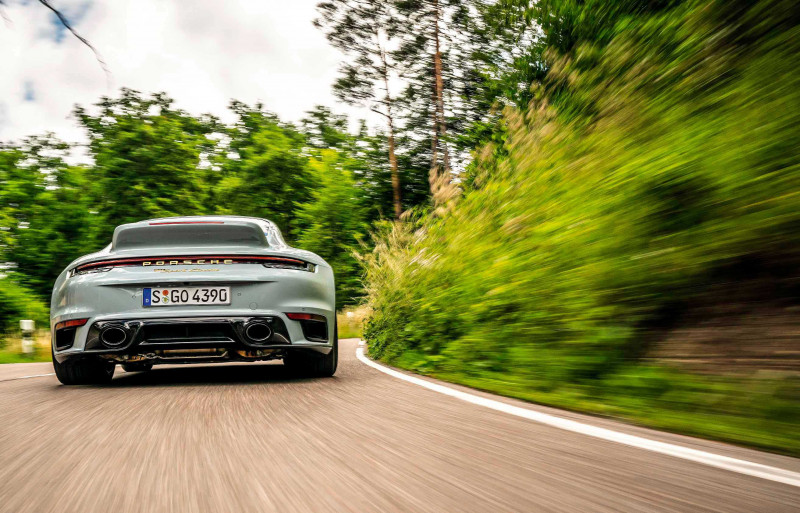 That repeat button has now been hit, however, and the result is a slow burner of a 911 that requires more than a cursory look and a few miles behind its wheel to reveal exactly what it is and why it’s such a compelling package. The design of the new Sport Classic is pure retro, picking from Porsche’s design heritage and once again seeing the wide hips of a 911 Turbo married to the ducktail wing of the original 911 RS, with polished Fuchs alloys glistening at each corner. Look closer and the lengths to which Porsche’s Exclusive Manufaktur department has gone will make you stop and drink it all in for far longer than perhaps your cynicism would initially allow. Tucked beneath the ducktail, which generates 50kg of downforce at over 180mph, is a full-width opening to feed the 3.7-litre twin-turbocharged flat-six with every last molecule of air it requires. And that’s not a small ‘t’ Carrera turbo motor, but a full-fat ‘T’ 911 Turbo unit, albeit one with the wick turned down to protect the seven-speed manual gearbox that drives only the rear wheels. We’ll get to these hidden details in a moment.

There’s a fair chunk of 911 Turbo in the new Sport Classic, much of it modified to suit the car’s mechanical, aerodynamic and design requirements. For example, while the rear haunches start life as Turbo items, once they are pressed to create their voluptuous shape they are finished without the signature intakes of the Turbo. This means that the tooling used to produce the panels for Porsche’s prototype models is used to create the Sport Classic’s rear quarters.

There’s also a fair chunk of carbonfibre used in creating the outer panels, specifically the bonnet and roof, with the central recess of the latter not only creating a ‘double bubble’ effect but also aligned to match the former’s own central inset design. The roof work isn’t as pronounced as on the original Sport Classic, but it’s a further layer of detail, along with the hand-painted stripes, that marks this latest version out as one of the quartet of heritage models the Exclusive department will produce. The first was the Targa 4S Heritage Design Edition launched in 2020, this Sport Classic is the second, and there are two more models yet to come (expect a convertible/Speedster-based car and potentially something frighteningly expensive based on a GT model). 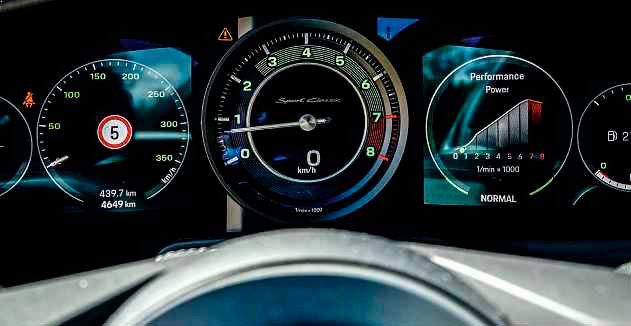 Inside it’s once again a riot of houndstooth fabric, joined by tightly stitched tan leather, dark green paint for the instruments’ faces and subtle strips of natural wood that are far better to look at and touch than you might imagine. It feels very different to any current Carrera model (although some of the features are available as upgrades on other 911s), just as a GT3 does.

It still feels a little strange to be in a 992 and find three pedals in the footwell and a lever protruding from the centre console that requires directing around an H-pattern gate, but, like its forebear, the new Sport Classic is manual only. This time it uses the seven-speed unit that’s available in the Carrera S and GTS rather than the six-speed ’box that’s fitted to the GT3. The latter was dismissed because it would be too close to its torque limit for comfort when working with a Turbo engine, even a detuned one, and also because mating it to the Turbo motor would be a costly exercise, whereas the seven-speed’s PDK-derived casing bolts straight on with little additional modification. That engine, then. It starts life as the lowertuned, 572bhp unit from the non-S Turbo.

Another 30bhp is then taken away, along with a more sizable 111lb ft of torque, leaving 442lb ft, to save the clutch, the rear tyres and the driver’s blushes. It retains that slightly gruff, harder edge of the Turbo engine, though, still breathing through a bigger pair of lungs and delivering a deeper underlying tone as a consequence.

There’s a lightness to the clutch that can catch you unawares when manoeuvring around a car park at walking pace, but as you’d expect from such an engine and gearbox combination, this is a car you are able to drive using only every other gear, such are the reserves of energy that are always primed and ready. Skim the surface and you might feel the Sport Classic is more an extension of the Carrera line rather than something that claims to be a cut above a 473bhp GTS. But time and miles help the SC’s character bubble to the surface, allow its personality to present itself and its charms to woo you. 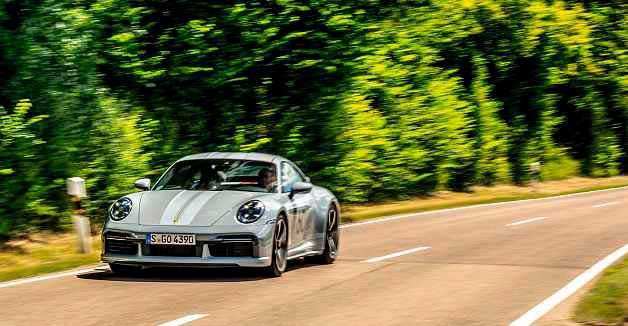 It’s not that it wants to be dragged by its scruff and thrown at every braking point so that the standard-fit carbon-ceramics (don’t let the black calipers trick you) start to sweat, nor launched out of every corner with a bootful of torque and the air thick with vaporising Pirelli P Zeros, but the more you begin to enjoy its wide performance band, the more characterful and engaging the car becomes.

More detailed and natural steering than a Carrera’s puts you immediately at ease, and with each corner you lean more on the Sport Classic’s hybrid tune of GTS and Turbo PASM chassis. Soon you reach the point where the car rotates neatly around your hips as it cuts through a corner’s apex and pours out onto the next straight with enough athleticism for you to be excited, but a level of measured calmness that ensures you remain cool and collected. It’s not as explosive as a Turbo, lacking that violent shove of acceleration, but it’s noticeably more responsive than a Carrera and a more nuanced 911 as a result. This powertrain in a more focused, rear-drive Turbo would be something else, not that Porsche will confirm anything of the kind other than saying it doesn’t talk about future products. But should it find itself utilising this powertrain elsewhere, the shift action between second and third, and also fourth and fifth, would benefit from some fine-tuning, as currently it’s not as intuitive as you expect, often resulting in a baulked change. Even after 750,000 development miles, including high-speed testing at Nardo and the Nürburgring, the shift doesn’t quite feel Porsche-precise.

As a whole the Sport Classic not only looks special but it has its own unique character. The stickers are a little OTT (they can be deleted, or peeled away), and it’s more a GT car in the traditional sense than a GT department 911, which some might not be expecting, especially given the £214,200 asking price. But when you can spec a Carrera GTS to the wrong side of £150,000 and a Turbo close to £200,000, with neither offering the full bespoke nature of the Sport Classic, it’s a car that adds up to far more than the sum of its parts.

Below and opposite: Sport Classic will be the most powerful manual 911 to date; 1250 will be made – some five times more than the original.