Peter Cornwell could have created his own impressive vintage car show with all the cars he had in his wedding fleet, but after retiring from the business and disposing of most of his fleet, one special pre-war Yank has stolen his heart…

SOMETHING OLD, NEW AND BLUE

More often than not, we take a few photographs of the owner posing with their car whenever we carry out a photo shoot. Some may be keener than others to participate, but we can’t think of anyone who posed so naturally with their car than 66-year-old Peter Cornwell. The reason behind Peter’s unusual talent is thanks to a wealth of experience in the spotlight during the 30 years he spent running his own wedding car business. There were no Bentleys or Rolls-Royces in Peter’s fleet; his firm favourite to get you to the church on time was nothing less than a Thirties Buick. Now retired, but still quite happy to pose with his car, Peter has equipped himself with this stunning 1941 Cadillac Convertible Coupe De Ville to keep him occupied. 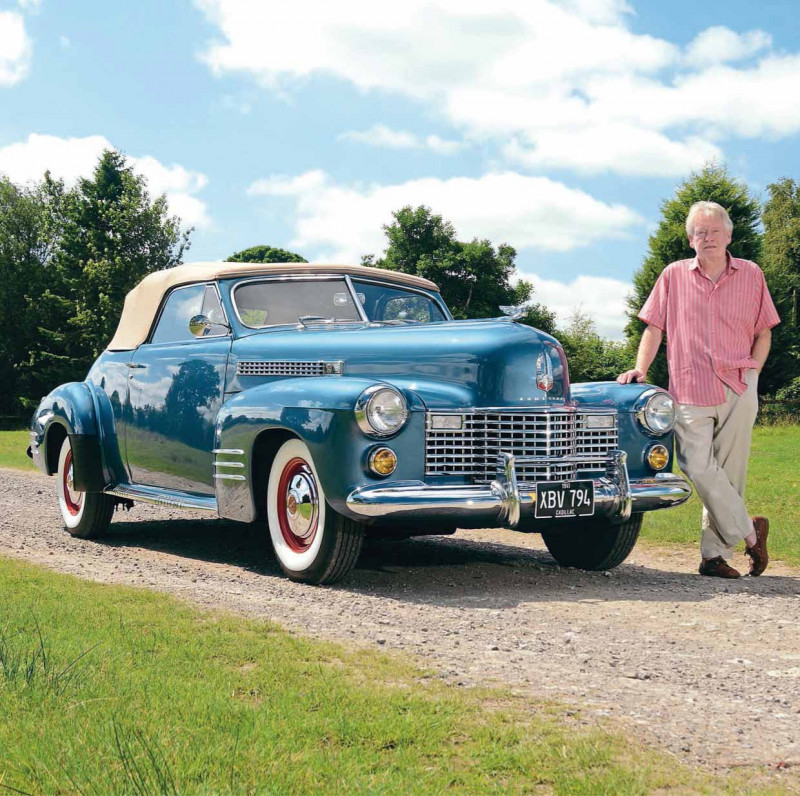 Peter’s early career years were spent in engineering and manufacturing, although he’s always had a fascination with cars that are just that bit different: “I bought a 1951 Ford V8 Pilot in 1978, a time when most people would just throw them away,” Peter smiles. “I’m a huge fan of Happy Days and The Untouchables which is probably where my inspiration came from.” The Pilot remained with Peter for three years, then family commitments saw that car replaced by a comparatively uninspiring, but now highly desirable Mk1 Cortina GT. “I moved on to a 1960 Lincoln Continental which I spent four years welding and restoring,” Peter remembers. “I only ran it for two weeks before selling it.”

“I KNEW I’D HAVE TO SELL MY HARLEY TO FUND THE PURCHASE, BUT I FELT IT WOULD BE WORTH IT.” 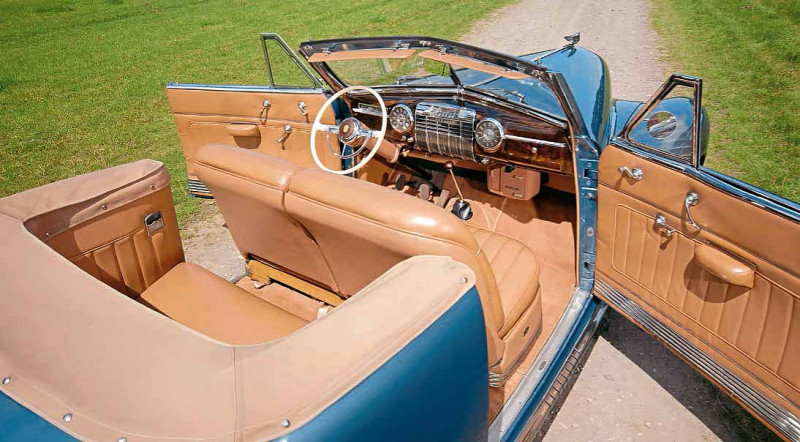 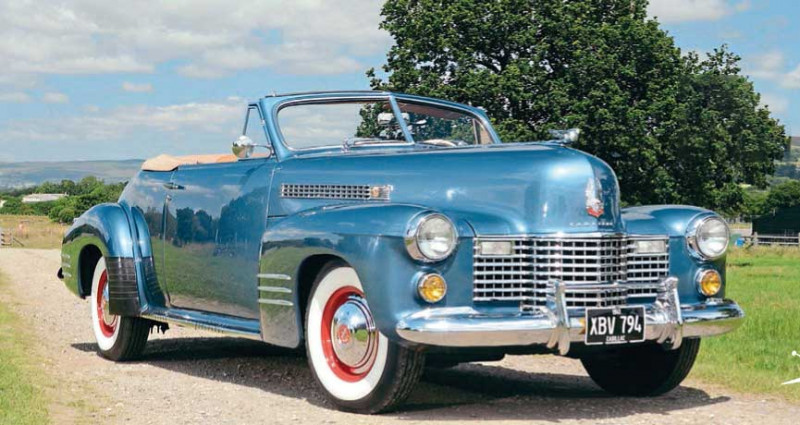 All this took place back in the Eighties when cars of the Sixties were still commonplace. Peter then decided to turn his attention to vehicles from a much earlier generation. “I went out and bought a 1930 Buick as it had the Al Capone gangster style I really like,” Peter remembers. “In fact, I liked it so much, I had a second 1930 Buick imported from the States.” Peter decided to sell the first Buick and restore the second. “It was the first full bare metal restoration I’d carried out,” he recalls. “I ensured all the work was done to a very high level.” Peter’s handiwork hadn’t gone unnoticed and before long he was asked if he’d like to hire out his car for weddings. This soon snowballed into a succession of weddings, and the idea of turning his love for classics into a business soon beckoned. “I imported another 1928 Buick as a back-up car and, aged 49, I now found myself with a new full-time business,” Peter explains.

At this point, Peter could have continued alone as the sole wedding car driver if he’d wished, but the phone continued to ring and he soon found himself with multiple bookings on the same day. “I began employing drivers as my business grew,” Peter tells us. “I also needed to expand my fleet too.” Yet another 1931 Buick predictably arrived followed by a Beauford, a popular wedding car favourite. “The Beauford had a normal synchromesh gearbox as opposed to a crash box, so it was much easier to drive,” Peter continues. “I wasn’t ready to give up on the classics though.” In fact, Peter could have created his own impressive vintage car show once the 1930 Cadillac and 1918 Hudson had joined the ranks too!

The wedding car business continued to thrive for more than 30 years, and these were great times for Peter. “The only real problem I had was as the older drivers left, any younger replacements struggled to operate a crash gearbox,” he says. “In 2018, I began to wind things down and did just 40 weddings that year with one car.” At its peak, 120 weddings each year were typical, and Peter’s chosen pre-pandemic date of retirement proved to be wise. “I sold the business to a relative of an employee along with the Beauford,” he remembers. “I sold all the remaining cars and kept just two.” 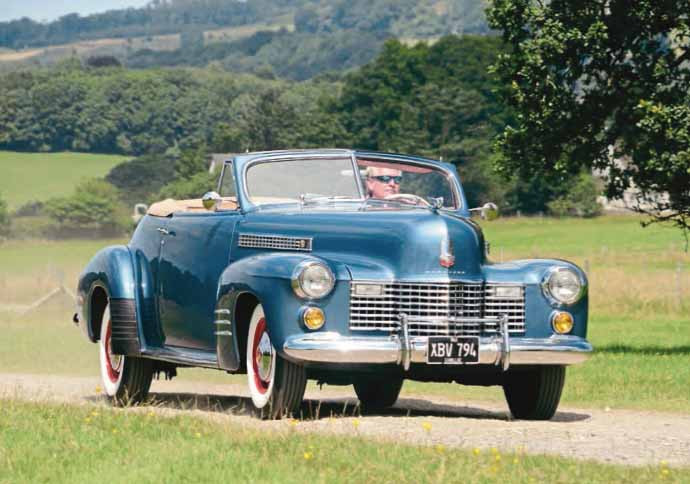 Among these was the 1918 Hudson, but by now he’d also acquired a 1928 Buick two-door Roadster from Australia, which he kept too.

“I planned to make the most of the spare time I had which included taking longer trips,“ Peter recalls. “Unfortunately, neither of my classics was practical for driving long distance so I sold the Hudson to buy a slightly newer car.” When we say newer, we’re still talking 1948, but to Peter that would mean a car still in its youth. “I drove to Glasgow to check out a 1948 Oldsmobile, but it was in extremely poor condition,” he remembers. “I did like the styling and began to seek out similar cars from that era.” 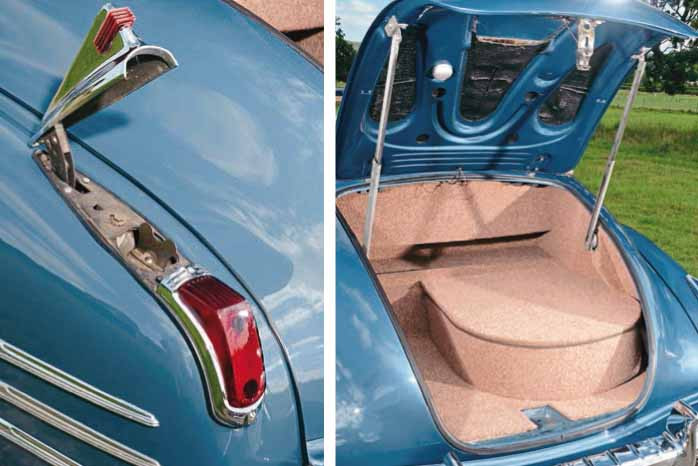 Above left: A fine place to be seated, although no seatbelts! Above middle: Clutch pedal reveals that this was originally a manual car. Above right: Cadillac’s marketing relied heavily on its entry price point of $1345, although with options, purchases would likely be more.

It would be a trip in the opposite direction which would prove to be more fruitful, namely the All American Car Show situated in Yate, near Bristol. “I spoke to a friend there who knew of someone selling a ’41 Cadillac Coupe,” Peter explains. “The car was fine, but I just knew I couldn’t live with the colour.” The disappointment wasn’t to last long. Incredibly, the Cadillac owner mentioned he had a second example in his garage at home and invited Peter to take a look. Painted Monica metallic blue, Peter was amazed at the condition of this second car. “It was twice the money as the Cadillac I’d seen at the show, but it was a much nicer car,” he smiles. “I knew I’d have to sell my Harley to fund the purchase, but I felt it would be worth it.”

The deal was completed by summer 2019, perfectly timed for open-top motoring and Peter wasn’t to be disappointed with his latest acquisition. Having spent much of its life in Pennsylvania, Peter discovered his Cadillac Convertible Coupe De Luxe had been restored around 2003. “It then moved to a keen Cadillac enthusiast in Florida and remained there until he passed away,” Peter explains. “In 2015, it was shipped to the UK.” 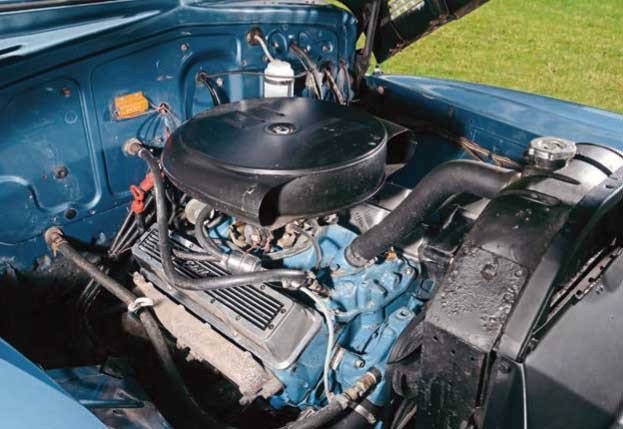 Compared to those earlier Buicks, the styling of this ’41 Coupe De Luxe is comparatively futuristic; aerodynamics had by now begun to be considered by manufacturers. There were a few noticeable firsts for Cadillac too, such as the headlamps situated within the wings, that infamous egg-crate style grille and the fuel cap located within the rear light cluster. “It originally had a 356cu in side-valve V8 and column change gearbox,” Peter points out. “During its time in Florida, these were replaced by a 350cu in small-block V8 coupled to a 700 R4 auto transmission.” The original engine and box came with the sale of the car and Peter is planning to hold on to them in case a future owner chooses to return the car to its factory specification. Until you open the hood, you’d never realise there was an engine conversion at all, even a dummy clutch pedal has been retained for that extra touch of authenticity.

“The hood is vacuum-operated and straightforward to put up,” Peter points out. “It’s a joy to drive on a sunny day.” The tan leather, metal dash with wooden trim and those classy dials all adds up to a plush and highly inviting interior. The coil springs at the front, leaf springs at the rear and lever arm shock absorbers provide a cosseting ride, though the standard drum brakes required some improvement. “I’ve installed a Willwood dual-circuit master cylinder which has made the car much safer to drive,” Peter tells us. “I’ve also fitted new wheel cylinders, wheel bearings and drums too.” The suspension bushes have also been replaced and Peter has fitted a fresh carpet inside the spacious boot to tidy things up.

Just as hoped, the 81-year-old Cadillac has proved to be a great long-distance cruiser and can easily cope with a 400- mile round trip. “I’ve taken it to many shows where it receives plenty of admiration,” Peter smiles. “Winning a trophy for Best Convertible at Stars & Stripes was a sure high point.” In fact, Peter has become so smitten by his ’41 Cadillac, he’s now sold the last of his long line of Buicks. “It was a sad day when I said goodbye, but the Cadillac drives so much nicer,” he tells us.

“The Buick spent most of its time not being used in recent years.” We’re sure Peter will be making a return to the show scene over the summer. Don’t forget, if you spot his ’41, we’re sure he’ll be more than happy to chat about it.

Although currently running a modern engine and ’box, the originals remain with the car. Power hood is vacuum-operated. Hidden fuel filler. Boot is equally immaculate.

Above: Hydra-Matic made its debut with Cadillac in 1941. Below: Power train is a 350cu in small-block V8 coupled to a 700 R4 auto transmission.