After it won the 24-Hours of Spa in 1997, this E36 Super Tourer ended up mothballed in a museum in Japan. So, what is it doing at Donington Park? Enter ex-BTCC champion Andrew Jordan… Words: Dan Bevis. Photography: Chuff @ Well Chuffed Media.

Cast your mind back to July of 2021. A month of polarised meteorology, pinwheeling between heavy downpours and glorious sunshine, the atmospheric confusion mirroring that of the populace who, rubbing their bleary eyes and stepping outside into the light, began to come to terms with a cessation of lockdowns. The possibility of mingling with other humans in a recognisable pre-pandemic fashion was hovering tantalisingly on the horizon. 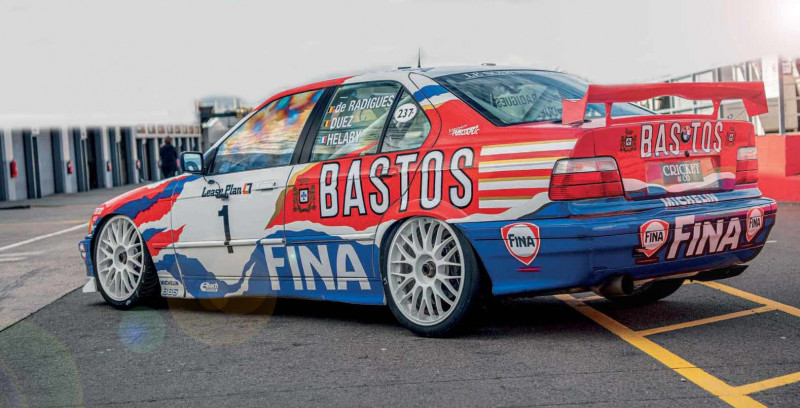 And at the forefront of this delicious taste of normality was the Goodwood Festival of Speed, running as part of the government’s pilot scheme of closely regulated events with keen monitoring of vaccination status and testing, allowing the crowds to return to the UK’s premier celebration of multi-marque and multi-discipline automotive splendour. With the event having taken a necessary hiatus in 2020, fans and regulars were champing at the bit to return. And as we found ourselves ambling across those verdant and storied lawns, not quite believing our luck after so many months cooped up in enforced exile from humanity, the familiar sounds and smells enraptured our sense like manna from heaven.

“The car was exactly as it had finished, in periodperfect but raced condition.”

If you were there, perhaps luxuriating in the sunshine beside the fabled hillclimb track with a glass of bubbles in hand, you may recall hearing a particular type of noise. Somewhere between a howl and a grunt, like a swarm of agitated hornets having a disagreement with a bear, Dopplering past the hay bales in a flash of blue and red. Record scratch, freeze-frame, and you spy the retro colours of the old-school Bastos livery… but this is no Rover SD1 or V6 Capri. This is an E36. And as realisation begins to dawn, a cornucopia of motorsport memories come flooding vividly back.

Now to cast your mind back yet further, this time to April 17th 1995, Brands Hatch, with the Super Touring-era heroes of the British Touring Car Championship tackling the Indy circuit in typical shoulder-rubbing style. Rickard Rydell dominated qualifying in the Volvo 850 saloon (the estate version having been subbed out for this season), Paul Radisich and Kelvin Burt scooped fastest lap honours in their Valvoline-liveried Mondeos, and Tim Harvey found himself on top of the podium in the sister Volvo. And perhaps the coolest car on the grid wore colourful chequered flag livery and promotional flashes for the new Bond flick, Goldeneye. Johnny Cecotto and David Brabham were the noble pilots in BMW Motorsport’s E36 racers, a last hurrah for the 318i which was due to be replaced by the improved 320i Super Tourer in 1996.

These were heady times for Touring Car racing – not just for the open paddocks with free and easy access for spectators to wander in and pilfer posters and team-branded hats, nor for the extravagant moustaches worn by the drivers, but for the fact that the budgets for development were soon to become eye-wateringly huge. This was the evocative era from which sprang some of the most thrilling and uncompromising tin-top racers of all time.

And across the channel in mainland Europe, things were becoming equally exciting. As Super Touring exploded in popularity for fans of the BTCC, the rule-makers in Germany were carving their own path for the DTM, and similar machinations were afoot for the ITCC over in Italy. As developments reached fever pitch, the ADAC in Germany hosted a Super Touring Cup series, a calendar that included 24-hour races at the Nürburgring and Spa-Francorchamps, and BMW Motorsport GmbH was ideally placed to scoop up the silverware. After all, in the E36, they had a devastatingly effective race car – a chassis that had proven itself in Touring Car series across Europe, that had shown itself to be so successful that a factory-backed Schnitzer team even entered one into the Japanese Touring Car Championship and cleaned up. The 318i had been dominant in the BTCC from 1992-95 and, with a new engine developed for the 320 ST, it was time to strike.

The car you see here is what resulted from all of these cacophonous and visceral elements coalescing into one furious and glorious entity. Chassis number 95/031, this E36 was built in 1995 by BMW Motorsport GmbH to be campaigned in the Super Touring Cup by Team Bigazzi. Its 2.0-litre four-cylinder engine produced in the region of 280hp with a howling redline of 8,500rpm, its chassis was a known quantity that had continuously evolved, and the platform was widely revered as a very serious contender indeed. Team Bigazzi was also the chosen equipe to campaign the McLaren F1 in 1995, so all the pieces were slotting neatly into place for victory – and that proved to be the case in magnificent style. This very E36 won the Nürburgring 24-hour race in 1995 with Roberto Ravaglia, Marc Duez and Alexander Burgstaller driving. And that wasn’t all: the following year, this car won the Spa 24-hours, this time with Burgstaller joined by Jörg Müller and Thierry Tassin.

And for good measure, the car returned to Spa once again in 1997, winning its third major endurance race at the hands of Dider de Radiguès, Marc Duez and Éric Hélary. Such was the phenomenal success of this mighty race car that BMW Motorsport GmbH gifted it to Gabriele Rafanelli, owner of Team Bigazzi, in late 1997.

So where has it been since, and why is it here now? Well, there are two key players in the story – Matt Holme and Andrew Jordan.

The former is the racing driver and enthusiast who now owns the E36, and the latter is the ex-BTCC champion who now spends his days building and racing astonishingly detailed and fastidiously engineered competition machines of all kinds.

“I bought the car from Japan just prior to the first lockdown,” Matt tells us. “It had been in a museum all this time. The car was never crashed in its racing career and it hadn’t been used since that 1997 race; BMW provided Rafanelli with a brand new engine, and when the car was shipped back over to Europe I found that it still had the original battery for the fire extinguisher with an expiration date of 1998, and has the Spa circuit map stuck to the inside of the roof! It has its fuelling rig and many spares with it as well – a complete package.”

With the car in impressively original condition, Matt was keen to take a belt-and-braces approach to recommissioning it before getting it back out on track where it belongs. Having observed the extraordinary quality of the race cars coming out of the Jordan Racing Team workshop, he got in touch with Andrew via social media and the two immediately struck up a rapport.

“We had a chat about what needed doing and what was possible, and not long after that the BMW was delivered to us,” Andrew recalls. “I was keen to have a car with such history with us! In fact, we now have multiple cars of Matt’s here. When the E36 came to us it was like it had been in a time-warp, it was in perfect condition – apart from a few areas of very light surface rust, most likely from it being shipped over. The car was exactly as it had finished, and in period-perfect but raced condition.” The overall solidity and straightness of the car meant that the guys were starting from a rarefied position, as they weren’t staring down the barrel of a miasma of bodywork issues and structural hurdles that can dog so many other recommissioning projects – however, there was still hard work to be done.

“We had the engine fully checked at Neil Brown Engineering, mainly as a precaution as it had sat for so long,” say Andrew. “We had key items crack-tested, re-painted certain parts of the suspension, fitted a new fuel tank, rebuilt the diff, and had the dampers dyno checked. All of this was really due to the car having been sat doing nothing for such a long time, we had to make sure that everything was in peak physical condition and ready to be used just as it was in period. The first time Matt saw the car finished was actually when he drove it at Goodwood!”

That must have been quite a surreal experience for Matt, particularly given that – as we sat at the side of the hillclimb and watched it scything mere millimetres from the flint wall at breakneck pace – he certainly wasn’t hanging about. This car was designed for maximum attack from the off, and that’s precisely how it’ll continue to be used.

“We have kept to the exact same spec as when it originally competed,” Andrew continues. “A lot of people with these cars increase the engine size, but we have kept this – along with everything else – to the spec it would have raced.”

Matt nods eagerly in agreement. “That’s right, the philosophy has been to retain as much as possible that was original to the car,” he enthuses. “The idea is to try and run in some select events that are historically relevant for it. We would ideally like to enter the BMW into races at Spa and at the Nürburgring.”

Andrew is evidently very taken with this idea: “I think that would be really cool,” he smiles. “With the history it has there, it’d be amazing to take it back.”

And that, really, is the crux of the matter. Super Touring cars were so popular in the 1990s because, well, they were really cool – everyday people saw silhouettes of cars the same as those on their driveways (or, at least, scattered across their daily commutes) that had been reimagined into beguiling and thrilling racers. People could relate to them on a far more personal and tangible level than they could with, say, a Formula One car, and that’s a reality which endures. The extra layer of context in 2022 is that the E36 is now a bona fi de modern classic, which makes the evocative experience all the richer. Super Touring cars are magnificent things, and chassis number 95/031, with its wonderful history and sympathetic rebirth, is quite possibly the coolest of them all.

Endurance racing has roots right back in the early days of motoring, and 24-hour racing isn’t just about Le Mans. Indeed, the 24-Hours of Spa has been running annually since 1924 (aside from the odd break here and there for wars and what-have-you). Back in the first running of the race it was a case of drivers dicing with livestock on public roads between the towns of Francorchamps, Malmedy and Stavelot; the circuit as we know it today was inaugurated in 1979 and hasn’t changed a lot since. And you know which manufacturer has won the most 24-hour races at Spa? BMW, that’s who. Twenty-four separate victories. The Nürburgring 24-Hours was first run in 1970, and again has run every year since (save for a few years missed for oil crises and construction work). The race takes place on a combination of the fabled Norschleife and the GP track, the colossal scale of the venue allowing over 200 cars and 700 drivers to compete. And the most successful manufacturer at the ’Ring 24hr? Yep, it’s BMW again, who have crested the podium twenty times.